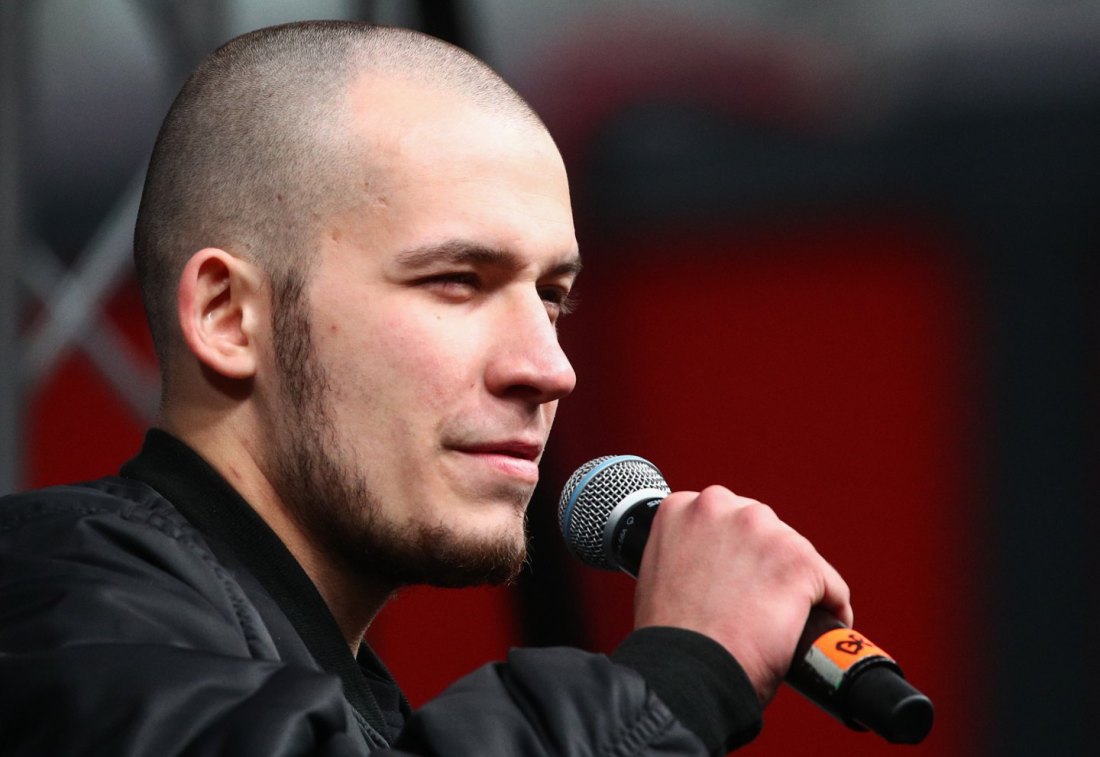 Vladislav Barabanov during a rally on September 29, 2019, on Sakharov Avenue in Moscow in support of suspects and defendants in the Moscow case, the Anti-Corruption Foundation (FBK) case, and Russia’s political prisoners. Photo by Sergei Bobylev. Courtesy of TASS and Republic

The Russian Investigative Committee has stepped up the investigation of the so-called Moscow case: five people were detained on October 14 and 15 and charged with assaulting police officers. In total, twenty-six people have been investigated as part of the case, which was launched in the wake of protests this past summer in Moscow; only six of them have gone free. One of them is Vladislav Barabanov, an anarchist from Nizhny Novgorod. He made a special trip to Moscow for the July 27 protest rally, was arrested on August 3 and charged with involvement in rioting, and was released from remand prison in early September. In an interview with Republic, he recounted how a video entitled “Our Attempt to Overthrow the Government” found its way into the evidence against him, how his jailers hinted he might be tortured, and what he talked about with Center “E” officers.

Prosecution
The wording of the charges against me was vague: “group of individuals,” “sprayed tear gas,” “destroyed property,” and so on. In my case file, however, there were two screenshots from a video that was uploaded, I am certain, by the very same police detectives who were involved in cooking up the criminal case against me. They created a channel on YouTube, calling it “Yegor Zhukov” [Yegor Zhukov, who has been charged in the Moscow Case and is currently under house arrest, is a student at the Higher School of Economics—Republic] and uploading a video entitled “Our Attempt to Overthrow the Government.” That was how this recording and two screenshots, in which I am seen marching in front of a crowd and waving my hand, were entered into the evidence. But I did not “coordinate” any riots.

The first alarm bell was at the detention center: someone from the Investigative Committee came there, wanting to interrogate me as a witness. Then I was detained as I was leaving the detention center, making it clear they would try to pin criminal charges on me. But I couldn’t imagine what would happen next and that so many people would be charged. I thought I would be the only one to face these charges.

Given the psychological pressure they applied in the investigative department, it was hard at first. There were these guards there, for example, who talked on the phone with someone and asked, “Where do we keep the gas masks?” I understand perfectly well how gas masks are used during interrogations. They are put on people’s heads as a way of forcing them to testify. Cigarette smoke can be blown into them or the air can be turned off so a person loses consciousness.

I had the support of family members and my comrades, who met me at the detention center after I did time there for administrative offenses. When they saw me being put into a police cruiser and driven away, they blocked the road and tried not to let it get through. They formed a human chain, but the police pushed them aside. Right at that moment, an officer from Center “E” (Center for Extremism Prevention) was sitting next to me in the car and videotaping everything. He wouldn’t let me contact anyone or take out my mobile phone, threatening to confiscate it.

Center “E”
Center “E” was intensely interested me back in Nizhny Novgorod, too. On September 9, 2018, we held an “unauthorized” protest march against the government’s raising the retirement age. Afterward, there was a wave of arrests, with the police detaining some people in their homes, and others at work. I was detained at a presentation of the almanac moloko plus. I think they knew me, because I was politically active in Nizhny Novgorod, doing solo pickets and helping organize events.

I didn’t say anything to Center “E” officers without a lawyer present. I was detained along with a comrade. He was released, but I was charged with involvement in an “unauthorized” event that had caused disruption to public transport and impeded pedestrians. They had a file with my name on it in which they rifled through papers. One of the Center “E” officers was really curious about what anarchists had in common with Navalny’s supporters. They were worried opposition forces were consolidating.

Anarchists
Since I was young, I guess, I have had a yearning for justice. I followed the Bolotnaya Square Case and all the events of 2011–2013. I was between fourteen and sixteen then. The first protest rally I ever attended was in Nizhny Novgorod on March 26, 2017, my birthday. Due to my age, I was not involved in the events of 2011–2013, but comrades say that rally, which took place after Alexei Navalny published his investigation of the corruption schemes in which Dmitry Medvedev was involved, drew a much bigger crowd. It was a really cool, very significant event: there had never been anything like it in Nizhny.

I didn’t go to protest rallies before that, although I was interested in politics. This was due to my personal rethinking of effective methods of struggle. First, there was the ideological aspect: perhaps I didn’t see any points of contact among the opposition. Second, I rejected public activism.

If we talk about the anarchist milieu and why I now call myself a libertarian socialist [libertarian socialism is a political philosophy focused on resisting authoritarian coercion and social hierarchy—Republic] the fact of the matter is that there are lots of stereotypes around the notion of anarchists, who are either imagined as subculture types with as subculture types with mohawk haircuts and the letter A on their backs, screaming “Anarchy is the mother of order,” or people in masks whose only thought is torching, blowing up, smashing, and destroying things, meaning anarchists are equated with terrorists.

As for methods, some anarchists consider it more effective to put up leaflets and stickers, do graffiti, and hang banners on the street—as long as no one sees them. Their public activism begins and ends there. But when they are confronted with crackdowns, they take to the public arena all the same, because only a huge public outcry can defend people from persecution.

I think that, if you want to promote your political ideas you have to be as public about it as possible. This will help you get around the stereotypes attached to the notion of anarchism and recruit people to your side.

I see anarchism as the endpoint in society’s evolution. It is what happens when people realize they are capable of solving their problems without recourse to any representatives whatsoever, when they realize they can organize themselves and their own lives. When the concept of centralization goes away, people won’t need power over each other.