Three activists—Anna Etkina, Elisabetta Corsi, and Anna Romashchenko—carried out a protest action, “War Is Not Fashionable,” at the debut of Black Star Wear’s new collection on Novy Arbat.

The rapper Timati designed the new collection in collaboration with Voentorg’s Russian Army clothing brand. Timati has promoted the collection as clothes for the country’s patriots, while spokespeople for Voentorg said the collection was based on values  like “strong leadership, patriotism, attention to detail, and full confidence in each new step.”

A target is depicted on the front of the t-shirts in Black Star Wear’s new collection, while the word “Syria” is embossed on the back.

The activists arrived at the protest in t-shirts similarly embossed with targets, but the backs of their shirts featured figures showing the costs of the war in Syria: the number of children killed (28,226), the number of Syrian citizens killed (223,161), and the number of refugees (4.8 million). 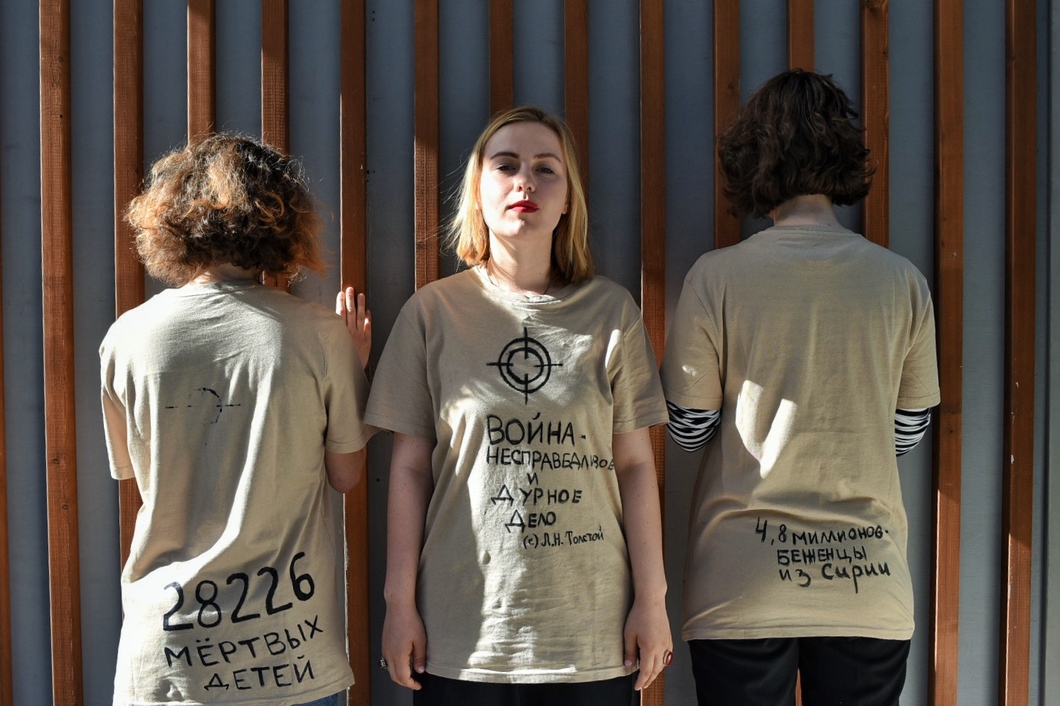 The slogans on the women’s t-shirts read, “28,226 dead children,” “War is an unjust and foolish business © Leo Tolstoy,” “4.8 million refugees from Syria.” Photo by Victoria Odissonovoa. Courtesy of Novaya Gazeta

“We made t-shirts that resemble the t-shirts in Timati’s new collection,” said Corsi, “because war should not be depersonalized. What he is doing is hyping himself using the war. Many people associate Syria only with Islamic State. But it is mostly innocent people who perish from the allegedly pinpoint strikes.”

The activists handed out leaflets entitled, “Say No to War-Based Hype!” They also shouted the slogans “War is not fashionable!” and “War is murder!”

Elisabetta Corsi ran onto the stage towards the emcee. A minute later, she was dragged away. Photo by Victoria Odissonova. Courtesy of Novaya Gazeta

According to our correspondent, around one hundred people came to the launch of Timati’s collaboration with the Defense Ministry. Some took the leaflets and read them attentively, while others handed the pamphlets back or ripped them up.