The prosecutor’s office has estimated that two Petersburg parks sustained 10.9 million rubles [approx. 144,000 euros] in damage during the He’s Not Our Tsar protest, which took place on May 5, 2018, in Petersburg [and other Russian cities]. Two people, Denis Mikhailov and Bogdan Livtin, will be held responsible for all the protesters, police officers, and ordinary Petersburgers who walked on the lawns that day in the vicinity of Palace Square. Law enforcement agencies have identified the two men as organizers of the protest rally. 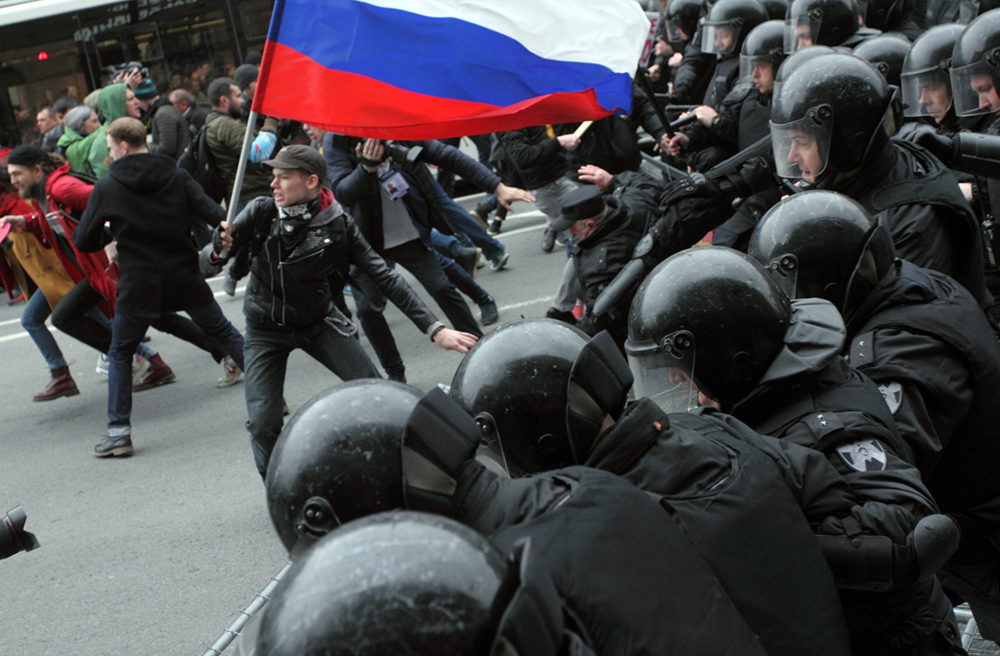 Saving the Grass from Provocateurs
Suing for damage to municipal property is the Russian state’s new know-how when it comes to intimidating the opposition. Like certain other innovations, for example, repeated arrests for involvement in the same protest rally, it is being tried out on Alexei Navalny’s supporters.

The authorities decided to start big. The prosecutor’s office has estimated the city suffered nearly 11 million rubles in damage from the He’s Not Our Tsar rally. According to members of the Navalny Team in Petersburg, the 300-page complaint claims opposition protesters damaged the greenery in the Alexander Garden and the garden next to the Winter Palace. Allegedly, they trampled the lawns, flower beds, and roses, and damaged the dogwood and lilac bushes.

The complaint states the cost of restoring the vegetation in the two green spaces, as provided by the city’s municipal amenities committee. According to the committee, it cost 3,651,000 rubles [approx. 48,000 euros] to repair the damage incurred by the May 5 rally.

The prosecutor’s office multiplied this amount by three, citing a municipal regulation on the amount of compensation to be paid when greenery has to be replaced. The regulation states the amount of damage caused to green spaces protected by the city’s Committee on the Use and Preservation of Landmarks (KGIOP) must be multiplied by a factor of three. 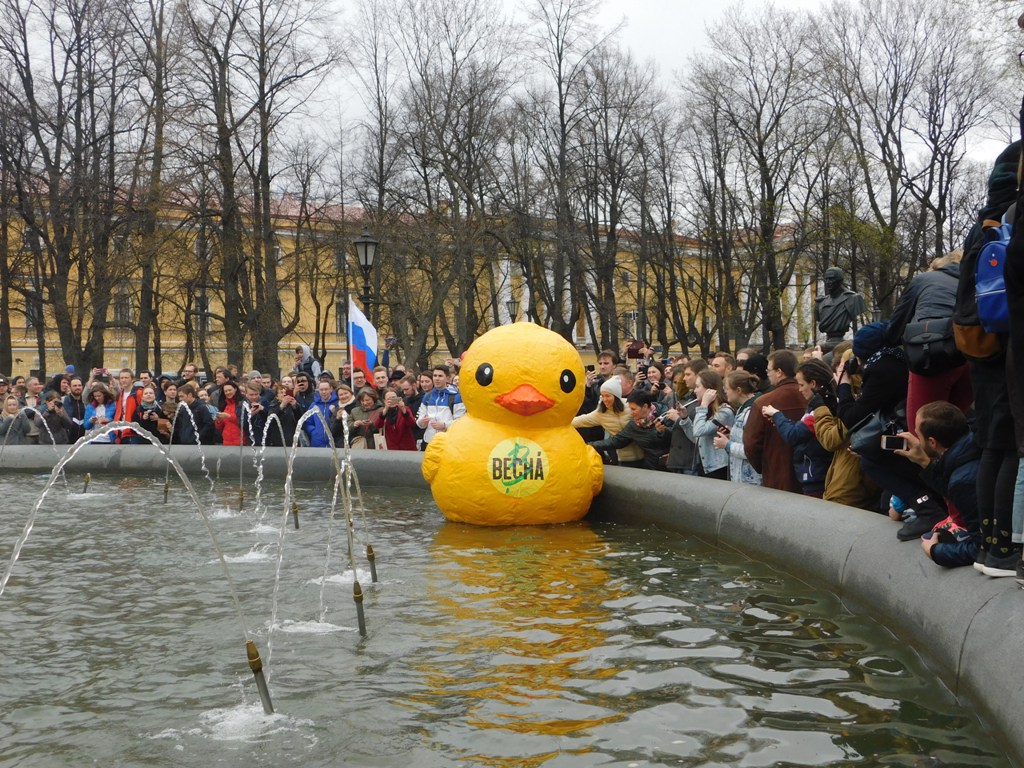 A giant rubber duck emblazoned with the logo of the Vesna (“Spring”) Movement floats in a fountain in the Alexander Garden on May 5, 2018.

Ivan Pavlov, lawyer and head of Team 29, a group of civil rights lawyers, fears the lawsuit against Litvin and Mikhailov is only the first of similar penalties.

“I am concerned by the direction the prosecutor’s office has taken. This would set a very dangerous precedent. Precedents are usually tried out in other regions of the country, but this time they are starting with Petersburg. Fines are one thing, but civil liability is a whole new level of impacting people’s desire to protest,” Pavlov told Zaks.ru.

Leonid Volkov, project manager at the Anti-Corruption Foundation (FBK), argues that if you follow the Petersburg prosecutor’s thinking to its logical conclusion, you could also punish the organizers of authorized rallies.

“If they tell us that the rally organizer should be punished for trampling the law rather than the person who trampled the lawn, it makes no difference whether the rally was authorized or not, right? Let’s imagine we have organized an authorized rally. The prosecutor shows up and tells us organizers he is suing us for a billion rubles. It would sound completely insane,” Volkov said.

Downtown Petersburg is often used as a venue for large-scale events, including official celebrations. For example, this past summer, the Smolny reported that, during the annual Crimson Sails celebration for school leavers, when young Petersburgers and out-of-towners party all night long, approximately 600 cubic meters of rubbish were removed from the downtown area. It is unknown whether the city inspected the condition of its bushes after the school leavers’ party.

The New Governor
Litvin, federal coordinator and press secretary for the Vesna Movement,  actually applied to the Smolny for permission to hold the May 5 rally. He proposed a march down Zagorodny Prospect, following by a rally on Pioneer Square. The city’s law and order committee found a reason to turn down his application, just like the other applications submitted by Navalny supporters. The city told the opposition to hold its rally in Udelny Park, a large green space in the north of the city that looks more like a forest. Insulted by this suggestion, Navalny supporters announced the rally would take place on Palace Square.

Three months later, on August 2, the October District Court fined Litvin 20,000 rubles for organizing the unauthorized He’s Not Our Tsar protest rally per Article 20.2 Part 1 of the Administrative Offense Code. Petersburg City Court subsequently overturned the lower court’s ruling. The case will be reheard in the near future.

Mikhailov, the Navalny Team’s Petersburg coordinator, has already been punished twice for the May protest. First, the Smolny District Court sentenced him to 25 days in jail, and then the October District Court fined him 300,000 rubles [approx. 4,000 euros], a record fine for opposition political activism in Petersburg. The fact that Mikhailov was on the air on the internet channel Navalny Live during the event, answering the questions of his comrades in Moscow, was considered proof he organized the protest.

“I was covering the event, because the major national media were not there. At such a huge event! In Petersburg, 10,000 people marched on the Nevsky,” replied Mikhailov.

He now recalls an interesting conversation he had on the sidelines of one of his court hearings.

“There was a certain law enforcement officer at one of my court hearings. He told me the prosecutor’s office was planning to file suit, because the damages incurred by the city were too large. Nothing came of it. Judging by the complaint, this past summer, they really did carry out inspections and corresponded on the matter, but then it fizzled out. But in November, when Alexander Beglov was appointed acting governor [of Petersburg], the officials involved resumed their correspondence and the lawsuit was drawn up. Putting it simply, Beglov came to power and gave them the green light,” Mikhailov told Zaks.ru.

Maxim Reznik, a member of the St. Petersburg Legislative Assembly, has also noticed the new governor’s shadow looming over the lawsuit. Reznik argues the Smolny is using such cases to intimidate the opposition in the run-up to the 2019 elections.

“They strike us with the lash, and they hit us in our pocketbooks. It’s directly connected with the new governor. Because he is either involved in what is happening or he has no control of the situation. Why he would want that? The regime is showing us its teeth. It doesn’t want there to be any protests whatsoever. [Beglov] needs things to be quiet so he can bring happiness to the city, while anyone who intends to agitate the people should know their place,” said Reznik.

Supernatural Stupidity
Maybe ten thousand people did not attend the May 5 protest, but there were clearly more than two thousand people on the streets, as was claimed by the Interior Ministry’s local office. Originally, no one had planned to march on Nevsky Prospect. Since a celebration for bikers and rehearsals for the May 9 Victory Day military parade were taking place on Palace Square, the protest rally was hastily moved across the street to the Alexander Garden. When the Alexander Garden was teeming with people who wanted to express their displeasure at the policies of the old-new president, Vladimir Putin, voices in the crowd called for the rally to move to the Nevsky, and people spontaneously rushed into the city’s main street.

The Navalny Team did not immediately join the march. Initially, the rally’s Telegram channel broadcast requests not to heed people urging protesters to leave the Alexander Garden. Volunteers sporting “20!8” pins made the same request in person, until they realized there was no holding people back. The crowd stayed on the sidewalk for awhile, but when it encountered a segment of the Nevsky closed to traffic for repairs, it went onto the roadway. At approximately the same time, Mikhailov, who was in the midst of the crowd, went on the air on Navalny Live.

The first arrests occurred at the corner of Marat Street and Nevsky, where a police barrier awaited the demonstrators. Seeing what happened, the bulk of the crowd turned around and headed in the opposite direction, walking down the Nevsky and parallel streets. In none of the court hearings in the cases of Litvin and Mikhailov was any evidence presented that suggested either of the men had encouraged the demonstrators to return to Palace Square.

Most of the arrests took place outside the Hermitage. Police dressed in riot gear gave chase over the lawns to anyone chanting slogans. They caught some of these people, dragging or escorting them to paddy wagons parked on Palace Passage. The proceedings were videotaped and photographed by bloggers and reporters. No one had the time to look where they were walking.

Two men, however, will be held liable for damaging the lawns and other vegetation. One of them, Litvin, never even made it back to the Winter Garden: he was detained near Gostiny Dvor when the demonstrators headed in the opposite direction.

“The lawsuit makes no sense whatsoever. The Russian Civil Code prohibits seeking monetary compensation for damage from persons who did not cause the damage. The law requires the individual who caused the damage to be identified. This lawsuit is a PR stunt on the part of Governor Beglov meant to intimidate the opposition. It is a stupidity supernatural in its scope,” argued Chaplygin.

The Frunze District Court will try and make sense of the botany of the city’s parks and the prosecutor’s arithmetic after the New Year’s holidays. A preliminary hearing in the case has been scheduled for January 10.

Photos courtesy of Zaks.ru. Translated by the Russian Reader