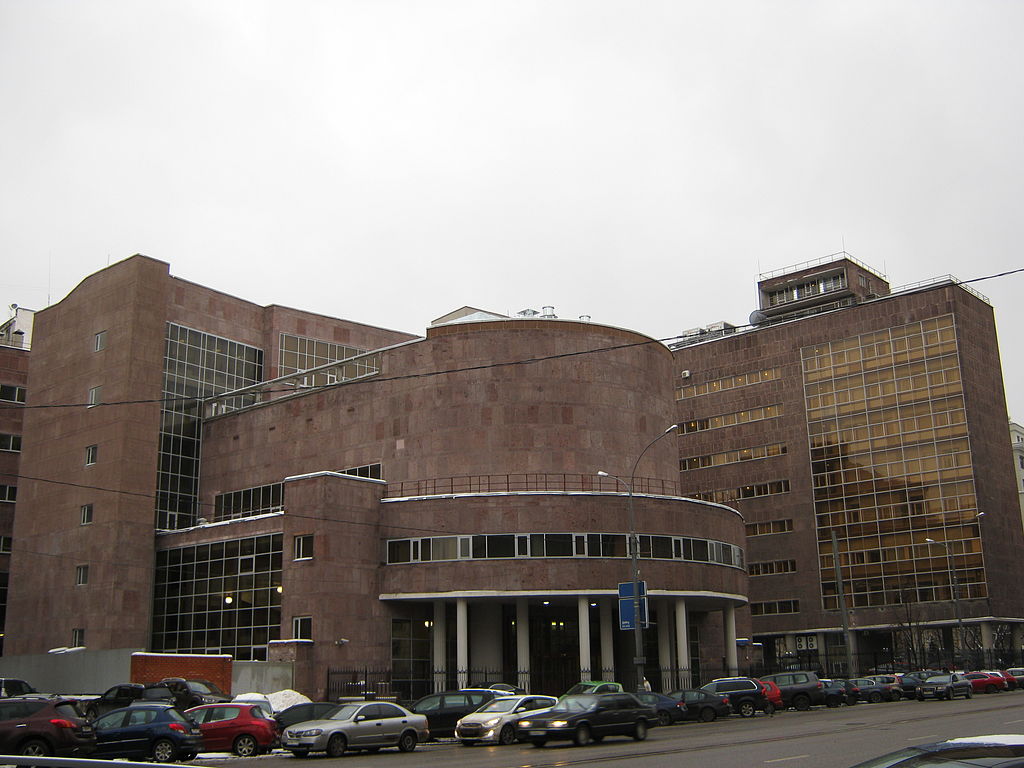 The Tsentrosoyuz Building, on Sakharov Avenue in Moscow, was designed in 1933 by Le Corbusier and Nikolai Kolli. Originally built as headquarters of the Central Union of Consumer Cooperatives, it now houses Rosstat and the Russian Federal Financial Monitoring Service. Photo courtesy of Wikipedia

“The worst thing you can do is mess around with statistics. […] When we lose sight of our system of coordinates, we wander in the dark, and anything we say is fraught with delusions,” said German Gref when sizing up the resubordination of Rosstat (Russian Federal State Statistics Service) to the Economic Development and Trade Ministry in 2007 during Gref’s tenure as minister.

Rosstat has several times been reassigned from the Russian government’s oversight to the Economic Development Ministry, and back again. The last time Rosstat came under the ministry’s wing was spring 2017. Economists also predicted at the time Rosstat would have to produce statistics showing he authorities in a good light.

On Monday, Rosstat reported on the populace’s real incomes in January 2018. For the first time in a long time, they did not decline in annual terms, nor did they increase, according to the agency’s estimate. But a fall in incomes was prevented only due to the fact that Rosstat did not take into account income a segment of the populace had earned a year ago: a one-time payment to pensioners of ₽5,000. At the time, it allowed the agency immediately to record a growth in incomes of 8.8%. This was the only month in 2017 when such growth was recorded. If this payment is not included in calculations, incomes grew only by 1.3% a year ago, Rosstat said on Monday. Rosstat took this payment into account all last year and did not reconsider its results: a decline in incomes by 1.7%. The data had been corrected for the sake of its comparability, the agency explained.

This is “frank manipulation,” claims Kirill Tremasov, director of the analytics department at Locko Invest. According to his own computations, incomes actually fell by 7% last month, but in the run-up to the March presidential election there is no stomach, apparently, for publishing figures about this decrease in incomes. Rosstat should publish real data, possibly furnishing them with adjusted calculations. Or the figures for all of 2017 should be revised, in which case incomes would be shown to have fallen by 2.1–2.2%, not by 1.7%, argues Tremasov.

Real Incomes of the Russian Populace in Terms of Percentages Relative to the Previous Year. The seven-percent drop in January 2018 is based on Kirill Tremasov’s estimate (see above). Source: Rosstat. Courtesy of Vedomosti

The statistics would have then deviated even more from the forecast of the Economic Development Ministry, which had anticipated a 1.3% uptick in incomes in 2017. Rosstat’s figure mislead the public, Tremasov concludes.

The way Rosstat treated the indicator was wrong, says Vladimir Bessonov, head of the Laboratory for Research in Inflation and Growth at the Higher School of Economics. He is certain that if the one-time payment to pensioners was taken into account in January 2017, it must also be taken into account now. Although it is unlikely Rosstat cheated on purpose, he argues, because hat would pose much too serious reputational risks to the agency.

This approach changes the picture of trends, say Igor Polyakov of the Center for Macroeconomic Analysis and Short-Term Forecasting (CMASF). Both the one-time payment and seasonal phenomena should not be factored into calculations for the whole of 2017. Compared to December 2017, incomes increased by 1.5% in January 2018, he claims, but public sector wages were indexed by 4%at the beginning of the year, and the pensions of unemployed pensioners by 3.7%. To get a real take on incomes, we should wait for February’s figures, which will be free of temporary factors, argues Polyakov.

In 2018, incomes will continue their downward trend, argues Vladimir Tikhomirov, chief economist at BCS Financial Group. According to its own forecast, however, the Economic Development Ministry anticipates a 2.3% growth in real incomes.

“Monthly data on people’s incomes are unrepresentative anyway. The reliability of the primary data used in the methodology is not perfect, to put it mildly, sometimes to the point of directly contradicting reality,” a federal official says in response to Rosstat’s report.

Bessonov confirms there are, indeed, many bones to pick with the performance figures for the populace’s real income, and problems with the methology for estimating them.

The indicator has not been terribly representative since 2014, argues Natalya Orlova, chief economist at Alfa Bank. We need it, among other things, to estimate the performance of the informal sector, where wages are counted as income. However, whereas miscellaneous income had grown by 25% in 2015, it fell by 7% in nominal terms in 2016. But even if the indicator is not representative, says Orlova, this does not mean it can be treated the way Rosstat has treated it.

A spokesperson for the Economic Development Ministry did not respond to our request to comment on this article, while Rosstat refused to comment.

Previous posts on the same subject: