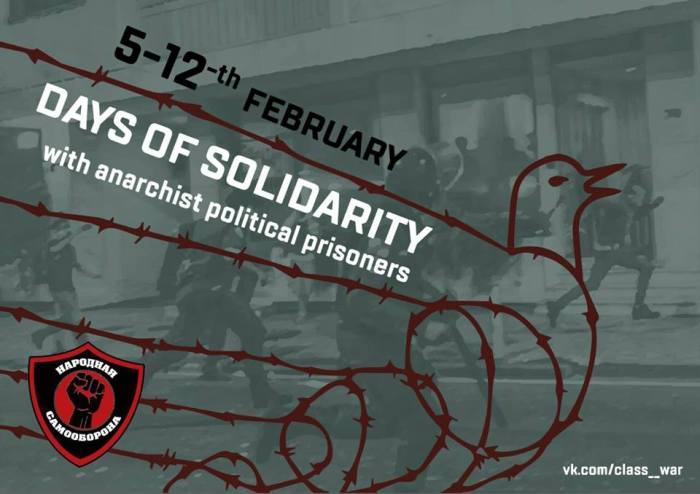 Metropolitan Anarchist Coordinating Council – MACC
As part of the week of solidarity with Russian anarchist political prisoners there will be a demo at the Russian Consulate, 91st Street, today, February 7, 2:30 PM–4:00 PM.

More information on the recent arrest and torture of anarchist and antifascist political prisoners here:

Six anarchists have been arrested in Penza, Saint Petersburg, and Crimea, from October 2017 to February 2018, by officers of the Russian Federal Security Service (FSB) on charges of involvement in a terrorist group. During this period, there have been raids on the homes of anarchists and antifascist all over Russia. The arrested anarchists have been tortured into falsely confessing their involvement in the imaginary network. This is clearly a state-fabricated conspiracy being used to eradicate the anarchist movement.

As the support team says, “These repressions can only intimidate people and crush the anarchist movement. In this case it’s necessary to show that we are not afraid and we can’t be destroyed by their force. Otherwise, the repressions will be used every time when the anarchist movement attracts the notice of the FSB. We must show them that the stronger their crackdowns are, the more furious our resistance is.”

We are hosting a movie and information session about the broader anarchist and antifascist movement in Russia, and talking in more detail about this particular case.

About the movie
Antifascist Attitude is the first-ever documentary film on the emerging Russian antifascist movement made by activists themselves. The movie features moderate NGO activists and radical grassroots activists and anarchists from three cities: Moscow, St. Petersburg, and Irkutsk. It also features the antifascist lawyer Stanislav Markelov, murdered by neo-Nazis in Moscow on January 19, 2009.

Come and learn about what’s happening and ways to support our comrades in Russia!

Join the General Defense Committee for a dinner, discussion, and letter writing to support antifascists targeted by the FSB crackdowns in Penza and St Petersburg.

The far right rises in the US, in Russia, and across the world, attacking oppressed peoples, immigrants, and working class revolutionaries. Antifascists are fighting against nationalist hate across borders, and facing attacks from the ruling class’s governments. In Russia, the FSB (Federal Security Service) are hard at work arresting, torturing, and framing antifascist activists in Penza, St. Petersburg, and elsewhere.

The Anarchist Black Cross in Moscow and St. Petersburg has asked for international solidarity with the Russian anarchists facing repression. We will be holding a dinner in the IWW offices at 2101 Hennepin Avenue South, Suite 101, Minneapolis, on Saturday, February 17, 2018, from 5:30 p.m. to 8:00 p.m.

We’ll discuss the situation in Russia as well as the repression faced by anarchists in Belarus, Ukraine, and other countries. We’ll collect donations, provide a space for letter writing to the defendants, and facilitate discussion on further international solidarity work with political prisoners, labor organizers, and anti-authoritarians.