You Have the Oyat at Your Back, Young Arseny
Viktor Smirnov
47news
November 23, 2015

Arseny, a third-grader from the Podporozhye District, crosses a river in a boat on his way to school. On the weekends, he serves as an altar boy at a church. His father abandoned Arseny and his mother, a real estate agent conned them, but the authorities know the score. At school, he got two zeroes for conduct when he had no pencils or shoes on September 1, the first day of school. 47news journeyed to the backwoods of the Leningrad Region and spent a day with Arseny’s family.

Every weekday at 7:40 a.m., 9-year-old Arseny Prokhorov and his mom Irina Prokhorova ford the Oyat River in a rubber boat. They are hurrying to school.

The Oyat River, which has its source in the Vologda Region, is 266 kilometers long and flows into the Svir River. It has a strong current and contains rapids. Its course has not changed for at least a thousand years.

“It is especially frightening in the mid season, when the ice sets and the current pulls along whole sheets of it. We make a point of carrying the boat higher upstream. And in the spring, the current carries the slush produced by the ice, and the water rises a lot,” Irina Prokhorova told me.

Last spring, she was crossing the river alone when the boat capsized and she fell into the water. But she swam ashore pulling the boat out with her. Arseny stood on his side of the river and cried.

Believe me, he is quite grown up. Incidentally, the only two zero marks for conduct he has had this year were on September 1 and September 2. He had no notebooks, pencils or shoes. Children’s protective services came after that and inspected the house, but nothing has been heard on this shore from social services since then.

The boy and his mother have lived in the village of Gribanovskaya in the Vinnitsy Rural Settlement of Podporozhye District for four years. The village is situated on the right bank, but seven houses have stood on the left bank for a long time. No one lives in six of them during the winter: they belong to summertime cottagers.

The school bus picks Arseny up at 7:50 a.m. The school itself is four kilometers away, in the village of Vinnitsy. On the weekends, the only way to get there from Gribanovskaya is on foot. Irina uses an old bike to get there or she and Arseny walk there together. The commuter bus runs three times a week: Mondays, Wednesdays, and Fridays.

After our phone call, the mistress dashes out of the house, climbs down a steep bluff, unties the boat, and drags it to the water. Plying the oars in a masculine fashion, she sails towards us.

A petite woman jumps nimbly from the craft. She is dressed neatly, but is nervous. We clamber aboard the boat. The first to go aboard is Father Vladimir, rector of the local church. He helps the family any way he can. I, the correspondent from afar, get on the boat second. We have to step from the sloping ice into the boat’s soft bottom. The black water, the tiny oars, and the air temperature do not inspire me with optimism. I begin to doubt whether the boat will bear our weight. The priest is not having such a smooth time of it on the oars. We begin to drift.

The backyard is depressing. Irina gets right down to business. They will soon run out of firewood. Father Vladimir frowns. 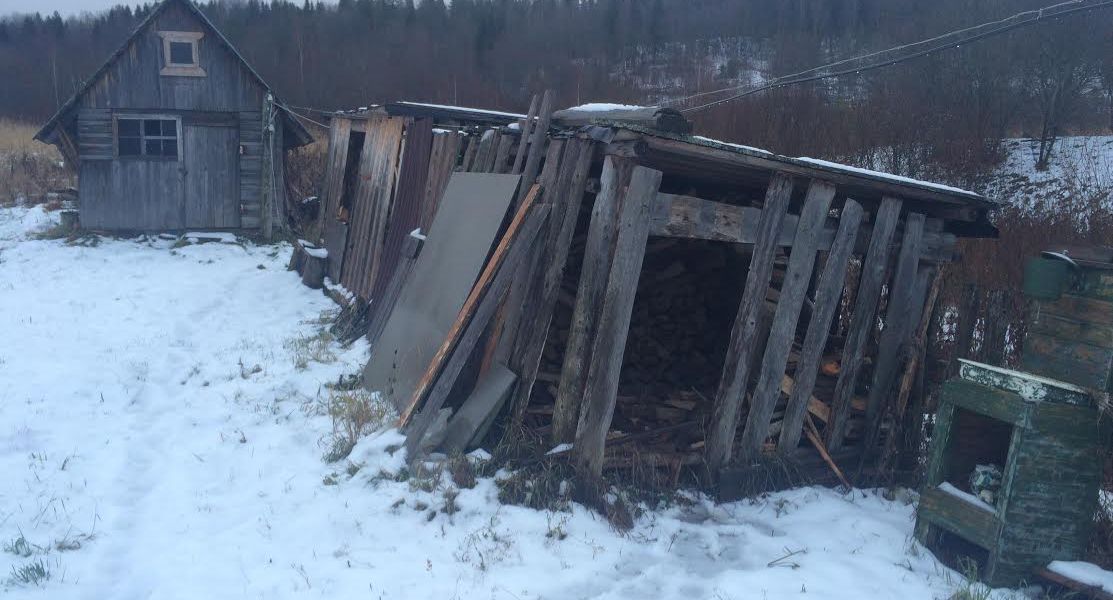 I am given a brief, simple tour of the local way of life. Irina and Arseny once had rabbits and a couple of pigs. They slaughtered them out of necessity. The garden and the potatoes they grow there are their salvation.

Arseny’s diet is as basic as that of a postwar child: oatmeal in the morning, soup for lunch, and buckwheat kasha or macaroni for supper. The family lives on 2,500 rubles a month [approx. 35 euros], which Arseny’s grandmother sends them. Irina’s oldest daughter from her first marriage helps them out by sending produce.

“Once every two weeks we sail to the mobile shop,” says Irina.

She would be glad to work, but jobs are nowhere to be found, neither in Vinnitsy nor, especially, in Gribanovskaya.

Irina is from Petersburg. She has two daughters from her first marriage, aged 17 and 27. She and her new husband moved to Vinnitsy. They had decided to get away from the noise of the city. Arseny was born there. In 2012, their house burned down. Since Irina was officially registered as a resident of Petersburg, she was refused assistance by the local authorities. With this incident in the back of her mind, she does not ask the authorities for anything nowadays. She had to sell her share in an apartment in Petersburg and buy the house in Gribanovskaya. Moreover, the real estate agent, who showed them the house in winter, did not mention there was no bridge or ferry. Nor did Irina ask. Then her husband hit the bottle and left the family. In parting, he gave Arseny a lifejacket.

We go into the house. Only of one of the three floors is inhabited. It contains a kitchen with a brick oven and a double room. It is warm and cozy inside, not at all like it is outside. Arseny comes out. He shows us his desk, books, and drawings. He gets Bs and As at school, although he recently got a D in shop. He did not bring glue and cardboard to class. His mother did not have the money to buy them. On the other hand, he is a champion at reading contests.

Arseny takes weekly lessons with a painting teacher in Vinnitsy. Once again, Father Vladimir has helped him out with this. Arseny says his dream is to be an artist and see the Coliseum and the Louvre one day.

The family has a plan to this end: to finish the first four grades and enroll in the Russian Academy of Art’s Ioganson State Academic Art Lyceum in Saint Petersburg.

Arseny’s hobbies included books and chess, which he has played since the age of six. He also likes the SpongeBob SquarePants cartoons.

When asked whether he knows who Bobby Fischer was, he confidently replies, “I saw a book about him, but I haven’t read it yet.”

Right at this moment, a film about the life of the brilliant American chess player is showing in Petersburg theaters. I doubt that most young people would have responded to my question as Arseny has.

There is a computer in the house with Internet access. Although his mom does not encourage it, Arseny has his own page on the VKontakte social network and is interested in the news. Among the latest news, he remembers the crash of the Malaysian Boeing the most. Arseny has the sense the world is ruled by God, and that Vladimir Putin reigns on earth. True, at first the lad misspoke himself, calling the president “Alexander.” He also knows about important people “somewhere out there.” But the ticks and vipers in the backyard are more real to him. He makes no bones about the fact he is afraid of them.

A tick bit him this past spring. It turned out to be carrying encephalitis. The doctors kept Arseny in hospital five days and then sent him back home with his mother. Since then, Arseny has periodically had a temperature.

This is bad, because earlier the boy had suffered from barely noticeable disabilities that had almost disappeared through the efforts of his mom. The boy has been exempted from attending physical education classes. Which is just as well, since every day he does chores at home like an athlete. Now Irina worries whether the encephalitis will affect his nervous system.

“The school requires a written waiver exempting Arseny from transfer to boarding school. But how can I give him up?” wonders Irina.

Father Vladimir supports her. He booms that it would be wrong to send the boy from his child’s bed, with his mom nearby, to a state-sponsored cot.

And There is a Church Nearby

We get ready to go to the local church. Arseny serves there as an altar boy, helping with the mass. As we get ready to go, it transpires that the most burning question will soon be the question of winter boots. Arseny simply does not have any. The boots donated to him two years ago have fallen apart. Despite their problems, mother and son look neat and self-possessed. We have to cross the river again.

We take Father Vladimir’s Zhiguli to Our Lady of Smolensk Church in Vinnitsy. We go into the church, which smells of oven, wood, and incense. There is a stand-up piano in the corner. After the icy snow, drizzle, and darkness, I immediately feel sleepy. Arseny assists the priest for two hours.

It is getting on towards nine in the evening. There is neither a single soul nor a single car on the streets of Vinnitsy and, especially, Gribanovskaya. We have returned to the ford. The road was utterly muddy, and snow mixed with rain is coming down. In the darkness, descending the steep bank to the boat is completely unpleasant. We bid farewell to the squeaking oars. We cannot see the boat all. Just in case, we say goodbye again. We hear a reply. It is like a film about the war, as if they are going off on a recon mission.

I finished my work in Gribanovskaya around nine in the evening. Father Vladimir gave me a lift to Vinnitsy and set off to administer extreme unction to a local woman. In her youth she is said to have practiced witchcraft.

There was no sign of cars on the street, so my logistics hit a dead end. The local police saved the day. A call to Podporozhye District Deputy Police Chief Dmitry Vladimirov asking to facilitate my not kicking the bucket was understood loud and clear. His guys saved the day. Police officer Andrei (who, incidentally, was supposed to be finishing his shift) drove me 75 kilometers through a blizzard and over potholes to Podporozhye. Along the way, his wife called, worried.

Suddenly, in a place where the thicket had almost overgrown the road, a healthy white wolf with gray markings crossed the road in front of us. The beast stopped, flashed its eyes, and vanished. Perhaps it was surprised to see people at such a time in such a place.

P.S.  Of course we talked with Arseny and his mother. You can soon read about Arseny’s dream on 47news. In the meantime, think about this article.

Translated by the Russian Reader. Videos and photos courtesy of 47news