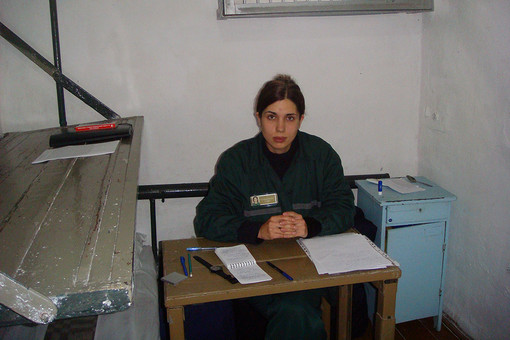 Members of the Presidential Human Rights Council who visited Women’s Penal Colony No. 14 in Mordovia have confirmed the claims made by Nadezhda Tolokonnikova in her complaint. According to the human rights advocates, many of the inmates are intimidated and afraid. The penal colony administration said the increase in the length of the workday had resulted from obligations to their business partners: they had a large order for police uniforms. Meanwhile, Gazeta.Ru has obtained access to video evidence and testimony from relatives regarding a hunger strike at a neighboring men’s penal colony where inmates are afraid for their lives.

After visiting Penal Colony No. 14 in Mordovia, Ilya Shablinsky, a member of the Presidential Human Rights Council (HRC) and professor of constitutional and municipal law in the Law Faculty at the Higher School of Economics, has confirmed Pussy Riot member Nadezhda Tolokonnikova’s claims regarding human rights violations at the prison. According to the fifty-one-year-old professor, whose mother was born in practically the same camp in 1939, he tried to interview as many inmates as he could before talking to Tolokonnikova herself. He managed to have in-depth conversations with eight other prisoners. Shablinsky said their stories made “[his] hair stand on end.”

“The prison administration, it has to be said, let me speak with inmates face-to-face in the office of the penal colony’s deputy chief warden. But that’s not all: most of the women froze up in response to my questions and refused to speak.”

“One of the women, whose nose was bashed to one side like a boxer’s, simply burst into tears after one of my questions about the length of the workday,” Shablinsky said.

“After that, I met with a few courageous women, whose names should be known: Natalia Karatina, Ulyana Balashova, and Ksenia Ivashchenko. Their lives and well-being are currently in danger,” Shablinsky said. “They decided to submit detailed evidence in written form, confirming all of the facts described in Tolokonnikova’s letter.”

According to the evidence collected by HRC members at the penal colony, the eight-hour workday is definitely exceeded due to required production quotas. The administration claims that inmates volunteer to work overtime in order to make these quotas, sometimes staying until one in the morning. The inmates themselves say it is their shop floor managers who require them to work late and on weekends. As penal colony warden Alexander Kulagin explained, two Sundays per month are usually designated workdays, with three such days at the end of the quarter.

“The administration has a purely economic interest, there’s no sadism involved. We’re only fulfilling contractual obligations to our partners. It’s nothing personal, just business.”

According to the warden, the inmates are also interested in earning money.

“It was some textile institute in Ivanovo that came up with the production quota of 150 police uniforms per shift,” Shablinsky said.

“This is for backbreaking work and includes all of their overtime pay,” Shablinsky said.

Another problem, according to Shablinsky, is the casual violence women face from fellow inmates. Punishment in the form of being forbidden to enter the barracks until lights out, implemented year round, led to one of the inmates getting such severe frostbite on her hands and feet that they had to be amputated.

“I found this woman. She was afraid and dejected, but she wanted me to photograph her,” the professor said.

The story of a Gypsy woman being beaten to death in one of the dorm units where corporal punishment is employed, described by Tolokonnikova in her open letter, was also confirmed by her fellow inmates, human rights advocates said. The official cause of the thirty-year-old woman’s death was a stroke.

“The women who, according to other inmates, use force on fellow prisoners really do look dangerous, like men. I personally confronted one of their presumed victims. She refused to say anything and covered her face with her hands, but there was a yellow stripe on her badge indicating a suicide attempt. You have to see this with your own eyes,” Shablinsky said.

“I am grateful to the women who had the courage to come forward. These are desperate, exhausted women. Twenty-eight-year-old Natalia Karatina spent several months in solitary,” Shablinsky said.

“You can still see traces of her feminine beauty and dignity, but she has gone all gray. She’s most afraid of losing her teeth. One has already been knocked out. And she is supposed to get out in November.”

HRC member Maria Kannabikh was more subdued in her assessment of the situation at the penal colony. In an interview with RIA Novosti, she said she had met with Tolokonnikova, who “looked fine,” and whose cell was warm.

“I met with women who work with Tolokonnikova, and they assured me there were no conflicts and that Tolokonnikova is a normal person,” said the Public Chamber member.

Kannabikh verified that the inmates actually do work eleven- or twelve-hour shifts periodically.

“The women I spoke with told me this happened from time to time when there was a rush order,” the Public Chamber member explained.

Meanwhile, rights advocates and relatives of inmates at neighboring Men’s Penal Colony No. 12 (PC-12) said that nearly thirty inmates at that facility have gone on hunger strike fearing for their lives following threats from the prison administration. Gulagu.net project coordinator Mikhail Senkevich notified Gazeta.Ru of this.

“There are even more people there who have been on hunger strike for several days now. Official complaints have been filed. No one is responding to them,” Senkevich said.

Valentina Savinova, an acquaintance of a PC-12 inmate, reported the same thing. She provided Gazeta.Ru with a video appeal from the inmates, as well as a secret audio recording of a conversation with inmate Yuri Zhernovykh, where the latter explains that he is unable to continue paying the prison administration the money they extort from prisoners. According to Savinova, similar evidence and complaints have been sent to the Investigative Committee and Prosecutor’s Office.

A source released from PC-12 several months ago who wished to remain anonymous for his own safety told Gazeta.Ru there was a longstanding practice at the institution of beating and threatening inmates who had fallen afoul of the administration. Last September, Mordovia Federal Penitentiary Service personnel beat several inmates during a search. One of them, Alexei Kaknayev, documented his injuries and wrote a statement to investigating authorities. The same day, after lights out, he was summoned to the penal colony’s headquarters. The young man was later found hanged in the clothes storage room in his dorm unit.

“Most likely, they had threatened to rape him,” the informant speculated.

The press service of the Mordovian Federal Penitentiary Service was unavailable for comment throughout the day.

Originally published on the web site of The Voice Project. The Voice Project’s Pussy Riot Support Fund is used to keep Nadya and Masha clothed, supplied, visited and monitored in the labor camps (this is critical for their ongoing safety), and for their legal expenses and children’s care. For more information or to donate: voiceproject.org/pussyriot