The Shulgin Tenement House, named after its proprietor, is situated at the corner of Tavricheskaya Street and Tavrichesky Alley. The house was built in 1914, designed by architects Vladimir Upatchev and Mikhail von Wilken in the neoclassicist Art Nouveau style, then popular in Petersburg.

We know that, during the Great Terror, twelve residents of the house were shot on trumped-up charges. Among them was Nikolai Ignatyevich Yushkevich, who lived in the house with his wife and two sons.

Yushkevich was born in 1900 in Vilna Province. He had a primary education. He joined the Party in 1924.

As his wife Maria recalled, “My husband finished four grades of school in 1914 and, since he cane from a family of poor peasants, he had to quit school and work on the farm. In 1917, he left for the city to earn money.” 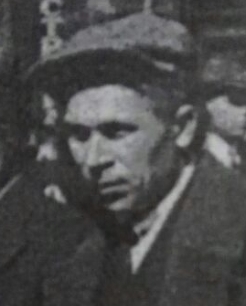 From May 1917 till his arrest, Yushevich worked at the Main Waterworks Station (Vodokanal) in Petrograd-Leningrad, where he served as an unskilled laborer, a woodcutter, and then a coalman, machinist, and electrician. His last post was head of the supply department. Acccording to a record in the Vodokanal Archives, Yushkevich was “dismissed due to his arrest.”

The arrest took place on October 23, 1937. On November 3, the Vodokanal employee was sentenced to death.

According to the indictment, Yushkevich “was a member of a counterrevolutionary espionage and sabotage organization, into which he had been recruited by Polish intelligence agent V.S. Tomashevich, who had tasked him with collecting intelligence and planning acts of sabotage.”

The NKVD investigators likewise noted that “the espionage information had to do with the structure and location of the city’s water main, and supplies and storage sites of poisonous substances.”

That was not enough for the NKVD officers, however, so they dreamed up the notion that Yushkevich had, supposedly, “accepted the assignment of carrying out acts of sabotage by poisoning the water supplied to the populace during wartime.”

The death sentence was carried out on November 10, 1937. Yushkevich was thirty-seven. He was survived by his wife, Maria, and two sons, six-year-old Boris and two-year-old Vladimir.

In 1942, the Yushkevich family was administratively exiled from Leningrad.

“The authorities insisted on evacuating us, but I refused,” Maria later recalled. “Mother was seriously ill and could not be moved. But the NKVD investigator forced me, since my husband had been arrested. On March 31, 1942, the children and I were forced to leave Leningrad. Mom died two days later. Our group of Leningraders arrived in the Vyselki District of Krasnodar Territory. The family was sent to the Dzerzhinsky Collective Farm. […] In 1945, I returned to my hometown on a summons issued by the Leningrad City Council of Workers’ Deputies, but I was refused a residence permit, since my husband was under arrest. […] I did not want the children to face incidents of mistrust in their lives and work due to their father’s arrest. Since I did not believe my husband was guilty, I kept everything from the children. However, there were incidents. My eldest son was expelled from vocational college […] and refused admission to university.”

The room where the family had lived before their exile from Leningrad in 1942 had been occupied by a secret police officer.

Maria Yushkevich regularly wrote letters and complaints to various authorities in her attempt to find out what had happened to her arrested husband.

The family archives contains a document from the Leningrad City Prosecutor’s Office about a review of the case in 1940. The family received the notification only in 1957, when the decision to fully exonerate Yushkevich had been made.

The decision in the 1940 review contains the following passage: “The verdict against N.I. Yushkevich should be considered correct. […] His activities as a spy and saboteur were wholly corroborated by his personal confession.”

Before Yushkevich was exonerated in 1957, the authorities replied to his family’s inquiries in various ways. Maria later recalled one such reply.

“‘The case is not subject to review, since N.I. Yushkevich is an enemy of the people, convicted by a special collegium under Article 58 and sentenced to ten years [in a prison camp] without the right to correspondence.’ [They wrote] that my husband would never come back and insisted I remarry. In 1940, I received a reply claiming my husband was alive and well, and that he was in the northern camps without the right to correspondence. […] In 1955, after I sent an inquiry about my husband’s plight to the head of the Gulag at the Interior Ministry, I was informed my husband had gone missing in action during the war.”

As the Military Tribunal of the Belorussian Military District determined when reviewing the case in 1956–1957, “The charge was not based on objectively corroborated testimony. The baselessness of the charge against Yushkevich was established during an supplementary review of the case. Yushkevich was not involved in the case of Tomashevich, who had allegedly recruited the former. There is no compromising information about Yushkevich in the relevant archival agencies. Former NKVD officers Altwarg and Perelmutter, involved in investigating the case, were convicted of falsifying cases under investigation.”

Thanks to Dmitri Evmenov and Jenya Kulakova for the heads-up. Photo and translation by the Russian Reader