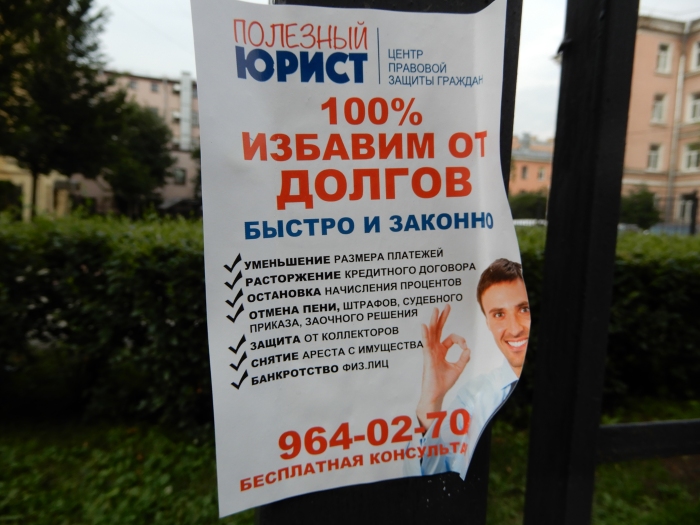 The “handy lawyer” at a place calling itself the Civil Legal Defense Center promises to relieve people “of their debts 100% quickly and legally.” Photo taken in central Petersburg on 22 July 2018 by the Russian Reader

The Economic Development Ministry has reported individual consumer loans have been growing faster than wages and savings. In June, they grew by 15.9% in annual terms after a 15.1% uptick in May. If the season were not taken into account, this would amount to an increase of over 20%. However, real wage growth during the same period slowed to 7.2%, while the growth rate of savings deposits fell 7.1%. (The figures for May were 7.6% and 7.7%, respectively.)

The entire portfolio of loans to the general public increased by ₽1.1 trillion to ₽13.3 trillion [approx. €181 billion] during the first six months of 2018, according to figures from the Central Bank. Sberbank alone lent a record-breaking ₽714 million [approx. €9.7 million] in consumer loans during this period, which was 74% more than a year ago, while VTB Bank supplied the general public with ₽400 million in loans or 32% more than over the same period in 2017.

The public’s demand for consumer loans has grown. Inflation is relatively low in the wake of 2014, the Central Bank’s key rate has stabilized at a low level, and wage growth has picked up, explains Sergei Shirokov, managing director of Sberbank’s Borrow and Save Division.  Since the start of the year, VTB has twice improved the terms of its loan programs and increased the issuance of loans by 17%, notes Dmitry Polyakov, a vice-president at the bank.

Companies, on the contrary, have increasingly gone on a savings binge, writes the Economic Development Ministry. In June, they increased their bank deposits by 8.3% in annual terms. (The increase in May was 6.5%.) Their outstanding loans have also grown, but only by 2.8%, compared to the same period in 2017, or by 3.3% when corporate bonds are taken into account. (In May, the same figures grew by 2.6% and 3.1%, respectively.)

Banks have focused on lending to the public. Under current regulations, they find this more profitable than lending to businesses, complained Economic Development Minister Maxim Oreshkin. This circumstance worried his ministry, he said. He suggested the Central Bank should make it more profitable for banks to loan to companies as opposed to making consumer loans. The ministry did not respond when we asked whether Minister Oreshkin, as a member of Sberbank’s advisory board, had voiced his concern about the high rate of consumer loans issued by Sberbank.

Retail lending has actually been recovering faster than corporate lending, partly because the public vigorously decreased their debts to banks in 2015–2016, whereas now, as wages have increased and rates have hit bottom, they have again accumulated debts, says Natalya Orlova, chief economist at Alfa Bank. Banks are also more interested in lending to individual due to western sanctions against Russian companies, she continues. If a company is at risk of western sanctions, it might also have trouble paying back its loans. Unlike mortgages, however, the growth of consumer loans has almost been exhausted. Outstanding loans have nearly reached 10% of GDP, the maximum for Eastern Europe, warns Orlova.

Consumer lending started to recover last year amid falling personal incomes. People were able to increase consumption only by taking out retail loans, analysts at RANEPA noted. In early 2018, on the eve of the presidential election, the salaries of state-sector employees increased dramatically. The government had to make good on President Putin’s May 2012 decrees and bring the salaries of teachers, doctors, and researchers to 100–200% of average regional wages. On the heels of the wage increases, personal incomes rose by 4,2–5,6% in annual terms from February to April. In May and June, however, real personal incomes of Russians returned to a near-zero growth rate. This sparked an increase—from 12% in May to 22% in June—in the percentage of Russians who anticipated that their family’s financial circumstances would worsen over the next year. The percentage of people who excepted their fortunes to change for the better shrunk from 24% to 19%, according to a poll conducted by inFOM.

The Central Bank has already been reducing the profitability of consumer loans for banks. The risk ratio for unsecured consumer loans was increased on May 1, and the regulator plans to raise it again on September 1 for loans whose total cost exceeds 10% per annum. The Central Bank has been also been reviewing other proposals for stabilizing the growth of consumer loans, said Vasily Pozdyshev, the Central Bank’s deputy chair, as quoted by RIA Novosti. For example, increased oversight requirements could be applied to banks whose consumer loan portfolios increased much more quickly than the market average, or the growth of such loans could be restricted, said Pozdyshev. According to him, the banks had made an interesting propose to introduce differentiated risk ratios for consumer loans depending on their amount: large loans in amounts greater than ₽300,000 [approx. €4,000] would bear the greatest risk ratio. In addition, as of 2019, banks should start regularly calculating the PTI (payment to income) ratio as a means of determining a customer’s credit worthiness, although the Central Bank would not use it as a regulatory instrument befored 2020, added Pozdyshev.

High-risk borrowers are more likely to seek loans from microfinance institutions (MFIs). According to the National Credit History Bureau, MFIs issued ₽26.3 billion [approx. €358 million] in so-called payday loans from April to June, which was 23.8% more than last year. Vulnerable segments of the populace are already seriously indebted, says Georgy Okromchedlishvili, principal analyst at ITS Wealth Management, and significant growth in these loans is not anticipated in the future, but nor is a noticeable decline expected. Stable economic growth has to be in place for that to happen, he argues.

Reliable Future Consumer Credit Cooperative is one of many retail lenders ready to help ordinary Russians “boost their standard of living.” Photo by the Russian Reader

Household Debt of Russians Exceeds Twelve Trillion Rubles
Half of This Amount Was Borrowed Over the Last Year
Emma Terchenko
Vedomosti
January 31, 2018

This emerges from statistics gathered by the United Credit Bureau (OKB), based on information about the outstanding loans of 82 million Russians.

The OKB’s calculations show the number of new loans grew more slowly than their total amount. Over the past year, loans increased by 37% compared to 2016 (by 4.14 trillion rubles), whereas their quantity increased only by 12% to 34.8 million individual outstanding loans.

Moreover, an increase was observed in all segments of the loan market—mortgages, cash loans, auto loans, and credit cards—according to the OKB’s statistics.

Banks mostly disbursed money to Russians in the form of cash loans: nearly 3 trillion rubles or 33% more than in 2016. The number of such loans reached 24.7 million units, an increase of 14%.

The total amount of mortgages issued for the year increased by 42% to 1.8 trillion rubles, while the total number rose by nearly a third to 959,237 individual mortgages. According to Rusipoteka, a financial analytics company, 53% of the housing mortages issued last year were supplied by Sberbank.

“Afer the crisis, banks tried to build up their mortgage portfolios. Many of them reduced their down payments to accomplish this. Therefore, amongst the loans issued last year, around a third had down payments of less than 20%,” says Rusipoteka director Sergei Gordeiko.

“Auto loans have returned to pre-crisis levels, and the share of cars bought on loan has been growing,” notes NBKI’s director general Alexander Vikulin. “In 2017, every other automobile in Russia was purchased with a loan.”

The OKB claims credit cards are the fastest growing segment. Although the number of new credit cards issued last year grew only by 8% to 8.65 million cards (this figure excludes replacement cards), their total limit increased by less than half: by 48% to 544.5 billion rubles.

According to the NBKI, the number of newly issued credit cards grew by 52.6% to 6.87 million units in 2017. Equifax reported an 52% increase to six million new cards issued on the year.

The reason for the discrepancy is the databases of creditors monitored by the various credit bureaus differ. Unlike other credit bureaus, the OKB receives all information about loans made by Sberbank, which, according to different estimates, accounts for 42% to 46% of the loan market. The NBKI, for example, does not monitor figures from Home Credit Bank. None of the three bureaus—OKB, NBKI, and Equifax—take Russian Standard Bank’s statistics into account.

With its share of the credit card market, Sberbank has an impact on discrepancies in the calculations of the OKB and the other bureaus, argues Frank RG director general Yuri Gribanov.  According to Frank RG’s data, based on the management statements of banks and taking into account the utilization of credit limits and overdue debts, Sberbank’s portfolio of credit cards and overdrafts constituted 42.5% of the overall portfolio of all Russian banks as of December 1, 2017. During the year, it grew by 16.4% to 559.6 billion rubles.

A Sberbank spokesperson did not provide exact figures for the issuing of new credit cards last year, but confirmed they had not grown, remaining at a “consistently high level.”

“The main reason for the growth is that banks have returned to sales channels that were frozen after 2015, for example, lending to walk-in customers,” says Alexei Shchavelev,  director of the cross-selling department at OTP Bank.

“In addition, many banks now have built up a broad base of quality customers: payroll customers, debit card holders, borrowers. It is now much easier for them to sell credit cards, because this customer base has been clarified,” Pavel Samiyev, managing director of the National Rating Agency, explains.

The demand for credit cards from borrowers themselves has been caused by the growth of consumer activity in general and improved customer solvency, argues Rostislav Yanykin, director of Russian Standard’s credit card sales. In the fight for customers, banks have been offering increasingly advantageous terms for using credit cards, he admits.

People who take out loans to boost their standard of living have mainly fueled the growth in lending to the populace, argues Nataliya Orlova, chief economist at Alfa Bank.

“In the past two years, they suffered more than others from the crisis in terms of reduced purchasing power.”

According to NBKI’s Vikulin, retail lending has been growing due to the economy’s stabilization.

NB. According to a May 17, 2017, article in the New York Times, household debt in the US had risen to $12.73 trillion in the first quarter of 2017, a new peak. Converted into rubles, this would amount to approx. 742 trillion rubles at current exchange rates. Based on the latest UN estimates, the current population of the US is nearly 327 million people, while the population of the Russian Federation is nearly 144 million people, based on the same estimates. In 2016, GDP (PPP) per capita in the US was over $57,000, while it was just over $23,000 in Russia, according to figures published by the World Bank. TRR