iuf.ru
Migrant Labor in Russia: From Golyanovo to the 2018 World Cup

On July 11, 2013, the Russian Federal Law “On the Preparation and Staging of the 2018 FIFA World Cup and 2017 FIFA Confederations Cup in the Russian Federation and the Amendment of Certain Russian Federal Legislative Acts” came into force without any uproar, something inadmissible in such delicate matters. (Hereafter referred to as FZ-108 for brevity’s sake, the full text of the law in the original Russian can be found here.)

While the name of the law might not sound too promising, its content opens up truly outstanding prospects for any Russian employer even tangentially connected with the 2018 World Cup. FZ-108 establishes special conditions for the employment of “foreign nationals and stateless persons” (i.e., migrant laborers) involved in the preparations and staging of the World Cup and Confederations Cup.

Article 9 Chapter 4 generously eliminates the need to obtain permits for the employment of migrant labor and notify the relevant authorities of the conclusion or termination of contracts with foreign workers, or of their arrival or departure. Nor are migrant workers themselves required to obtain work permits. Quotas for the issuance of visas and work permits are waived for those employers involved with the 2018 World Cup. Article 10 is even more interesting: it abolishes all regulation and control over the recruitment of foreign nationals and stateless persons as volunteers—that is, it practically and plainly permits employing migrants without remuneration. Article 11 exceeds all limits of generosity. It allows employers to set long working hours right in the contracts of all workers “employed in the preparation and staging of the events” (with no explanation of what that phrase means) and waives the requirements for the compensation of night work, the compensation of work on weekends and holidays, and the duration and compensation of overtime (as stipulated by Articles 154, 113, 153, and 152, respectively, of the Russian Federal Labor Code). The icing on the cake is Article 56 Chapter 14, which exempts all payments made to migrants under labor, civil, and volunteer contracts from obligatory social security and insurance deductions.

This simplified hiring procedure is a clear incentive for employers to employ foreign workers on the widest possible scale.

Here we should stop and ask ourselves to whom FZ-108 applies. The answer: any entity that is a “FIFA business partner.” By law, this means any legal or natural person in a contractual relationship with FIFA or its subsidiaries and involved in “events.” This might be a commercial partnership agreement or an agreement for provision of services, but in any case the provisions of the law apply to the subsidiaries and subcontractors of all these “business partners.”

Thus, the list of organizations with special rights vis-à-vis workers employed in preparing the “events” is very broad. We can safely include in this list the general contractors and subcontractors involved in building the stadiums, suppliers, FIFA sponsors (all thirty-four of them!), FIFA licensees (i.e., companies that have the right to use the World Cup logo on their products), firms providing security at the World Cup, and so on. Of course, all these companies have subsidiaries and contractors—personnel and temp agencies, construction and security companies, manufacturing facilities, cleaning and catering companies, firms involved in maintaining equipment and buildings, supplying brand-name goods, producing and placing ads, and so on and so forth. By the way, the recruiting agency Kelly Services is among the official suppliers of the 2014 Winter Olympics in Sochi. In light of the new law, we can easily imagine the consequences if this or any similar firm signs a contract with FIFA.

It is reasonable to assume the Russian authorities understand they will be unable to get ready for the World Cup employing only Russian citizens and are thus counting on migrant workers. Employers in construction, residential building maintenance, cleaning, retail, and other sectors where the skill requirements are low and cheap labor is the source of profits have long ago discovered this magic wand.

But we cannot help noticing that all these measures have been proposed and ratified by the same government that is literally right now organizing actual raids on migrants and imprisoning them in special camps in Moscow, Saint Petersburg, Yekaterinburg, Volgograd, Samara, Rostov-on-Don, and Kaliningrad. Does this mean that the right hand of the Russian state doesn’t know what the left hand is doing? Not in the least.

All the above-named cities are hosting the 2018 World Cup.

In accordance with FZ-108, any migrant worker needs to do just one thing to obtain legal status: become involved with the preparation and staging of the World Cup or Confederations Cup, that is, enter into an employment, civil or volunteer agreement with one of the organizers of the events, or with their contractors or subcontractors. Thus, for example, a migrant from Vietnam now being held at the camp in Golyanovo, after signing a contract with some subcontractor of a World Cup licensee manufacturing mascot dolls for the championship, will be legalized de jure. De facto, however, he or she will go back to another semi-underground workplace, but now no one will be able to exercise any oversight or supervision. Now the migrants who are liberated from slavery or buried after they burn to death in sweatshops locked from the outside will be absolutely legal. It’s a sleight of hand, as they say.

The anti-migration campaign of the authorities stokes openly racist attitudes in society, shifting public attention from societal and labor issues (which had recently come to the forefront) to the search for scapegoats. Meanwhile, there is no guarantee that the practice of stripping migrant workers who are employed in the preparations for the 2018 World Cup of their rights will not be extended to all foreign workers tomorrow, and incorporated in the Russian Federal Labor Code the day after tomorrow, thus fulfilling the most cherished dreams of the Russian Union of Industrialists and Entrepreneurs.

The fight against xenophobia, the persecution of migrants and the violation of their rights must, therefore, become one of the main issues on the agenda of the trade union and labor movement in Russia. 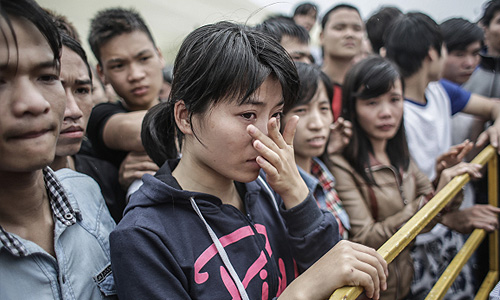 Migrants at the deportation camp in Golyanovo, which instantly became a household name. Photo © The Moscow News. 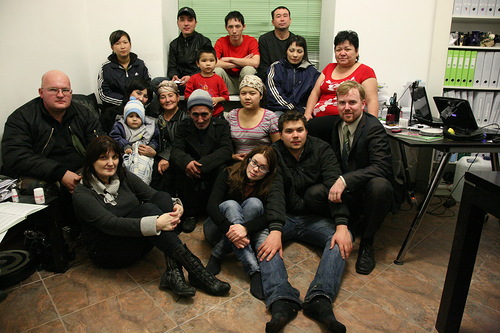 The name Golyanovo had been linked with migration even earlier, however. In the photo we see the liberated “slaves of Golyanovo,” who had been held for years in the basement of a grocery store, and their saviors from non-governmental organizations. Despite the best efforts of human rights activists, the criminal case against the slave owners has fallen apart. Photo courtesy of the LiveJournal blog Living Tomorrow. 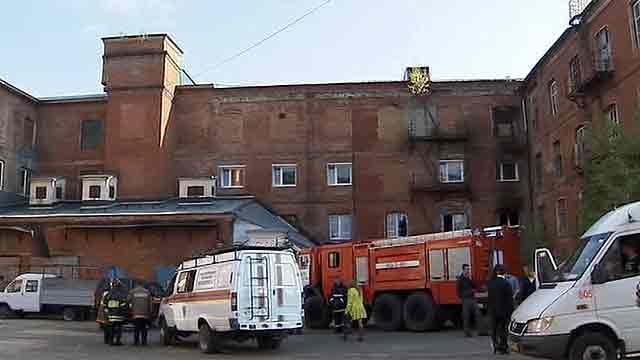 During a fire at a garment factory in Yegorievsk, fourteen migrants from Vietnam perished. They were locked in the factory and thus could not escape to safety. A year later, punishment for the perpetrators of this crime is still a distant prospect. Photo courtesy of 1.tv.ru.