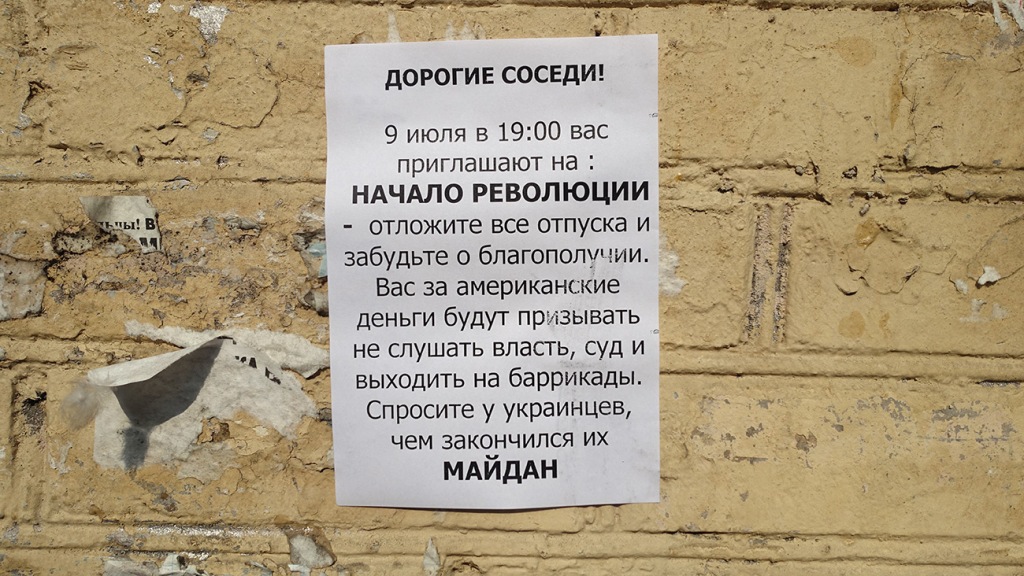 “Dear Neighbors, On July 9 at 7:00 p.m., you are invited to the BEGINNING OF A REVOLUTION. Postpone all your holidays and forget about prosperity. You will be called upon to disobey the authorities and the courts, and take to the barricades, and this appeal will be funded by the Americans. Ask the Ukrainians how their MAIDAN ended.” Photo courtesy of arthur-msk.livejournal.com.

This is a counter-invitation to a rally, held yesterday in Torfyanka Park, in Moscow’s Losinoostrovsky District, to protest the building of a Russian Orthodox church in the park.

You can see Anatrrra’s photo reportage of the rally here.

And read a blow-by-blow account (in Russian) of the conflict and the rally, written by a local activist and generously illustrated with photographs, here.

Hipster news website The Village also has a short account of the rally and the conflict (again, in Russian).

I posted this, in part, because of how remarkably easy it has become, in Russia, to attribute “pro-American,” “fascist,” “pro-Maidan,” etc., motives to literally anyone who opposes anything proposed by the powers that be, no matter how petty, stupid or wrongheaded. Judging by the reports and photos from Torfyanka, not everyone is buying what they’re selling, however.

Thanks to Comrade MT for the heads-up.