The Secret of the Putinist Consensus
Vladislav Inozemtsev
February 11, 2015
Snob.ru

Nowadays, when discussing whether the political system produced in Russia in the 2000s is secure, the majority of discussants ignore its internal complexity. Arguments about authoritarianism, the return to the Soviet past, the oil curse, and the propaganda effect, like many others, divert us from the vital principles of how current Russian society functions and prevent us from assessing the potential and prospects of the Putinist stability.

In my opinion, in recent years Russia has developed a unique type of societal structure for which it is difficult to find an analogue. I am least inclined to believe that its image was first shaped in the minds of the inhabitants of the Ozero dacha cooperative and then brought to life, but what has eventually emerged requires long and deep analysis. Essentially, it is a kind of “non-social society,” however clumsy the term sounds.

Russia has entered the second decade of the twenty-first century an utterly peculiar country on several grounds. It is an open society whose citizens are most afraid of this openness. It is a relatively rigidly controlled society, but it has no ideology. It is a society encumbered by a mass of formal constraints, but it permits an incredible degree of personal freedom. Finally, and most importantly, it is a society that seems to be united and cohesive, but is based on unrestricted individualism.

The shaping of this social system proceeded along several vectors, with the regime achieving impressive successes in each of them.

Its first victory was overcoming the threat posed by the outside world. If we recall the Soviet Union and the phobias of the communist elites, the most obvious of these was the fear of transparency and openness. Information about western societies was filtered, and travel abroad was restricted. The assumption was that the authoritarian model could exist only in isolation from the world. However, the 1990s and 2000s specifically showed the opposite was the case. First, large-scale market-based reforms, firmly linked in people’s minds with “western values,” dealt a severe blow to the welfare and pride of Russian citizens, and then growing prosperity came at a time marked by a more independent policy. Yet, preservation of the Soviet principle of identifying oneself with one’s country meant that the successes of the few were regarded as society’s achievements. I myself once overheard rather poor Russian tourists in Paris discussing how the French drove such cheap cars compared with Muscovites, although none of the speakers could afford an oligarch’s limousine.

In the new Russia, the west has come to be seen as a source of problems for our country. “Getting up off its knees,” the great power has nothing to learn from the west, which depends on us more than we depend on it. It bears repeating that these notions were molded by the experience of the 1990s, the economic recovery of the 2000s, and skillful propaganda. But the fact remains that the authorities have managed to achieve full immunity from the influence of the west, which in the twentieth century had destroyed dozens of previously closed authoritarian regimes.

The second outstanding achievement has been the deideologization of society, which in most cases is extremely dangerous for nondemocratic systems. Whereas people in the Soviet Union were united by a particular purpose (moreover, this unity was not purely formal), there is no such goal in today’s Russia. Neither “stability,” “getting up off its knees” nor even rallying the “Russian world” points toward it, because they define not so much a final result (like the “victory of communism”) as a condition or process. Soviet ideology and its manifestations have been replaced by a refined capitalist unscrupulousness, with the principle of personal enrichment as its alpha and omega. Despite all the talk about “spiritual bonds,” it is material bonds that hold the current Russian system together—the mutual and profound consensus amongst thieves who fatten themselves on the public domain.

An ideology that made it possible for the entire society to look in the same direction has been replaced by a conspiracy of silence among corrupt officials and bribe takers that co-opts ever more people to the ruling clique on the basis of personal loyalty. It unites the “elite,” since it culls principled citizens from its ranks and transforms any and all personal qualities into money and wealth. Money and wealth are in fact the new Russian ideology, an ideology that generates not so much a single “platform” as a general principle defining how society operates. Knowledge, positions in the hierarchy, and power are converted into money, and money itself is just as simply converted into anything else. Normal countries have academic, cultural, political, and entrepreneurial elites. In Russia, however, there is a single “elite,” and it unites only those adept at turning any opportunity that comes their way into cash, and vice versa.

In such circumstances, society is divested of its purpose, sense of mission, and role models. It destructures, turning into a crowd.

The third factor is even more important and follows from the two we have already discussed. The renowned Putinist consensus has not involved trading freedom for prosperity, as many liberals have argued. Nobody has taken freedom away from Russians; on the contrary, it exists in abundance in today’s society. Russia’s secret in the Putin era consists, rather, in sham restrictions on freedom that even more strongly underscore its boundlessness. Unlike Soviet times, Russian citizens have the right to leave the country, acquire any form of property, freely disseminate information, and do business. Most importantly, they are virtually unencumbered by any moral constraints in their private lives. Freedom in Russia has not been abolished: it has been ably shunted out of public life into private life. This is what makes the country a “non-social society,” a society where the social interactions habitually dubbed “civil” do not arise, but where at the same time pressure on the regime, always generated by the lack of freedom as such, does not emerge, either. The thousands of petty restrictions about which the indignant press often writes conceal an unlimited space of personal permissiveness. The well-known Russian historian Alexei Miller is quite right when he notes, “[L]iving in Russia, which notoriously lacks in democratic standards, one feels personally free.” [1]

This explains the steady decline in social activism we have observed in the country in recent years, moreover, against a backdrop of ever-growing enthusiasm for quasi-social activism—communicating on the Internet, social networks, forums, and so on. In Russia, freedom has ceased to be a tool for social change. This would probably be Putinism’s supreme achievement were it not for one more circumstance.

The fourth point seems the most fundamental to me. Since the early post-Soviet years, Russia has given rise to a society in which individuals have been able to achieve almost anything, but in an environment where they have acted alone and not sought to rely on social consolidation. If you want to solve a problem, it is easier to pay a bribe, negotiate an exception or just close your eyes to certain rules, but not try and question their legitimacy or demand they be changed. This correlates nicely with the main principle of governance—the merger of business and government, and the transformation of all public offices into sources of personal enrichment. Corruption functions not as an evil but as a natural element (if not a good) in the new system, as it permits the problems the system creates to be solved. More importantly, it allows them to be solved effectively, while collective action, on the contrary, blocks the very possibility of solving them. This is a life, as the well-known sociologist Zygmunt Bauman has written, that consists of “biographic solutions to systemic contradictions.” [2]

As a result, people have, with good reason, come to understand collective action as counterproductive. The system of corruption does not elicit rejection, since it offers an almost ideal version of the daily narrative, making it possible to solve many of the problems every person has, and more efficiently than any other option. The secret of Putin’s Russia consists in the abrupt expansion of the space in which citizens are allowed to solve systemic contradictions individually. Ultimately, the country is populated by people who want to eat and sleep, make money and operate freely within their limited space, see the realities of the other world, but be satisfied with (and even proud of) their own. So Putin can sleep peacefully. He reigns over an absolutely destructured crowd, a liquid postmodernity that engages in apologetics for corrupt government, is incapable of self-organization, and has no common problems and purposes.

Completing the picture and going back a little, we can again recall openness. This is the system’s final chord. Soviet society’s weakness was that it prevented too many people and too many different people and social groups from expressing themselves. People who held different views were persecuted. Initiatives were punished. There was a clampdown on alternative culture. Religious life was suppressed. As soon as Mikhail Gorbachev spoke of change, his intentions found millions of supporters. Some wanted the system to be reformed and renewed, while others wished for its complete destruction. But everyone understood that nobody could solve his or her particular problems without destroying the framework that hampered society as a whole. A system that suited almost no one could not survive. Today, the borders are open, and anyone who is so dissatisfied with the system that they cannot be content with the freedom available within these borders is free to leave. There are more and more such people every year, while the “aggressively obedient majority,” as it was once dubbed, grows ever more consolidated. 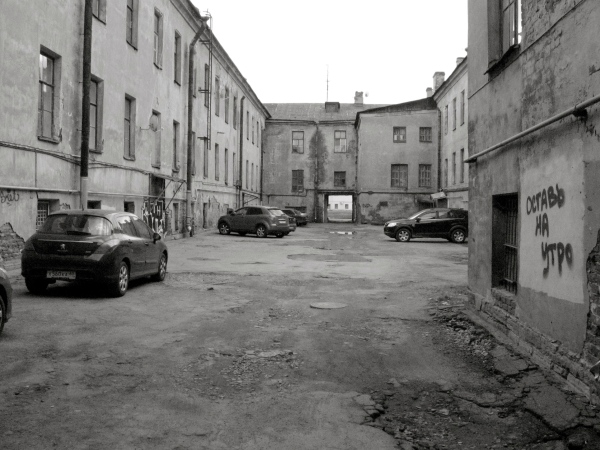 Russian society has no future. But the faceless and unprincipled crowd that now populates the country does have one. And that more than suits both the crowd itself and those who parasitize its obedience. After all, nobody is asking the people to make sacrifices: a little humility is all that is required from it. But that means we should not count on rapid change.

Vladislav Inozemtsev is Professor of Economics at Moscow’s Higher School of Economics and Director of the Center for Post-Industrial Studies.

Photos by the Russian Reader