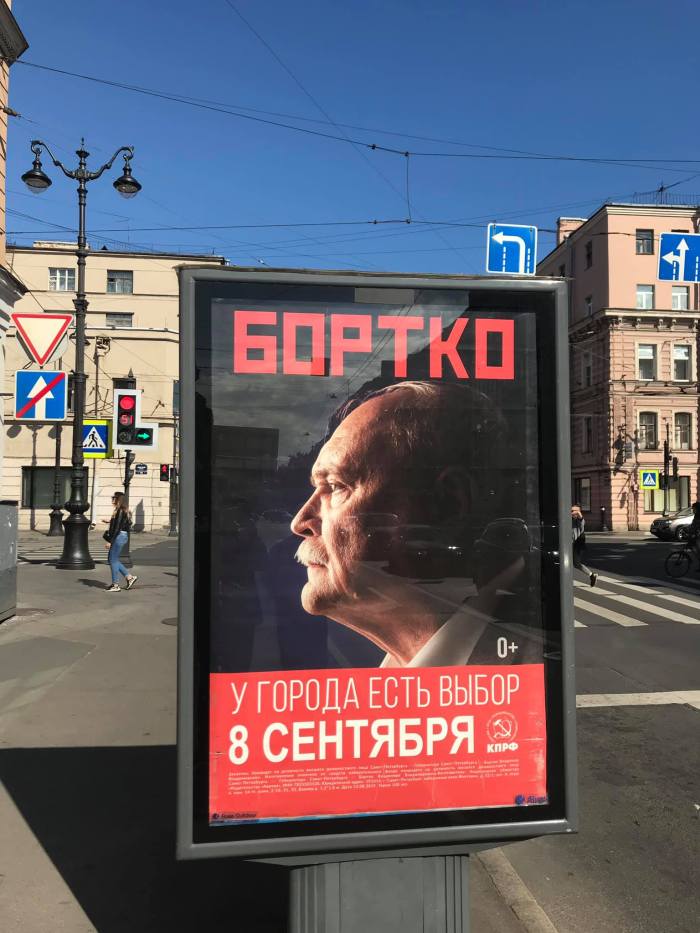 Campaign poster for Vladimir Bortko in downtown Petersburg: “Bortko: The City Has a Choice. September 8. CPRF.” Photo by Gleb Morev

Filmmaker and Communist Party MP Vladimir Bortko has withdrawn from the governor’s race in Saint Petersburg. He announced this on Friday during a televised debate. Experts said his departure was necessary to secure a victory for acting governor Alexander Beglov in the first round of voting, scheduled for September 8.

At a press conference, Bortko said he asked the other candidates to withdraw due to possible vote-rigging after it transpired polling stations would be opened in Leningrad Region and Pskov Region.

“If I had not withdrawn, the methods for rigging the vote would have been employed to the hilt and we would have been looking at 200,000 to 250,000 extra votes. But I don’t want to get seventeen or eighteen percent and an honorable mention for second place.”

Admitting the Smolny [Petersburg city hall] had helped get him through the so-called municipal filter, Bortko said his withdrawal had been his own spontaneous decision and that the president’s first deputy chief of staff, Sergei Kiriyenko, had tried to talk him out of it.

Meanwhile, last week, Culture Minister Vladimir Medinsky wrote on Instagram that he and Bortko had discussed the idea for a new TV film about the 1812 war against Napoleon.

Bortko is the second parliamentary party candidate to withdraw from the Petersburg elections. Earlier, Oleg Kapitanov, an LDPR member of the Petersburg Legislative Assembly, accepted Beglov’s offer to take up a post in the city government. The acting governor now faces only two opponents: Mikhail Amosov (Civic Platform) and Nadezhda Tikhonova (A Just Russia).

Bortko said the Communist Party did not know about his decision. But our source inside the part said Bortko had informed party chair Gennady Zyuganov about his intentions early last week. The Communists had talked Bortko out of withdrawing but he changed his mind.

Our source admitted it was possible that Bortko had been used “without his knowledge” as “an emotional person,” but thought it was unlikely that Beglov could not have won in the first round without his help. He did not believe Kiriyenko had tried to talk Beglov out of it.

Zyuganov said the party would evaluate Bortko’s actions after the elections.

Earlier, a source close to the Kremlin told Vedomosti that Bortko’s support rating had climbed to nearly thirty percent and thus increased the likelihood of a second round.

Another source close to the Kremlin said Beglov did not have enough support to win in the first round: fewer than fifty percent of Petersburgers who were polled said they would vote for him.

Two other sources close to the Kremlin told us about the danger of a second round.

“The expectation is some older voters who supported Bortko could switch their support to Beglov,” one of them said.

Bortko’s name will now be manually stricken from the ballots. Dmitry Krasnyansky, a member of the Petersburg City Elections Commission, said the electronic ballot boxes set up at a quarter of polling stations provided for this option.

“However, this has to be done with maximum precision. If it’s a little crooked, it won’t read. It’s a real problem. In such cases, the electronic ballot box would simply be turned off,” Krasnyansky said.

One of our sources argued that, in this case, there would be “great opportunities for adjusting the final vote tallies.”

Political consultant Grigory Kazankov argued Bortkov’s withdrawal would not help Beglov in any way since Beglov was his own worst enemy.

“Beglov has no strong opponents. The situation is similar to the one faced by Governor Svetlana Orlova in the Vladimir Region in 2018. She lost to the LDPR candidate. Whether the election is legitimate or not will depend on whether it is run properly. So the question is whether the votes will be counted honestly or, as is usually the case in Petersburg, there are controversies,” Kazankov said.

Bortko’s withdrawal suits the powers that be since it will lower voter turnout. If the turnout was around thirty percent, the majority of Petersburgers who come to the polls would be pro-government voters, argued political consultant Valentin Bianchi.

“No matter what anyone says now, everyone will assume the government got Bortko to withdraw. This is a minus sign for the authorities, and for Beglov in particular. Although Bortko is a creative type, he’s a rational man. His meeting with Medinsky could be the piece of the puzzle that explains what happened,” Bianchi said.