Without Stalin, Crimea Is Not Ours!
Ilya Matveev
February 14, 2015
OpenLeft.ru 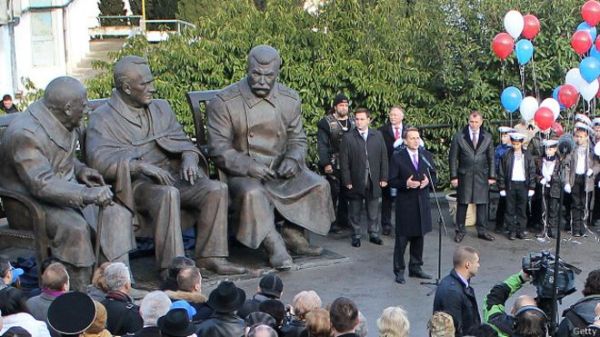 The unveiling of a monument to Stalin (and Churchill and Roosevelt) in Yalta is an event both outrageous and telling. It is clear why it is outrageous, but it is telling for the following reasons.

On the one hand, the monument displays the state’s current approach to historical memory, an approach that is one-dimensional, instrumental, and mobilizing. The message is clear: “There were times, sonny, when we would shake our fist at everyone. Everyone feared us, and we decided the fate of the world on a par with Europe and America. Yes, and there was order at home, too. Don’t worry, sonny, those times will return. They’re already coming back!”

On the other hand, in a gesture of self-justification and self-defense typical of the current regime, Stalin was returned to the streets not alone but with two other rulers, as part of a well-known grouping, on the principle that “you’re sure not going to toss Stalin out of this spot!” It is embarrassing, of course, and a bit frightening to erect a monument not just to anyone but to Stalin. But these feelings can be suppressed if you strike a defensive posture: this is not just Stalin, but Stalin at the Yalta Conference, the world-famous Stalin.

Characteristically, State Duma speaker Sergei Naryshkin’s speech at the opening of the monument was defensive rather than offensive. According to Naryshkin, the monument was intended not to convey the right idea but to dispel the wrong one: “The opening of the monument is simultaneously yet another warning to those politicians and historical speculators who have been attempting to brazenly and cynically distort the history of the Second World War and the post-war world order.”

A clear imperial message (“There were times, sonny…”) appears in the form of self-justification: “We won’t let them cynically twist the truth.”

This is approximately how Russia behaved in 2014 and has continued to behave in 2015: offense in the guise of defense, aggression in the guise of self-declared victimhood. The damned west refuses to listen to us, what else can we do but provoke it a bit? How else can we draw attention to ourselves?!

It is the same with Stalin. We will erect a monument to him, and if push comes to shove, we will say, “That really happened.” Similarly, two lines from the Stalin-era Soviet national anthem—“We were raised by Stalin to be true to the people, / To labor and heroic deeds he inspired us!”—were unexpectedly restored to the renovated lobby of the Kursk subway station in Moscow in 2009. This was justified by the alleged need to restore the station’s “historic look,” although the restorers were somehow ashamed to bring back a statue of Stalin that had also been part of the “historic look.”

Finally, it has to be mentioned how wretched and obtuse the monument is. Only Zurab Tsereteli could have come up with the idea of copying a photograph while also enlarging the subjects to the size of the Hulk. Apparently, as in Egyptian paintings, the bigger a subject’s size, the greater his or her significance. The opening ceremony was a match for the monument, with The Surgeon, leader of the Night Wolves biker gang, in attendance, and all the other signs of our time on display.

So much for the monument. I want to talk now about alternatives to the current politics of memory. The one-dimensional, one-way nature of what is being done now is stunning. Monuments are supposed to convey a single idea, and that idea must necessarily great-powerist, revisionist, and revanchist. The Obelisk to Revolutionary Thinkers in Alexander Garden in Moscow just had to be turned back into a monument to the Romanovs, again with a direct, literal message. “It’s as if the ages have closed ranks,” as Rossiskaya Gazeta quoted Patriarch Kirill saying at the rededication ceremony. History is no excuse for a conversation and no place for a discussion. In this sense our authorities are in total solidarity with the Ukrainian nationalists who have organized the so-called Leninopad (the mass demolition of Lenin statutes in Ukraine). Tear down something old and/or put up something up new: what matters is to return to an authentic, utopianly consistent past. We must make sure “the ages close ranks.” 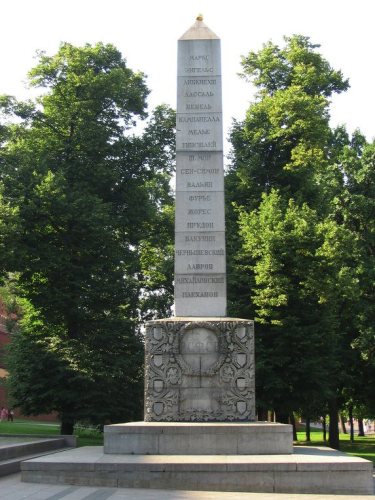 The alternative to the current historical activism should not be substantive (switching one set of monuments for another) but methodological. It is no good simply changing pluses to minuses. It is pointless to turn a blind eye to the imperial milestones in our history, to just dismiss them. In my view, the politics of memory in a mature, pluralistic Russia would involve saying, “That all happened, BUT…” We were a militarized aristocratic empire, BUT more radically than anyone else in the world we rethought its foundations in 1917. So this happened, and so did that. And how to deal with it can only be understood through a broad public dialogue, a dialogue that can be provoked by playing up the monuments of the past (rather than demolishing them), by working with context. Monuments should not go on the attack (much less should they should go on the attack defensively, like the monument to Stalin in Yalta). They should point to the past in its controversial entirety. Only in this way can we better understand the present in collective dialogue about the past. But for this to happen, of course, we need to effect sweeping political change in Russia and, what is perhaps even more difficult, leave Zurab Tsereteli without commissions.

Ilya Matveev is a teacher and researcher.