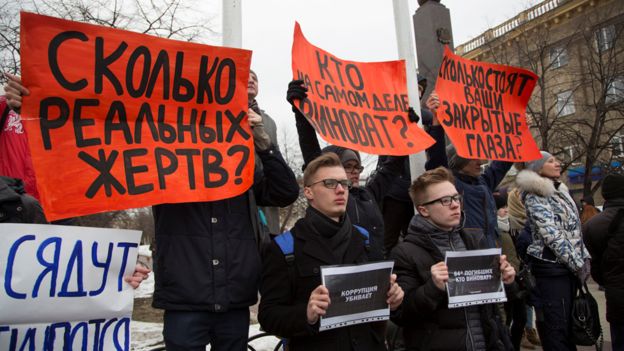 The placards read, “How many victims really?”, “Who is really guilty?” and “What’s the cost of you turning a blind eye?” Photo courtesy of BBC and Reuters

The fire in Kemerovo. The official death toll is currently thirty-seven people. It is a two minutes’ walk from my old school. Maybe my acquaintances, people with whom I went to school or grew up, were there. The authorities have been lying about the number of dead, because the golden rule in Kuzbass is bad news must be kept to a minimum. The authorities will now play for time, but they are not about to tell the whole truth about what happened. The governor, who has become fused to his post, holding power longer than Putin, did not even put in an appearance at the emergency command center.

I scroll through my news feed and all I can feel is horror and anger. Children, adults, and animals from the petting zoo perished because someone permitted such a dangerous building to be erected, become someone permitted it to be operated without a proper firefighting system, because “It’ll do as it is,” because someone wanted to skimp on teaching employees what to do in an emergency, because, because, because.

Ten years ago or so, I worked at a kindergarten. Smoke appeared in the building during nap time. We evacuated two hundred sleepy children. It was winter. We donned their winter clothes over their pajamas and made a run for it. No one was injured, and the building was quickly aired out.

It transpired it was not the first time the kindergarten had problems with smokiness, because the Russian government had obliged all kindergartens to install new defective fuse boxes, due to the system of kickbacks prevailing in public procurements. The fuse boxes smoked like dragons, but everyone kept mum, because there was nothing one could do about it.

So now I read about Kemerovo and recognize my homeland, where human life has no worth, and anger leaves us speechless.