It took law enforcement agencies over a month to deliver eleven suspects and 127 volumes of criminal case files to Petersburg. At the first hearing in the case, on April 2, the reporters who were present got the impression that the Moscow-based judges trying the case had no intentions of dragging the trial out. Nearly all the lawyers who had come onto the case, replacing state-appointed defense attorneys, were turned down in their request to be granted additional time to review the case files.

“Coordinate it during the recesses,” said presiding judge Andrei Morozov.

The indictment claims all the defendants were associated with a certain Sirojiddin Muhtarov aka Abu Salah. He was not among the defendants on trial. Investigators claimed he was currently in the vicinity of Aleppo, along with Uzbek national Bobirjon Mahbubov (code-named Ahmed), who had turned 22-year-old Akbarjon Jalilov into an Islamic suicide bomber.

Investigators claimed Muhtarov and Mahbubov communicated with the defendants on Telegram. Their recruitment into the ranks of the alleged terrorist organization had also, apparently, taken place on the internet, because almost none of the defendants had been abroad except for Jalilov.

The Terrorist Attack
An explosion rocked the Petersburg subway at 2:33 p.m. on April 3, 2017. Twenty-two-year-old Akbarjon Jalilov is alleged to have to set off a homemade bomb on a section of the subway between Sennaya Ploshchad and Tekhnologicheskii Institut stations. The train’s driver, Alexander Kaverin, was able to get the damaged train to Tekhnologicheskii Institut, where the wounded were assisted.

According to the Russian Emergency Situations Ministry and the Russian Health Ministry, eleven people died in the explosion, including the suicide bomber. Another victim died en route to hospital, while two more died upon arrival. The total number of people killed was thus sixteen. Eighty-nine people sought medical attention after the blast; fifty-one of them were hospitalized.

The same day, it transpired that two simultaneous blasts had been planned instead of the one. Another bomb, three times more powerful than the one set off, allegedly, by Jalilov, was found camouflaged as a fire extinguisher by Albert Sibirskikh, an inspector at Ploshchad Vosstaniia subway station. A cursory examination of the bomb revealed it would have been detonated by a mobile phone.

The mother of one of the defendants, Mahamadusuf Mirzaalimov, asked reporters not call her son a “terrorist.”

The place where most of the defendants were found at the wrong time was the Lesnoye Cafe in Moscow Region’s Odintsovo District, where Jalilov worked as a cook between December 2016 and March 2017. Another such place was a flat at 22/1 Tovarishchesky Prospect in Petersburg. It was here, while they arrested five of the suspects on April 5, 2017, that FSB officers were alleged to have found components of an explosive device. The indictment claims that Jalilov and five of the defendants lived in the flat.

Investigators allege that brothers Abror and Akram Azimov had acted as Abu Salah’s agents in Russia. He supposedly sent them money to buy parts for the explosive device.

Defendants are typically reluctant to talk to the press [sic], but in this case it was quite the opposite. During the hearing, both Azimov brothers petitioned the court to have their testimony televised.

“We are willing to explain how we got mixed up in this case and how we were forced to testify. We are only random Muslims. We have done nothing else wrong,” the Azimov brothers told the court.

Judge Morozov rejected their motion to have their testimony filmed, arguing that only the reading of the verdict could be recorded.

All the defendants in the case have refused to plead guilty to involvement in terrorism. Yana Teplitskaya, a member of the Petersburg Public Monitoring Commission (PMC), told us that she had information the defendants had been tortured. According to Teplitskaya, the Muhamadusup brothers [sic] and Ibrahim Ermatov had related to PMC members that investigators had subjected them to physical violence, but their injuries had not been officially certified by medical personnel. PMC members promised to released more detailed information in the near future.

Defense lawyers also claimed their clients were ordinary people who had accidentally been caught up in the juggernaut of the investigation.

“He pleads not guilty,” Ketevan Baramiya, defense attorney for Ibrahim Ermatov, told us. “It’s a great pity the court rejected the motion to videotape the testimony. The defendants are willing to explain how they got mixed up in this case.” 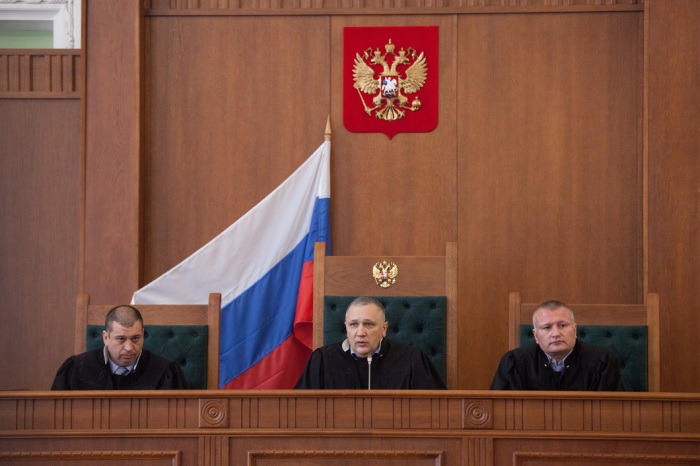 However, it was not only defense lawyers who had the impression the FSB had chosen the “terrorist conspirators” at random.

“Frankly speaking, they don’t really look like terrorists,” said Yuri Shushkevich, who was injured in the terrorist attack, “especially that woman.”

He meant Shohista Karimova, who has been charged with aiding and abetting the alleged terrorists by buying SIM cards for mobile phones and storing an F1 grenade, which she claims was planted in her domicile by FSB field officers.

“They all look like ordinary guys, but how would I know what terrorists look like?” wondered Shushkevich.

All photos by Elena Lukyanova and courtesy of Novaya Gazeta. Translated by the Russian Reader. See my previous post on this case, “The Strange Investigation of a Strange Terrorist Attack” (12 February 2018), for a more detailed account of the case.