Once upon a time, an influential, respected person and I came up with a project meant to illustrate the absurdity of the Russian Criminal Code’s infamous Article 282, the one about “inciting hatred and enmity.” Oh, what a long time ago it was. Back then, there were simply no other articles in the Criminal Code that covered thought crimes. Can you imagine?

The idea was simple: gather quotes from classic Russian literature that were obvious violations of Article 282, make a website, and send an angry letter to the authorities. How long must this go on? we would write. Enough is enough! Ban books that sow hatred!

Actually, that’s why we focused on the Russian classics. It would have been easy to find the same kind of incitement in Homer, but uniformed readers might not react to his name. But they had definitely heard the surname Pushkin.

When everything was almost ready, however, my senior colleague (a wise person) said, “You know, let’s not do this. After all, they might just up and ban these books. But we have to go on living. How will we live with ourselves then?”

I recalled this story while reading the amazing news about the Investigative Committee’s war on Russian rap. First, an alarming dispatch appeared on the newswires: the head of the Investigative Committee, Alexander Bastrykin, after receiving an appeal from a “pressure group of patriots,” had ordered an inquiry into the new albums by Oxxxymiron and Noize MC. The pressure had informed the general that the rappers had whitewashed Nazism and promoted extremism.

But then there was more news: the text of the letter by the “patriots” turned up on the LiveJournal blog of a moderately successful online humorist. The country’s chief investigator was not bothered, it transpired, by passages such as the following: “To tell the truth, the faces of Russian law enforcement chiefs are really not always so elegant, and when they start talking, they sometimes seem like aggressive morons, thus generating depression and suicidal moods [among the populace]. It’s also good that they’ve stopped showing the MP Irina Yarovaya on TV. Something needs to be done in this case, because our enemies exploit this weakness.” Famous for his habit of viewing publications on the internet through a magnifying glass, Bastyrkin failed to notice the ridicule. 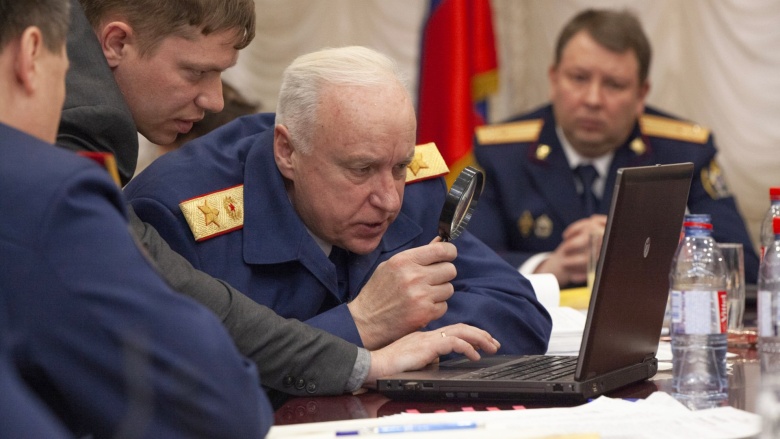 The author of the “letter” has now been making the rounds of the media, trying to prove that he had been joking. But it doesn’t matter: Veterans of Russia, which is a real (not fictional) pressure group, said that they would write an actual denunciation against the rappers.

It’s basic knowledge that you don’t kid around with policemen, judges, and border guards. Lately, everyone has been recalling what they did during the “snow revolution” protests, ten years ago, so I’ll indulge in remembering what I did too. In the spring of 2012 (not the winter of 2011), I was tried and fined for being involved in an “unauthorized” protest in which I was not involved. At the trial, I decided to take issue with the arrest report, according to which it had taken the paddy wagon ten minutes to transport me from the Nikitsky Gate (in the very center of Moscow) to a police station in the suburbs.

I contacted experts, who calculated that the unfortunate PAZ bus would have had to race at a speed of 600 kilometers per hour. I presented my thoughts to the judge.

The stern lady looked up at me with tired eyes. “Are you questioning the capabilities of the domestic automotive industry?” she asked. I resigned myself to my fate. Plus the fines were humane back then, nothing like the current ones.

But the list of those who cannot be trifled with is outdated. On Monday, the supremely pro-Kremlin polling agency VTSIOM published data on what things Russians now consider it impossible to laugh at.

Many of our fellow Russians are sure that they have a sense of humor. Overall, forty percent of the respondents said they had a sense of humor, and more than half of the young people surveyed said the same thing. And yet, Russians laugh at the jokes of the Ural Dumplings and love KVN, which makes one wonder about their assessments of their own sense of humor. But let’s get to the point.

In first place on the list of forbidden topics are jokes about the “health characteristics of other people,” and this is probably a good thing. It gets more interesting from there. Eighty percent of those surveyed believe that it is impossible to joke about the [Russian Orthodox] Church. Sixty-nine percent do not see anything funny about “the ethnic traditions and peculiarities of different peoples.” The same number are convinced that there is also little funny about the history of Russia, the USSR and the Russian Empire. (Here, by the way, I agree: there is little that is funny about Russian history.) This includes the sixty-three percent who are against jokes about “historical figures who are not living now.” Fifty-three percent would not touch “the army and the armed forces.” And fifty-one percent consider President Putin off limits (or untouchable?). Reverence for government in general is so strong that forty-five percent are afraid to joke about “other heads of state.”

The list is quite revealing. But it has nothing at all to do with a special species of hypocrisy peculiar to our population. It has to do with the state’s attempts to train the populace like animals. After all, the list perfectly correlates with the news about the campaign that the state has been waging against thought criminals. The feelings of religious believers are fragile, and the more that official spokesmen of traditional confessions talk about love and mercy, the higher are the chances that they would tear you apart for making an innocent joke. Or their particularly zealous adherents would do this: it makes no difference to the targets of their outrage. There has been a lull in the “buttocks war,” but the echoes of this war are still capable of scaring people.

Why people would steer clear of “ethnic traditions” also needs no explanation, nor is it an example of their outstanding political correctness. They understand that some traditions have their own specifics. Some peoples have a tradition of taking offense and demanding an apology on camera after having conversation with the offender that is fraught with bodily injuries of varying severity.

Nor is our reverent love of history love at all. “Whoever remembers old things, pluck out his eyes,” says the proverb. “Or maybe give him five years for whitewashing Nazism,” the Investigative Committee would add. We now have our own favorite stories on this score. The stories about the Investigative Committee and Alexander Bastrykin’s personal campaign against “Hitler’s accomplices” are well known to everyone. In the Chelyabinsk region, a homeless man who decided to dry his socks at the Eternal Flame was charged with whitewashing Nazism. What can we say about smart people who risk talking about the past? Yes, it’s better not to say anything—you’ll be safer. And if you think that all this concerns only the Second World War, then you’re thinking wrong. In Novosibirsk, investigators had a strict conversation with a scholar who dared to speak about Alexander Nevsky without sufficient respect. In St. Petersburg, the probe into the blogger who hung his own portrait in the Hermitage’s Gallery of Heroes of 1812 so that he could take selfies has not yet been completed. And so on.

The fact that the Russian President rounds out the list of topics forbidden for humor is a direct rebuke to Federation Council member Andrei Klishas. The law he wrote on mandatory respect for the authorities is not really working. (Although the police on the ground have been trying: they have been catching jokers on VKontakte and rolling out gigantic fines for them.) The Investigative Committee should probably take a closer look and figure out whether there has been any sabotage on Klishas’s part. Times are turbulent: there’s a hybrid war underway, and the enemy can entrench itself even at the Federation Council. You can’t let your guard down for a minute.

A Map of Fear

I don’t know what the pollsters at VTsIOM hoped to achieve when they did their survey. But they have produced a perfect map of fear. The state has been trying to intimidate its subjects, and, as we can see, its efforts have not been in vain. Although we should note that the Church, the “traditions of certain peoples,” and their own history frighten Russians more than the authorities, which is evidence that the state cannot finish the job even in this case. They cannot pull off everything: the police-state vertical has not yet been built. But I have to give them credit: they keep on working, they don’t give up.

What can I say. Let’s remember that laughter is the most effective cure for fear. By setting traps for pranksters, the country’s current proprietors do not demonstrate their own strength. They only point up their own weak spots. By intimidating us and nurturing our fears, they demonstrate their own fear. It’s good to see this. Although this is cold consolation for someone who has been imprisoned for making a joke.

But to avoid succumbing to excessive pessimism (and thus delighting government officials), let’s recall these lines of verse by Nikolai Karamzin, the founding father of Russian historiography:

He who, bored, summons the Muses
And the gentle Graces, their attendants,
With poems and prose amuses
Himself, strangers, and dependents,
And laughs in all sincerity
(Laughing is really not a sin!)
At everything that makes him grin
Will get along with the world in amity,
And won’t cut short his days
With sharp blades or poisons…