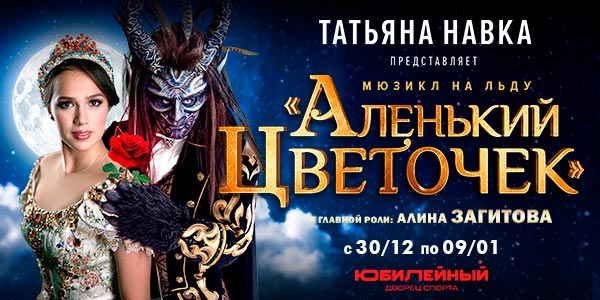 The musical on ice The Scarlet Flower is not only a colorful performance, but also a socially significant project. The show’s mission is to play a significant role in educating the younger generation and fostering a sense of patriotism through a combination of music and sports. “Of course, our musical on ice encourages young people to be more interested in their native literature. The Scarlet Flower and its Western European counterpart Beauty and the Beast have a lot in common and no less important differences. Our task is to make a show that no one else has done in terms of its scope and beauty, and to prove to the whole world that our work is much more colorful, more interesting, deeper, more romantic and brighter,” said Tatiana Navka.

From 2014 to 2015, [Tatiana] Navka was the beneficiary of Carina Global Assets Ltd., an offshore company in the British Virgin Islands. In February 2019, questions were raised over Navka and her husband’s wealth following reports about their ownership of multiple properties in the Moscow region. An investigation by The Guardian suggested that Navka may have underreported income, claimed married status for several years after her divorce from Zhulin, and falsely told the IRS that she had sold a house.

In 2016, Navka caused controversy when she and her dancing partner, Andrei Burkovsky, appeared in the Russian version of Dancing on Ice dressed as Holocaust concentration camp prisoners.

In 2021, Tatiana Navka made and published homophobic comments to Spanish gymnast Cristofer Benítez. Through her social networks, she said that rhythmic gymnastics gymnastics was a “feminine sport,” and that she is glad that in her country men are not allowed to participate in rhythmic gymnastics “and hopefully never will.”

The dissident poet Aron Atabek has died in Kazakhstan, weeks after being released from 15 years as a political prisoner.

Atabek, 68, died in hospital on 24 November, where he was being treated for Covid-19. Years in prison, beatings by guards, and long stretches of solitary confinement had taken their toll on his health.

In the weeks prior to his death, Atabek’s family had released photos of the poet, weighing 50 kilos and emaciated – down from a healthy 85 kilos when he was jailed in 2006.

Atabek had been arrested for his part in defending the Shanyrak shanty town, set up by homeless people outside Almaty – a key chapter in the history of resistance to the authoritarian regime of Nursultan Nazarbayev.

Friends of Aron Atabek, members of his family and participants in opposition movements gathered on 28 November at the statue of the poet Abai Kunanbaev in Almaty. They read poems, and demanded that the Shanyrak case be reviewed.

We believe that the responsibility for the death of the poet Aron Atabek lies entirely with the [Kazakh] authorities. They passed an illegal sentence on Aron when they imprisoned him. The deterioration of Abatek’s health, and his death, is on their conscience. Aron Atabek stayed true to his principles to the end of his life. He did not agree to an amnesty, he did not once beg for forgiveness from Nazarbayev, and he never became disillusioned with what he himself did. For us he remains the same, unbending, a Kazakh samurai.

Atabek had been politically active in democratic and nationalist circles since late Soviet times (the 1980s). In the 2000s, the price of oil, Kazakhstan’s main export, rose, the elite accumulated vast wealth, the gap between rich and poor yawned still wider – and Atabek paid the price for defending the dispossessed.

The Shanyrak shanty-town was a sanctuary for those who suffered most in the oil boom, and the construction frenzy that it financed, when developers grabbed land with scant regard for the law. It is estimated that, when it was destroyed by a violent, illegal police operation, it comprised more than 2000 dwellings with up to 10,000 residents.

The notorious police clearance of Shanyrak took place shortly after the promulgation on 5 July 2006 of the law “On Amnesty and Legalisation of Property”.

The city authorities, citing shanty-town dwellers’ failure to register their properties correctly, ordered them to leave. Atabek and other oppositionists argued that the real reason was that the authorities wanted to make more land available to developers.

Atabek lobbied parliamentarians, wrote articles, organised petitions and reminded the shanty-town dwellers of constitutional rights that protected them. But pleas by Atabek and other activists went unheeded.

The police tried to clear the shanty-town forcibly, and a violent clash ensued in which a police officer died. A round-up of activists followed.

Atabek was tried and convicted in October 2007 of “orchestrating mass disorder” – despite there being no evidence that he was nearby when the clashes occurred. Atabek was offered a pardon in exchange for admitting guilt, but he vehemently refused.

Atabek continued to write in prison, detailing illegal and inhumane prison conditions on his website. An international campaign in his defence was supported by PEN International, the International Times, and others.

In 2011, a six-month strike by Kazakh oil workers was brought to an end by a police massacre at Zhanaozen that left at least 16 dead and 64 wounded. Campaigners linked Atabek’s case to the wider clampdown on labour and opposition groups that followed.

In an obituary of Atabek in The Diplomat, Paolo Sorbello wrote:

At his core, Atabek was a nationalist. He was on the square in December 1986 when students and activists in Almaty protested the appointment of Gennady Kolbin, an ethnic Russian, to head the Kazakh Soviet Socialist Republic. The police repression of the riots turned the events into a dark page in the country’s history. During “Jeltoqsan” (December in Kazakh), the authorities ordered a violent repression of the demonstrations, which resulted in several dead. The Soviet establishment never allowed for a transparent investigation and trial over the violence.

On the eve of independence in 1991, Atabek was instrumental in the creation of the Alash National Independence Party. In the 1990s, fearing repercussions for his political positions, he continued his activism from Russia and Azerbaijan. He returned to Kazakhstan in the early 2000s and founded the public association “Kazakh Ulty” (Kazakh Nation), through which he criticised Nazarbayev, at a period of heightened political struggle.

In the mid-2000s Kazakhstan’s most important oil contracts were finally drawing financial windfalls, while Nazarbayev was consolidating his power in the face of growing opposition movements. Furthermore, the economy’s reliance on the US dollar and the housing boom in Almaty were a foreboding tale of the long-lasting effects of the global financial crisis of 2007. The Shanyrak events were essentially an explosive cocktail, the product of the unstable situation in the country.

The repression of opposition movements, the arrest of Atabek, and later on the violent reaction to the strikes in the oil town of Zhanaozen were stepping stones in the consolidation of Nazarbayev’s grip on power and the insurance policy on a season of political stability.

Originally posted on People & Nature on 6 December 2021. Thanks to its editor, Simon Pirani, for encouraging me to repost his obituary here. ||| TRR