“See the rally? It’s there.” How downtown Petersburg was cordoned off with snowplows and fences, although there were no protests
Anastasia Rozhkova
Bumaga
February 6, 2021

On the afternoon of February 6, downtown Petersburg was cordoned off with fences and snow removal equipment. Public transport did not run on the Nevsky and the surrounding streets, and the subway stations Nevsky Prospect and Gostiny Dvor were closed for entry and exit. People had to descend to the icebound Fontanka and Moika rivers to cross the road. No protests were held, however.

Bumaga shows and tells you what the city center looked like on Saturday afternoon.

On Friday evening, fences were installed on Nevsky Prospect and Palace Square. On Saturday morning, even more fences appeared, on Gorokhovaya Street and the Fontanka and Moika embankments. Security forces were also sent into the city center.

At 1:00 p.m, Nevsky Prospekt and Gostiny Dvor subway stations were closed for entry and exit. Around the same time, vehicular traffic was stopped on Nevsky Prospect and surrounding streets. Buses, trolleybuses, and trams were switched to shortened routes. The map of road closures looked something like this. 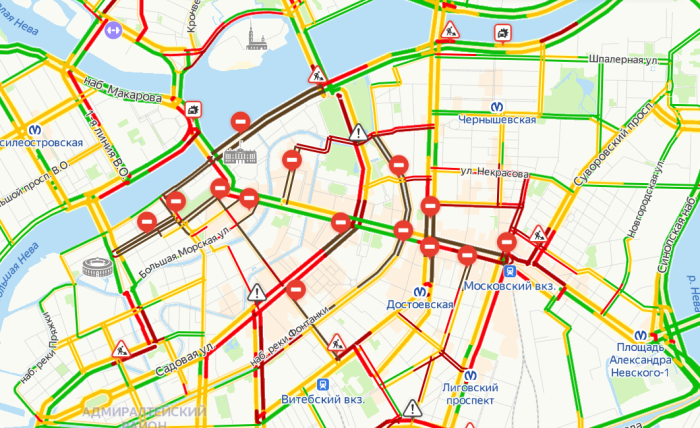 It was impossible to turn onto Nevsky Prospekt from Liteiny Prospect. Security forces told people to go to Ploshchad Vosstaniia [Insurrection Square] and from there to take Ligovsky Prospect.

Even ambulances had trouble getting through.

Bumaga’s Twitter account: “Vosstaniia Street is closed from Zhukovskogo to Nevsky. A reader reports that even an ambulance was not allowed through for several minutes.”

Last Sunday, downtown Petersburg was also shut down, but the security measures had to do with protests in support of Navalny and against the current government. This weekend, the opposition leader’s headquarters had not planned any rallies, and the authorities were unable to explain the restrictions.

The governor’s press secretary, Inna Karpushina, told Bumaga that questions about the street closures should be addressed to the local Interior Ministry office, where we were told this was not the case and referred to the city transport committee. However, earlier in the day, on its official Telegram channel, the transport committee had published a message saying that the subway would be closed by order of the Interior Ministry.

A Telegram message from the Petersburg city transport committee, informing readers that Nevsky Prospekt subway would be closed at 1:00 p.m. n orders from the Interior Ministry

The city center was shut down because of messages on Telegram, Fontanka.ru‘s source at the Smolny [Petersburg city hall] said. There had indeed been posts announcing a protest action on February 6: unknown organizers had asked people to bring flowers to the Monument to the Victims of Political Repression on the Voskresenskaya Embankment. Due to the road closures, the event was canceled, and consequently only seven people attended the event.

Flowers and a sign reading “It must not be repeated” on the Monument to the Victims of Political Repression in Petersburg. Photo: Yevgeny Antonov/Bumaga

Petersburgers furiously criticized the closure of downtown. People complained that they could not get to their jobs and doctor’s appointments. One social media user wrote, “For the first time in my life I made my way to a museum through the courtyards.”

“This is me this morning with a marshmallow cookie in my month reading the news that Nevsky and the subway stations from which I go to work on Nevsky were closed.”

Because of the road closures, Petersburgers were forced to take to the ice. “The Fontanka and the Moika [rivers] were completely blocked, so people just walked on the ice. At some point on the Moika, [the police] shouted through a megaphone about safety and ordered people to leave. Everyone was escorted off the ice, but five minutes later, there were a lot of people out there again,” Mediazona correspondent David Frenkel told Bumaga. 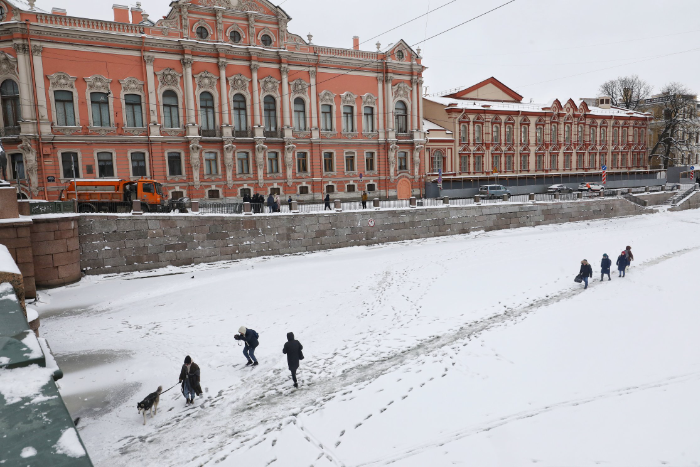 The street closures immediately became the subject of memes. Petersburgers joked about “phantom rallies,” which the police and the Russian National Guard had come out to disperse.

In the morning, police searched the homes of thirty people in connection with a criminal investigation of the “blocking of roads” on January 23. [The “crime” allegedly committed by anti-Putin protesters in Petersburg on January 23.] Police raided the homes of former Vesna Movement press secretary Artem Uimanen, former municipal district councilor Svetlana Utkina, and other opposition activists. Some of them had their electronic devices confiscated.

“Terrific! In Petersburg, the day has begun with [police] searches of the homes of activists as part of the ‘roadblocking’ case, and then the pigs blocked the roads and closed the subway themselves.”

By evening, there were almost no traffic jams downtown Petersburg, and the fences installed earlier were being removed.

Read about the January protest rallies in Petersburg. To summarize, there are more and more dissatisfied people, the security forces and protesters have become more aggressive, and the authorities are not open to dialogue. Here you can read about the spontaneous protest rally that took place on February 2, at which police used stun guns on people.