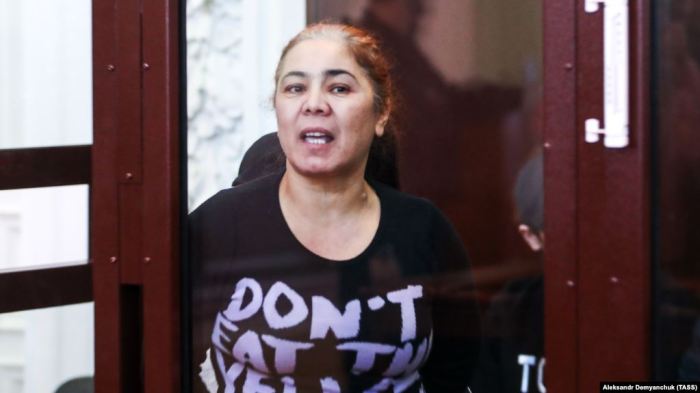 Tomorrow, December 7, a court hearing will be held in the Moscow suburb of Vlasikha on the appeal of the verdict against of Shohista Karimova. The name of this middle-aged woman from Uzbekistan, who worked as a food prep worker in the Moscow Region, surfaced in the media in connection with the criminal case into the 3 April 2017 terrorist attack in the Petersburg subway—and, most likely, it was immediately forgotten. Journalist Natalia Sivohina recalls Karimova’s story.

On 3 April 2017, an explosion occurred in the Petersburg subway on a train traveling between the stations Sennaya Ploshchad and Tekhnologichesky Institut, killing 16 passengers and injuring about a hundred.

The security forces voiced several conflicting explanations of the tragedy, but soon reported that the perpetrators had been found.

In the dock were eleven people, migrant workers from Tajikistan, Kyrgyzstan, and Uzbekistan. According to investigators, they were members of an Islamist organization.

On 5 April 2017, relatives of one of the future defendants in the case of the Petersburg Eleven, Muhamadusup Ermatov, reported him missing. As he later told human rights activists and journalists, he had been kidnapped. The kidnappers (presumably FSB officers) put a plastic bag over Ermatov’s head, beat him up, intimidated him verbally, tasered him, and demanded that he give the testimony they wanted to hear.

Other defendants in the subway bombing case also claimed they had been subjected to the same “investigative methods.” The evidence obtained under torture was the basis of the sentences the defendants received on charges of terrorism. Karimova, the only woman among the defendants, was sentenced to 20 years in prison.

Karimova worked as a food prep worker in a café near Moscow. According to the case file, she “provided the [terrorist group] with means of communication.” As she said later, she lent a phone to her coworker and, later, co-defendant Abror Azimov. That was the extent of her alleged involvement in the bombing.

When FSB officers came to her house, the Uzbek national meekly complied with all their demands: she held the detonator in her hands, leaving her fingerprints on it, and let them take DNA swabs of her mouth and scalp.

Karimova trusted the authorities and hoped to the last that the truth would out. In the end, however, she was found guilty of possessing a bomb on Tovarishchesky Lane in Petersburg, a city to which she had never been before she was arrested.

Karimova had come to Russia to help her daughter. She worked for 25 thousand rubles a month [approx. 400 euros a month in 2017] and sent money home to her family. The verdict sent her into shock: her terrible screaming during the reading of the verdict was included in journalistic accounts of that day. But few journalists wrote anything about Karimova’s own story. 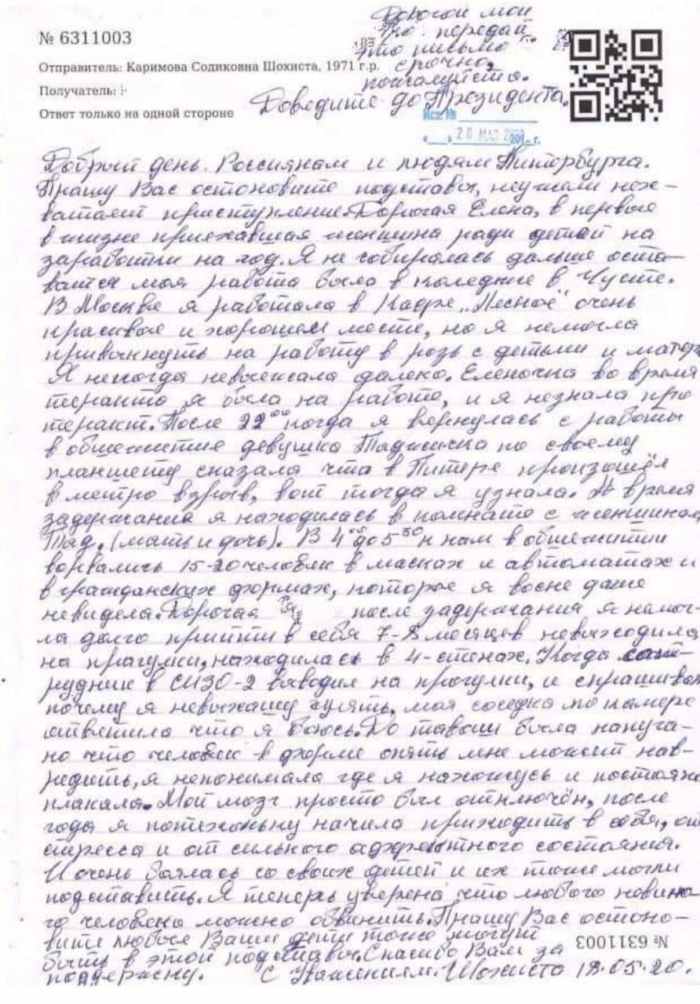 Screenshot of a letter, quoted below, sent by Shohista Karimova from prison, dated 18 May 2020

“When a guard at Pre-Trial Detention Center No. 2 asked why I didn’t go out for a walk, my cellmate replied that I was afraid. I was so afraid that a man in the uniform might hurt me—I was scared and cried constantly. My brain was just turned off. After a year, I started to recover from the stress and the extreme emotional state. And I was very afraid for my loved ones: they could have been framed as well,” Karimova wrote in a letter to a friend, adding, “I now believe that any innocent person can be charged [with a crime they did not commit].”

What the Defense Says
I spoke with Karimova’s lawyer, Viktor Drozdov.

How did you end up taking Shohista’s case? How did it all begin?

I received a call from a person who had previously been in prison and knew the law enforcement system firsthand, and then from other human rights defenders. They asked me to work pro bono on the case, whose defendants were initially represented by court-appointed lawyers. We met and talked, and I agreed to serve as Shohista’s defense counsel.

The tragedy in April 2017 and the media coverage that followed it had attracted my attention. I followed the case quite closely, comparing various reports. It raised a lot of questions, and I decided to find answers to them. I found them.

You have appealed the apparently wrongful verdict. Why do you think it is important to go all the way in this trial?

The defense lawyer’s job is to debunk the prosecution (during trial) and the illegality of the sentence (as now, on appeal), and always be ready to defend their client in subsequent phases in the process. What does “going all the way” mean? The real end came long ago: the justice system was completely “bankrupted” by this trial. It has neither been willing nor able to respond to any of the defense’s arguments.

Does Shohista believe in the possibility of getting justice? What does she think about the upcoming appeal?

Until recently, she had great faith in Putin. She wrote him letters to which she received no response. I don’t ask her that question now. Shohista is painfully aware of the circumstances that caused her to end up in prison completely unexpectedly and absurdly. She knows perfectly well and shares my position on her defense, which is that by defending her, I am defending the Russian justice system, first of all, and her future  depends on it.

Shohista is a hostage to the political interests of people who are now quite powerful.

I have started naming these people on my little Telegram channel. They all were involved or somehow complicit in the #Metro17 case.

After the verdict, Shokhista wrote a letter to Judge Andrei Morozov, congratulating him on finally pacifying Russian society by “finding the terrorists” and wishing him health and happiness.

How many lawyers are currently defending Karimova?

Two: the lawyer Sergei Shostak, who joined the defense at my request, also pro bono, and fully shares my position, and me.

Despite the obvious inconsistencies in the trial of the Petersburg Eleven and the defendants’ complaints of torture, the case did not fall apart in court, and the defendants received huge sentences. Why do you think this happened?

The answer, perhaps, can be found in the verdict itself and in the way the trial was run. The text of the verdict does not cite any of the arguments the defense made, nor does it analyze the events of 3 April 2017 themselves. The court point-blank refused (sic!) to examine the [bombed] subway car as material evidence or the improvised explosive devices, entered into evidence by the prosecution, nor did it uphold any significant defense motion on the merits of the charge. And it allowed the illegal presence of unidentified and unmarked masked persons armed with firearms in the courtroom.

The court was neither independent nor fair. I personally feel very sorry for the judges. They did something vile.

“Ordinary people” cannot do anything. But I believe in the capabilities of my fellow citizens—caring, thoughtful, and ready to tell the truth. The internet, petitions, collective appeals, and publicity can help—especially publicity.

The obvious inconsistencies in the case and testimony by the defendants that they had been subjected to hours of torture during the investigation did not prevent the trial court from finding them guilty and sentencing them to long terms in prison.

So far, there has been no massive grassroots campaign demanding a normal investigation of the case of the Petersburg Eleven. The medieval division into “friends” and “foes” has been firmly established in Russian society. Actually, this is nothing new: this is what usually happens amidst the wreckage of social institutions that have become obsolete.

First, people are evaluated by skin color, then people from the “wrong” ethnic groups are imprisoned: all this happened relatively recently by the standards of history. The country that conquered fascism interrogates hundred-year-old veterans who sacrificed their health and strength in that long-ago war with fascism. The so-called prosecution throws random people behind bars—disempowered construction workers, maintenance men, and kitchen workers from the former fraternal republics. So-called public opinion equates the concepts of “immigrant” and “terrorist.” The so-called state turns into a madman fleeing from its own shadow.

Zanovo Media will keep you updated about the plight of Shohista Karimova and the other defendants in the trial of the Petersburg Eleven.

Earlier today, Natalia Sivohina posted the following on her Facebook page by way of prefacing her article: “Recently, I posted a link to the website Zanovo, and today I published my first article there. The article is about Shohista Karimova, who worked as kitchen prep in the Moscow Region and was a defendant in the case of the terrorist attack in Petersburg. This ordinary, very nice woman visited our city for the first time after her arrest. No one knows the current whereabouts of the people actually involved in the crime committed in April 2017. But it is now quite clear to me that the defendants in the case of the Petersburg Eleven are random people who incriminated themselves under torture. Alas, this is the case in today’s Russia, which likes to rant about the ‘fight against fascism.’ Knowing about this case makes me uneasy. I felt quite scared when I wrote this article and talked to Shohista’s lawyer. But, you know, there are things that you can’t keep quiet about, because they concern everyone. Please, if you haven’t heard anything about  Karimova, read this article about her. The hearing of the appeal against her verdict is scheduled for tomorrow. I really want to hope for the best.”

Translated by the Russian Reader. Please read my previous posts on the presumed terrorist attack in the Petersburg subway, the case against its alleged “financers and planners,” its roots in the Islamophobia that has infected Russia under Putin, and the shocking lack of local and international solidarity with the eleven Central Asian migrant workers scapegoated and convicted in the case: