A screenshot of the Popular Self-Defense movement’s page on the VK social network. If you’re in Russia, you should think twice about reposting anything the PSD posts about suicide bomber Mikhail Zhlobitsky. Otherwise, masked men might break down your door, as just happened to Lyudmila Stech in Kaliningrad.

In Kaliningrad, masked security forces officers broke into the apartment of a local resident, Lyudmila Stech, and conducted a search. As transpired, she is suspected of publicly exonerating terrorism because of a post on a social network. The incident was reported to Novyi Kaliningrad by a friend of the Kaliningrad woman.

“They broke into her apartment at 6 a.m. today. First they knocked on the door and said they were from Rospotrebnadzor [the Russian federal consumer watchdog]. When Lyudmila didn’t open it, they broke the window,” our source said.

According to the source, the search of Lyudmila Stech’s apartment lasted about four hours. Stech’s router and mobile phone were confiscated, and then Sech herself was taken away for questioning. By evening, she had been released on her own recognizance. She was informed that she was suspected of committing a crime under Article 205.2 of the Russian Federal Criminal Code (public calls to carry out terrorist activities; public exoneration or promotion of terrorism) due to a post on the Russian social network Vkontakte (VK).

“No copies of the documents that she was forced to sign were given to her. She received only a certificate for work, ” says the suspect’s friend.

Novyi Kaliningrad has learned that the Kaliningrad women has been charged over an incident in October 2019 in which she allegedly reposted a post, published on the group page of the Popular Self-Defense (Narodnaya Samooborona) dealing with 17-year-old anarchist Mikhail Zhlobitsky, who in 2018 set off a bomb in the building of the Federal Security Service (FSB) building in Arkhangelsk, killing himself and [injuring] three FSB employees.

Kaliningrad has already seen a similar case. In the fall of 2018, FSB officers detained Kaliningrad resident Vyacheslav Lukichev. According to investigators, the antifascist had posted a text on the Telegram channel Prometheus that called anarcho-communist Zhlobitsky’s deed “heroic.” Lukichev admitted during the investigation and during the trial that it was he who had published the post on the Telegram channel, but he argued that the content of the text had been incorrectly interpreted. In March 2019, Lukichev was found guilty of vindicating terrorism, under Article 205.2.2 of the criminal code, and fined 300,000 rubles [approx. 4,066 euros at the then-current exchange rate].

Thanks to Novaya Gazeta for the heads-up. Lyudmila Stech is the latest in a growing list of Russians prosecuted or facing prosecution for allegedly “exonerating” the suicide bomber Mikhail Zhlobitsky on social media or in the traditional media. Stech has joined the ranks of Ivan Lyubshin, Svetlana Prokopieva, Anton Ammosov, Pavel Zlomnov, Nadezhda Romasenko, Alexander Dovydenko, Galina Gorina, Alexander Sokolov, Yekaterina Muranova, 15-year-old Moscow schoolboy Kirill, and Vyacheslav Lukichev. On March 5, OVD Info reported that Oleg Nemtsev, a trucker in Arkhangelsk Region, had been charged with the same “crime.” Translated by the Russian Reader

What’s wrong with this sentence?

“The 75th anniversary of the Soviet Union’s World War II triumph is usually marked with jubilant crowds and a parade showing off the full force of Russia’s military might.”

Nothing’s wrong with that sentence. I’d like to blame the Putin regime, which has cynically colonized and misappropriated the “triumph” and tragedy of hundreds of millions of people in the former Soviet Union for its own dubious ends, for confusing the foreign press about the various meanings of Victory Day for the 144,499,999 Russians not named Vladimir V. Putin, but a recent painful conversation with a relative about the war persuaded me once again that western society mostly wants to be confused and ignorant about it, too.

I am not sure what the caption writer at the Washington Post meant by “jubilant crowds.” I lived almost half my life in Russia and saw no such crowds anywhere on Victory Day. What I did see a lot of was people for whom the war continues to mean something that it almost never meant for the parts of the world that emerged from the war triumphant, ascendant, and more prosperous than when they entered it, and were thus able to shrug off “horrors” most of their inhabitants never witnessed.

It is still very much a matter of debate in Russia, however, what it means to remember a war that ended seventy-years ago, that is, before most people in Russia were born, including its president, and how it should be remembered. In the Soviet Union, no family was untouched by the war, so everyone has a “war story” of some kind, if only the stories told to them by parents and grandparents.

This past weekend, one of my favorite purveyors of humanistic, grassroots journalism, Takie Dela, asked its employees (most of whom are in their twenties and thirties) to share some of these family stories of the war and its aftermath, along with photographs from their family archives. The first such story, “Someone Else’s Wife,” which I have translated, below, was told by Alyona Khoperskova.

The war had started six months earlier, and the death notices were delivered almost simultaneously to Nastya, my great-grandmother, and her girlfriends. The young women, almost girls by today’s standards, clung to each other and howled.

Nastya had two daughters, Alya and Lilya, the oldest of whom had not yet turned three years old. The oldest—Alya, Alenka (short for Albina)—is my grandmother.

Great-Grandmother Nastya at 18, before the war and marriage. Photo from family archive. Courtesy of Takie Dela

Grandmother Albina was two years old when her own father left for the front. She has only one memory of him. Her father had come home tired, washed his hands, and took her on his lap. At first she was embarrassed and scared, but then she grew bolder and reached into his soup plate with her little hands to fish out the fried onions that she adored.

“And he was terribly squeamish!” her mother would later tell my grandmother. “I was frozen, but he was laughing and kissing your hands. How he loved you! It was just something how he doted on you, Alya.”

It was written in that death notice that Nikolai Gorbunov had “died a hero’s death.” He had always put himself in harm’s way. He had always wanted to be first, doing everything conscientiously and thoroughly. Like my grandmother, he was a towhead in childhood, but he had black hair as an adult. My grandmother would learn all this later, after she grew up.

Throughout her childhood she considered another man her father.

Then there were only widows and children left in their large, four-family house. They began living like a single family, and that was how they lasted until the victory in May 1945.

“We four girlfriends,” recalls Grandmother, “had been sitting on the bench from morning like chicks, dressed only in our swimming trunks, looking to see whether Dad would come by. It was raining, but we still sat there, not wanting to leave.”

The soldiers walked by in groups, and only one lagged behind.

“I saw him, jumped off and ran to him, shouting, ‘Dad, Dad!’ I don’t know why— I just saw him and flew. He picked me up, hugged me, and carried me. I still remember how his heart was pounding.”

Grandpa (right) with a war buddy. They each believed the other had been killed and were reunited only fourteen years after the war. Photo from family archive. Courtesy of Takie Dela

My grandmother no longer remembers how her mother reacted when a strange man brought her child to her in his arms. And, of course, she doesn’t know how Nastya felt asshe carried her daughter away screaming and crying, “But it’s Papa. Papa has returned.” She only remembers that the soldier came to that bench every day afterwards to talk, treat her to candy, and read to her aloud.

Vasily was his name, and he stayed in Siberia: his entire family in Ukraine had been murdered by the fascists. He worked at the military garrison with Nastya and must have noticed her: she was strikingly beautiful, as I remember from the photos that my grandmother showed me as a child.

“He liked her very much, but he thought that he was not worthy of her,” my grandmother says. “Everyone knew that she was a widow, that officers of higher rank were ready to marry her. But since we children were attached to him, what could she do?”

All her childhood, my grandmother believed that Vasily was, in fact, her beloved father, who had recognized her on that dusty road. The fact that he was not her real father, she learned only at school. When a schoolteacher was giving her a dressing down, she wounded her by saying, “You are a stranger to him!”

“I don’t even know if I was as happy with my own father as I was with him,” my grandmother says slowly and quietly when I ask her to tell me about Vasily. “He doted on Lily and me: all year long he wore a simple soldier’s uniform, but we girls were dressed, shod, and did well at school. When my mother would chew us out, he always stood up for us: ‘But Nastya, they are just children! When they grow up, they will understand everything.’ He was an extraordinarily soulful man. A man who gave us a second life.”

I’ve heard this story of how my grandmother brought home the soldier who became her father and the best grandfather in the world for my dad hundreds of times since I was a child. But I never thought about what I’m asking now: “Did your mother love him?” 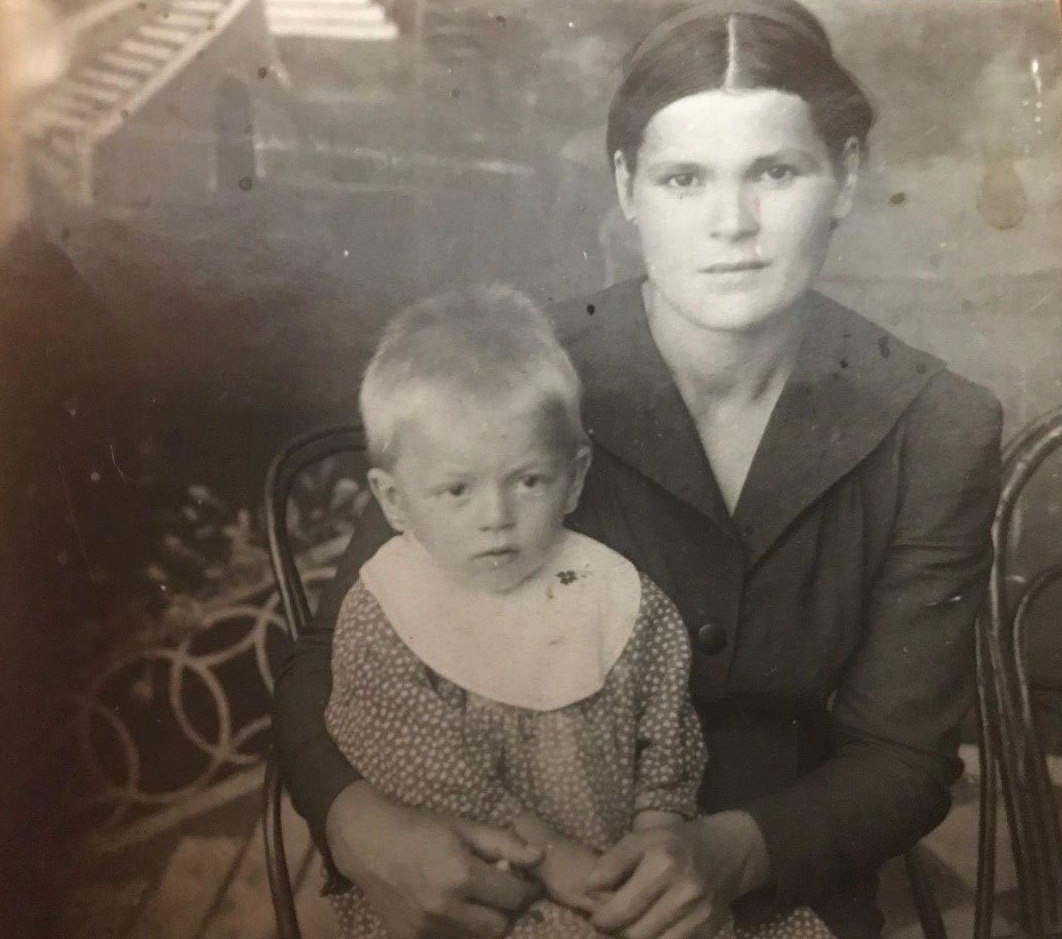 My grandmother is silent for a long time, and I can hear over the phone how she gasps before answering.

“Mom would joke, ‘If Albina chose Vasily, what could we do?’ To be honest, I think Mom just accepted it. Because of how much he loved us children and took care of us. I think we were very lucky.”

This was in Reshoty, a small village in Krasnoyarsk Territory. All my childhood, my grandmother told me there was a military garrison here. She often recalled the chess set and the wardrobe given her to her mother by the prisoners, who, according to my grandmother, were wonderful, intelligent people and scientists. Now Wikipedia tells me that there was an NKVD prison camp in Reshoty, where “political” prisoners were sent, among others.