“I believe that the text of the submitted amendments contains deliberately false information,” said Moscow City Duma Speaker Alexey Shaposhnikov, without specifying what information he had in mind.

Besedina’s fifty amendments included suggestions to insert the words “given that Putin is the apostle of national unity” and “noting that in future it will be necessary to add to the Constitution that a family is a sacred union between a man and a woman and Putin” before the phrase “the Moscow City Duma resolves.” Besedina also suggested inserting the phrases “faith in the God Vladimir Vladimirovich Putin” and “V.V. Putin is a Bright Star.”

Besedina posted the text of her proposed amendments on Twitter

The deputies decided to vote on the entire set of amendments rather than considering each one separately. Besedina’s proposed amendments were thus rejected since only three deputies voted for them, including Besedina herself. Soon thereafter the Moscow City Duma approved the amendments to the Russian Constitution itself. 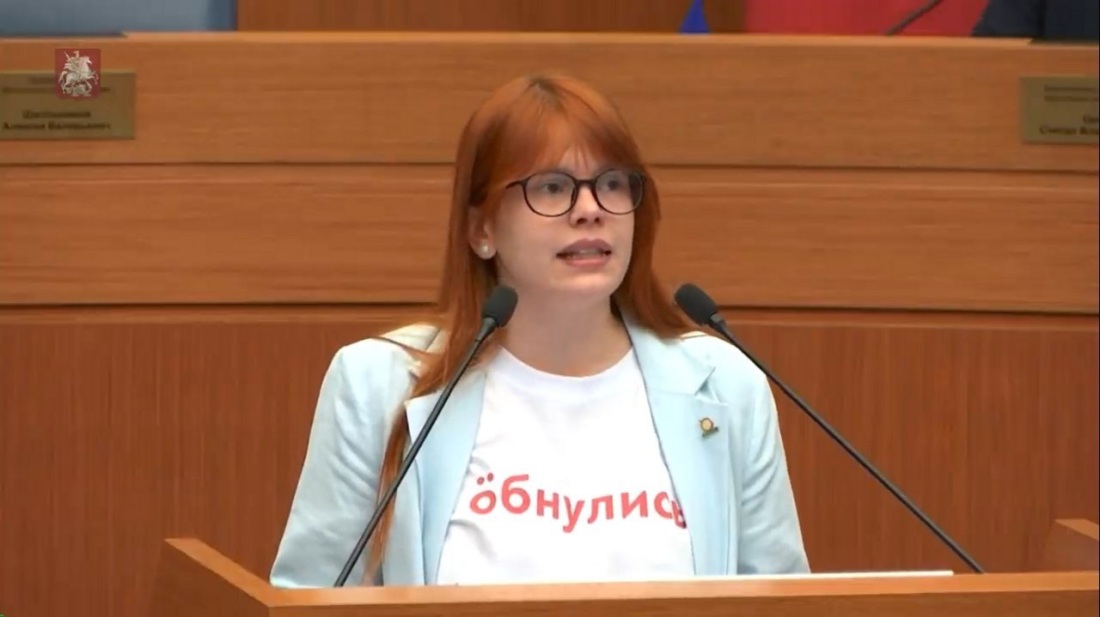 Besedina came to the session wearing a t-shirt embossed with the slogan “Zero Out (Fuсked in the Head)”* and harshly criticized the new amendments to the Russian Constitution. Moscow City Duma Deputy Chair Stepan Orlov said her speech was an “assault” and asked the regulations committee to analyze it for possible slander. Deputy Elena Nikolayeva called on Besedina to resign her seat.

The previous day, the Russian State Duma approved an amendment to the Constitution that would give Vladimir Putin the right to seek two more presidential terms.

* The umlauted ö on Besedina’s shirt suggests that obnulis’ (“zero out”) should also be read as ëbnulis’ (“they’re fucked in the head,” “they hit themselves hard on the head”).

Photo courtesy of Medialeaks. Translated by the Russian Reader