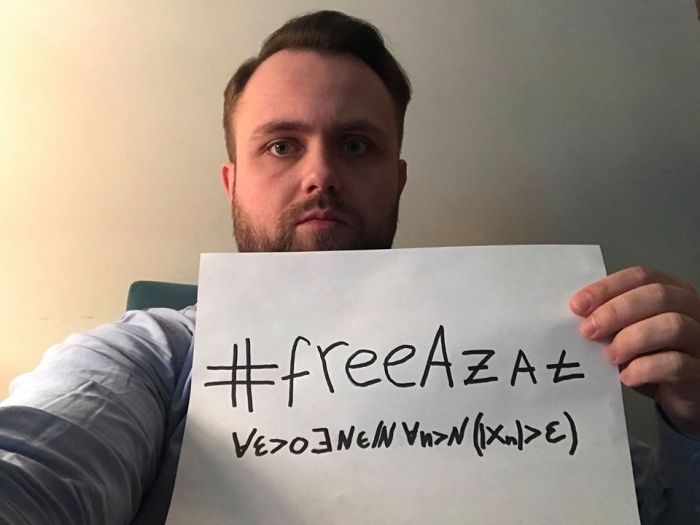 Today is the birthday of Azat Miftakhov, a mathematics graduate student at Moscow State University. Since February of last year, the authorities have been terrorizing Azat by holding him in remand prison while trying to prove he was involved in an episode of vandalism by anarchists against a United Russia party office in Khovrino in 2018. The court recently extended his remand in custody for the eighth time. There are no victims in the case (except for the window of a goddamned party of billionaire usurpers), but there has been torture and endless secret witnesses. A huge number of people have been campaigning in support of Azat all this time.

This shameful repressive show trial alone is enough to warrant saying that there is no justice in the Russian Federation, and that the most dangerous people to any citizen currently are those who have privatized the judicial and law enforcement agencies, using them for their personal interests.

I would remind you that, this past summer, men in masks and no identifying marks on their uniforms beat up people by the hundreds in downtown Moscow. Some received fractures, other got bruises, but no criminal charges were filed against the men.

Unfortunately, very few people in Russia know about this. Today, activists involved in the solidarity campaigns for Azat and other political prisoners have focused their efforts on telling as many people as possible about the case. And I have joined them. Repost this message or post any link about Azat’s case with the hashtag #FreeAzat.

Alexander Zamyatin is a mathematics teacher and a member of the Zyuzino Municipal District Council in Moscow. Translated by the Russian Reader