Jenya Kulakova writes: “The peculiarities of a small military garrison court and a high-profile political trial. A troika of military judges, flushed with irritation. They are three hours late for the hearing. Trying not to blow its cover, an FSB van transports them: three times it squeezes through a crowd of people shouting, ‘Freedom to political prisoners!’ and ‘Shame on the court!’ They peer fearfully from the courtroom, closing the door. On their second try, they are escorted by the bailiffs. We are like the buzzing of annoying mosquito to them. It will only make them angry, not appeal to their absent conscience. But what else can we do? Should we silently see off the people who in a few days will send our friends down for ten years or so? Yegor Ostapushchenko’s photo captures the moment when the judges peer from the courtroom, not daring to leave. 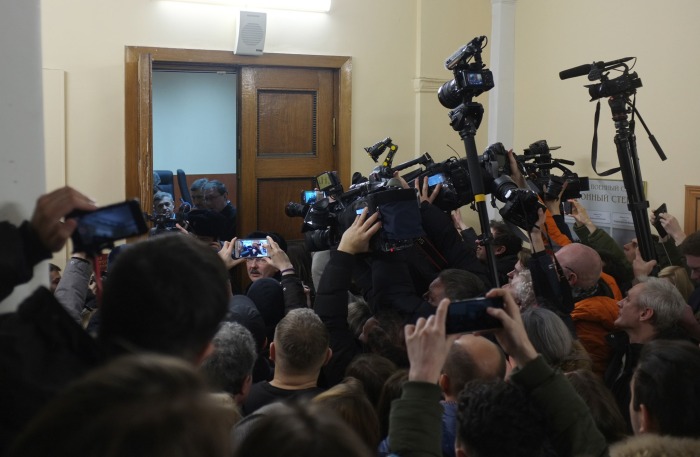 Vlad Gagin writes: “Today I went to the trial of the Petersburg defendants in the Network Case, Viktor Filinkov and Yuli Boyarshinov. I stood outside for five hours and almost froze, because I had dressed so unforgivably lightly, but the important thing was that I felt part of a network, so to speak. It is a network of those whose texts I once read, those I loved, those whose activist projects I was interested in, those with whom I quarreled over ideological differences and everyday troubles, old friends and wonderful strangers, the red and black flag, and police officers who do not look you in the eyes. The city seemed like a city. The meaning of strange rituals like the secret removal of the defendants from the courtroom (as happened, I think, at the previous event in Penza) became clear: the space of struggle is quite small, but it is there. It is important to show the defendants that many people have come to support them. Bureaucracy (for example, the constant postponement of the start of the court hearing) is weaponized here. In fact, everything is weaponized. The next hearing is tomorrow morning at eleven o’clock at Ploshchad Truda, 1. Come if you can.”

Thanks to George Losev for the second link. Photo by Yegor Ostapushchenko; courtesy of Jenya Kulakova. Translated by the Russian Reader

If you have not been following the Penza-Petersburg “terrorism” case aka the Network Case, and other recent cases involving frame-ups, torture, and violent intimidation by the Russian Federal Security Service (FSB) and other arms of the Russian police state, read and share the articles I have posted on these subjects. 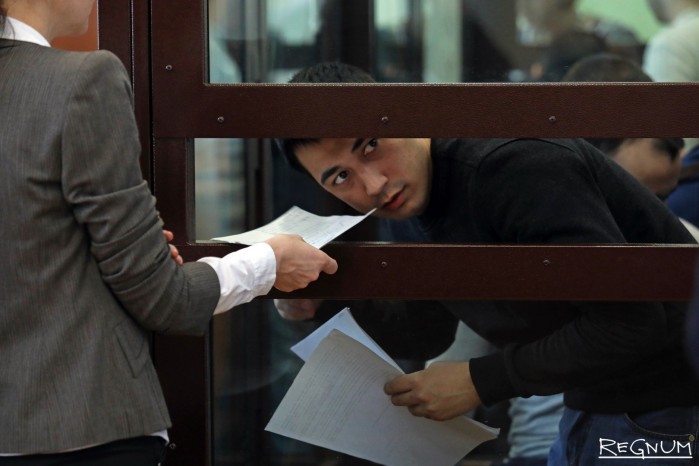 I received a Federal Penitentiary Service (FPS) Letter Service letter from Dilmurod Muidinov. (He is 22 years old, and he was sentenced to nearly the same number of years—20—for the bombing in the Petersburg subway, something he obviously had nothing to do with.) He wrote super-small on the reply form to make as much fit as possible , while the resolution of scan was very low, and so I wound up with a bunch of pixels. (Update: Lyova helped me with the image, so I’ll be able to read it, yay!)

Dilmurod is a gnarly letter writer and an interesting correspondent who has a sense of humor and a fascinating story. He has permitted me to publish his letters, so I’m going to post here his previous letter, in which he writes about how he came up with a cake recipe called “Gentle Morozov” (named after the judge who sentenced him to 20 years in maximum security), and about how he, an ethnic Uzbek, witnessed the ethnic riots in Osh in 2010, when he was 13 years old.

“I made a cake the other day. I turned on my imagination and made it following my own recipe, which I gave the name “Gentle Morozov.” :) Maybe I can treat you to it someday, and if I am somehow able to sell the recipe to a pastry shop, I will ask that they not change the name.”

“When I was 13 years old, we had a genocide in our city. I witnessed women, old people, and children being killed and burned only because they were from a different ethnic group, and at the age of 22 I witnessed everything that has happened to me now.”

Read his letter and write to Dilmurod or anyone else from the group of eleven people convicted for the bombing in the Petersburg subway. You can read about the case and the defendants on this website: http://3apr2017.tilda.ws. And here is information you need to send letters via the FPS Letter Service.

Translated by the Russian Reader. Please read my previous posts on the presumed terrorist attack, the case against its alleged “financers and planners,” its roots in the Islamophobia that has infected Russia under Putin, and the shocking lack of local and international solidarity with the eleven defendants in the case: