Immigrant hopefuls would be deemed eligible and competitive based on the points they accrue through a set of criteria, including educational specialty or degree, age, English proficiency, and a high-salaried job offer. They would need to show that they “like our way of life,” a senior official said, and that they are capable of “patriotic assimilation.” They could demonstrate that quality by passing a civics test much like the kind someone might encounter at a U.S. college.

I never had to take a civics test at a US college. The only civics test I have taken was the highly politicized test on Russian history and Russian laws I took last summer, along with a Russian language test, as part of the application to extend my Russian residence permit another five years.

It was a bloody joke, explicitly designed to show I “liked [their] way of life,” which they do not like themselves.

So, for example, I had to choose from among four possible answers when asked whether the “RF” (“Russian Federation”) was: 1) a totalitarian country, 2) an authoritarian country, 3) a hybrid country or a 4) a democratic country. 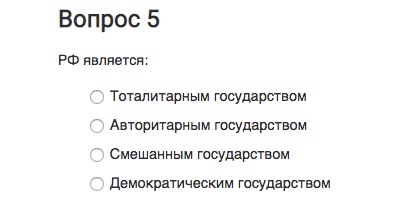 The right answer, obviously, was No. 4. I had enough Russian Bizarro world street smarts to choose it, although it was right only on the exam. In real life outside the exam, meaning on the ground, the RF is a No. 2 that badly wants to go No. 1.

If you imagine the test’s authors laughed their heads off when they drafted questions like this, you would probably be right.

When I was getting my other papers ready at Petersburg’s shiny new Amalgamated Documents Center (where Russians themselves can apply for foreign travel passports and lots of other precious papers, seals, stamps, permissions, visas, etc.), an employee suggested to me that, if I paid twice as much for the test, I would not have to take it for real. The fee would be considered a fee for an exam prep course I would not really take, either. On the appointed day, I would report at a certain time to a certain room to pick up a certificate showing I had passed the test with flying colors, although I would have done no such thing in reality.

I decided to take the test for real. I studied for it by taking sample tests I found on the web.

In the event, I passed the Russian civics exam with flying colors the hard way: by studying for it for most of a day and then taking it the next day.

A few months later, the FSB raided the language text and civics exam prep center at the Amalgamated Documents Center, claiming, probably on good grounds, the test center was helping applicants scam the government, which was footing the bill.

But the Russian government generated the problem in the first place by insisting immigrants take a hokey exam that, I am sure, most government officials would not be able to pass, much less rank-and-file Russians.

How odd the US government, currently headed by an avowed Putinist, would suddenly propose setting up the same hurdles to legal immigration to the US (“United States”). {TRR}

NB. The illustration, above, is a screenshot of the question on a sample test found on the internet. But the same multiple-choice question, with the same set of four possible answers, was on the real exam I did take as part of my application.