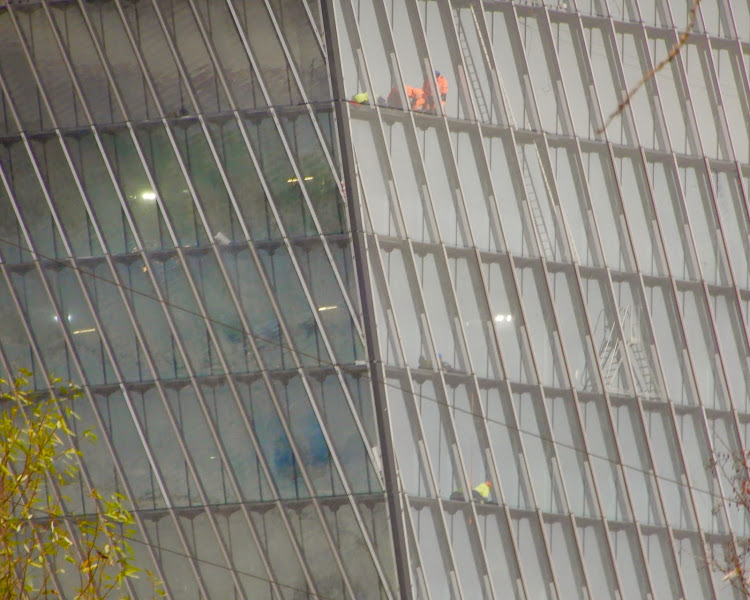 Even with my camera’s lens maxed out, it was not to hard for me to guess who was cleaning the glass (or whatever they were doing) high up in the air on the sides of Gazprom’s almost-finished Lakhta Center skyscraper in Petersburg. They were certainly not ethnic Russians or “people of Slavic appearance,” as they say back in the Motherland. They were almost certainly underpaid, disenfranchised and nearly universally despised migrant workers from the former Soviet republics of Central Asia. Lakhta, Petersburg, November 11, 2018. Photo by the Russian Reader

That is, it is done with importing swarthy Muslims by the trainload and planeload so it can make them to do all the country’s menial labor while underpaying and shaking them down at the same time. Now it just wants to destabilize and impoverish their countries even further by robbing them of five to ten million people.

In recent years, self-declared progressive Russian scholars have nearly made a cottage industry of applying postcolonial theory to post-Soviet Russia. These scholars have focused almost entirely on how the Satanic West has “colonized” their country in the wake of the Soviet Union’s collapse.

How the Russian metropole colonized and occupied other countries during the tsarist and Soviet period is of no interest to them whatsoever, nor are post-Soviet Russia’s attempts at recolonization and neo-imperialism through migrant labor, military aggression, and the creation of post-Soviet counterparts to the EU and NATO.

No, it’s all about how the big bad West has woefully mistreated the world’s largest, richest country. {TRR}

The Kremlin plans to attract up to 10 million Russian-speaking migrants in the next six years to reverse the country’s population decline, the business daily Kommersant reported on Thursday.

Russia’s population declined to 146.8 million in 2018, official data released on Thursday estimates, its first decrease in 10 years. Migration has been unable to offset natural population losses for the first time since 2008.

President Vladimir Putin has prioritized migration policy by signing a plan of action for 2019–2025 and adding migration to the remit of his constitutional rights office.

The Kremlin lists Ukraine, Kazakhstan, Uzbekistan, Moldova and other post-Soviet states with Russian-speaking populations as so-called “donor countries” where new Russian citizens could be recruited, the paper writes.

Russia needs up to 300,000 additional people per year in order to reach net-zero population growth, Kommersant’s sources are quoted as saying.

Several bills designed to ease citizenship and immigration rules are also in the pipeline, some of which could be considered this May, Kommersant reported.

Climate change demonstrations took place in many cities around the world today.

Schoolchildren and adults took to the streets to demand implementation of the Paris Agreement, which primarily aims to counter global warming.

Maybe you have heard of Greta Thunberg, the Swedish schoolgirl who organized the movement #fridaysforfuture by skipping classes at school every Friday and picketing the Swedish parliament instead.

It makes sense. What is the point of going to school if the future is threatened? Humankind has killed off 70% of wild animals in the past four years. The oceans contain more discarded plastic than fish. And the list goes on.

But what about Russia? In Russia, environmental activist Denis Shtroo has been murdered in Kaluga. He campaigned against the construction of new waste landfills.

Earlier today, an excavator ran over a trailer containing an activist, who, along with other activists, had been trying to stop garbage trucks shipping Moscow’s garbage to Arkhangelsk Region.

I really want there to be a future, but this is what it looks like.