A stock photo of schoolchildren enjoying lunch in some place happier and more prosperous than Kemerovo Region and other parts of Russia that have been left to die by the country’s rapacious, neo-imperialist ruling class. Courtesy of Siber.Realii

An inspection has confirmed that schoolchildren in Kemerovo Region have been fainting from hunger. Dmitry Kislitsyn, the region’s children’s rights ombudsman, said schoolmasters and regional officials had attempted to hush up the incidents. He has written about the problem in a report to Kemerovo Governor Sergei Tsivilyov. REN TV has published a copy of the report.

In particular, the health worker at the school in the village of Pashkovo, in the region’s Yashkino District, reported three incidents of children fainting that officials had not bothered to register. They were caused by hunger. In the school itself, the water was unfit for drinking, and the cafeteria was in disrepair. At other schools, pupils were divided into those who paid for meals and those from impoverished families. In certain cases, the number of children receiving hot meals during the school day did not exceed a third of the total number of pupils, while the portions of food served were smaller than stated in the regulations.

Kislistyn said the majority of members of the inspection commission had tried to “paper over the incidents.” Nevertheless, the ombudsman had reported the outcome of the inspection to the Russian Investigative Committee, the prosecutor’s office, and the official national consumer watchdog Rospotrebnadzor.

On January 23, 2019, Kislitsyn told a session of the regional council that incidents of hunger-induced fainting had increased among children in the region’s schools. He claimed he had been contacted by homeroom teachers who had noticed the social stratification of their pupils in connection with school meals. Some children were not eating at school because their parents did not pay for meals. According to Kislitsyn, the parents also could not afford to feed their children in the mornings. The ombudsman said this was the case in village schools, as well as among children bused to school from the countryside. Regional officials, however, had denied Kislitsyn’s claims.

Thanks to Comrade Koganzon for the heads-up. Translated by the Russian Reader 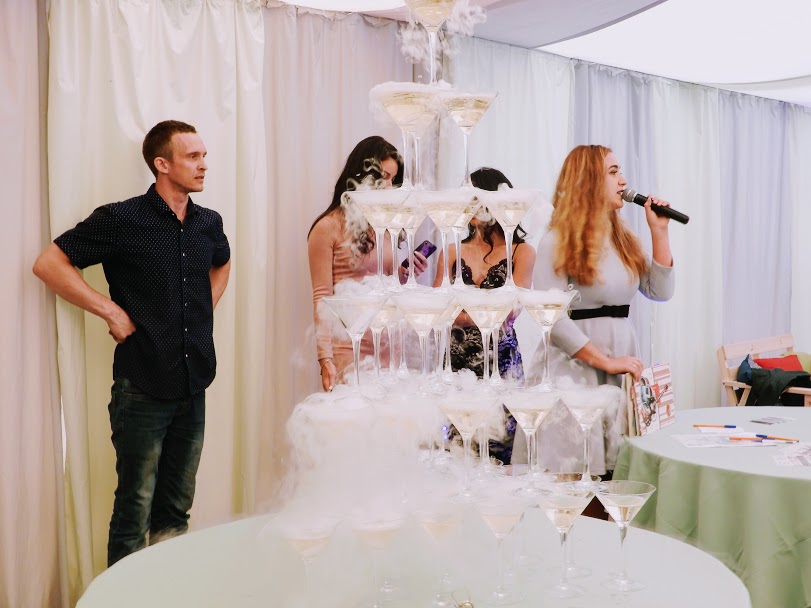 Living it up with Russia’s shrinking “middle class.” Sulphur Island, St. Petersburg, 19 May 2018.  Photo by the Russian Reader

Many people have been citing a 2008 article in Rossiiskaya gazeta.

“By 2020, Russians will be earning an average of $2,700 a month, a family of three will have no less than 100 square meters of living space, and the middle class will constitute over half of the population.”

The article goes on.

“Experts have already dubbed the strategy a ‘breakthrough scenario’ that will see Russia establishing itself as a leading world power by 2020.”

The Economic Development Ministry was wrong, of course, but the experts were right. Russia has already established itself as a world power, albeit in roughly the same sense as North Korea and Iran. It has gone even farther. Iran and North Korea, at least, are not in everyone’s face all the time, while Russia butts in everywhere nowadays.

We should look for the root of the Economic Development Ministry’s mistake in the machinations of Russia’s enemies, of course, although the reason Russia has so many enemies is to be sought in the circumstances that also explain its promotion to the same league as North Korea and Iran.

That is the intriguing dialectic at work here.