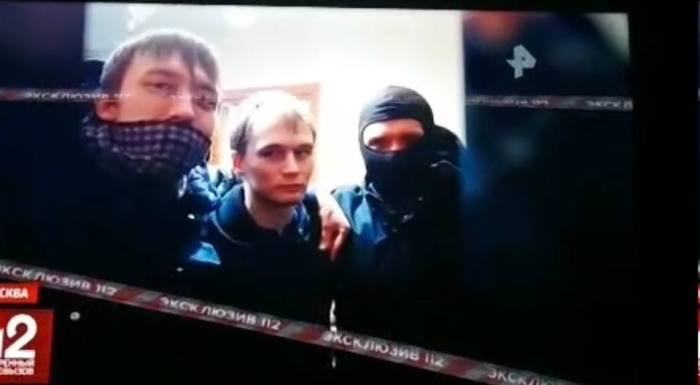 Moscow anarchist Azat Miftakhov at the center of a selfie taken, apparently, by the Center “E” officers who tortured him. Screenshot courtesy of Jenya Kulakova

For a day and a half, lawyers have been unable to see Azat Miftakhov, an anarchist and Moscow State University graduate student who was detained yesterday. Yesterday evening, Miftakhov was taken from the Balashikha police station as a defense counselor looked on and taken to parts unknown. Miftakhov was bruised and surrounded by eight cop. It has been twenty-four hours since he was last seen. No one knows his whereabouts, his condition, and the charges against him.

On the other hand, Ren TV and Rossiya 24 have broadcast photos and videos from the Miftakhov’s search and interrogation. In one of them, an investigator mocks Miftakhov, who is handcuffed, when he claims he is afraid of being tortured. The Center “E” officers take a selfie with their prisoner. (I was unable to find any other photo, so that’s why it illustrates this post.)

The folks who were detained along with Miftakhov, but released yesterday, report they were beaten and tortured with electric shocks. The torture was so bad that yesterday Miftakhov “didn’t look like a human being.” He attempted to slash his wrists to keep from being tortured again. Today, lawyer Svetlana Sidorkina heard an investigator in court talking to someone about it.

The authorities did not produce Miftakhov in court today for his own custody hearing.

Like a year ago in Petersburg, torture is happening practically in broad daylight, but we don’t know what to do.  Yesterday, when I left a message on the Moscow police’s hotline, the operator almost laughed at me. Just as Putin claimed [at a recent meeting of the Council for Civil Society and Human Rights] that FSB officers don’t torture people in vehicles, she doubted what I was saying.

“He’s being tortured right in an Interior Ministry building? Right now? Give me a break,” she said to me.

A missing person report on Miftakhov has been filed, and lawyers have been trying since yesterday to get access to him. But what’s the point?

I hope this hell ends for him as soon as possible.

Here are a few links to articles [in Russian] about what has transpired about the searches and arrests in Moscow since yesterday.