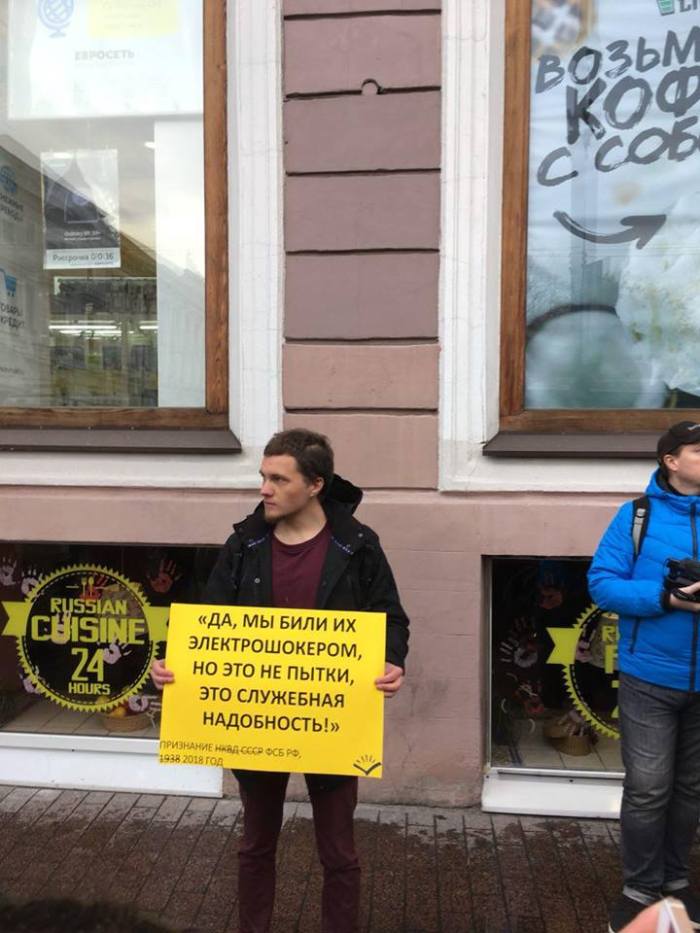 Petersburg democracy activist Pavel Chuprunov, holding a placard that reads, “‘Yes, we tasered them, but it wasn’t torture. We were doing our jobs!’ Admission by the Russian FSB,  2018.” Nevsky Prospect, Petersburg, 28 October 2018. Photo by Yevgenia Litvinova

The day before, I had listened to Yekaterina Kosarevskaya and Yana Teplitskaya’s brilliant but very heavy report about the use of torture in the FSB’s St. Petersburg and Leningrad Region Directorate. In particular, the report recounts how the young men accused in the Network case were tortured. All we can do is constantly talk about these people publicly, about what happened to them over the last year (they were arrested nearly a year ago), and what is happening to them now.

The rally in support of the young folks locked up in remand prisons on trumped-up charges was not approved by the authorities, although the organizers—Open Russia, Vesna, and Bessrochka (Endless Protest)—suggested a variety of venues in the downtown area. Everywhere was off limits.

You can protest in Udelny Park, in the far north of Petersburg, that is, in the woods. It’s a great place to have a stroll and get some fresh air, but who would be there to see your protest? The squirrels? This proposal is better than the garbage dump in Novosyolki, which the authorities always used to suggest as an alternative venue, but it’s not a suitable place for a political rally.

All that remained was the only form of political protest that doesn’t require prior approval from the authorities: solo pickets.

The protesters had different placards, but all of them were quite persuasive. They got to the heart of these frame-ups, which crush and maim people in order to earn promotions for the policemen and security services officers who dream them up.

Solo pickets had always been safe in Petersburg, unlike in Moscow, Krasnodar, and so on. That was why many people found them monotonous and boring.

The plan was to take it in turns to stand holding placards on the corner of Nevsky and Malaya Sadovaya. But the folks from NOD (National Liberation Movement) read announcements for the upcoming protests and got there early. We had to move away from Malaya Sadovaya and closer to the pedestrian underpass to the subway. It’s an uncomfortable, narrow spot.

NOD has been a little sluggish lately. What happened to their weekly vigils? When there’s no money, there’s no NOD. But suddenly they had reappeared, which meant they had been asked to take to the streets by people whose offer you can’t refuse.

Recently, solo pickets have ceased to be “boring,” but there’s no reason for rejoicing. Solo pickets started becoming a staple of news reports around a month ago, when Alexander Beglov was appointed Petersburg’s acting governor. Since then, police have made a habit of detaining people at solo pickets. They make up excuses for their actions on the fly.

I knew this, of course, but I naively counted on logic and common sense winning the day. I compiled and printed out a number of laws proving that I and other “favorites” of Lieutenant Ruslan Sentemov, a senior police inspector in the public order enforcement department of Petersburg’s Central District, had to the right to speak out via solo pickets. I was planning to hand these papers to Sentemov on camera. But I didn’t see him at the rally. I thought he hadn’t come at all. Nor did he see me.

I got lucky. Because what logic had I imagined? What common sense? What laws? What right to hold solo pickets?

Sentemov did see another of his “favorites,” Dmitry Gusev. He pointed at him and said, “Detain him.”

Dmitry was not holding anything at all, much less a placard. He had no plans to be involved in the picketing. But that was that, and now he is detained at a police precinct, like dozens of other people. I counted over thirty detainees. But Alexander Shislov, Petersburg’s human rights ombudsman, writes that around fifty people were detained. Around one hundred people were at the protest.

The detainees were dispersed to different police stations, some of them quite far away. They needed food, water, and toiletries. Police stations usually don’t have any of these things, although they are obliged to provide them if they detain someone for more than three hours.

Over ten people who were present with me at the protest traveled the police stations to check on the detainees. The rest came from the Observers HQ at Open Space. We constantly called and wrote each other, makingsure no one had been left without assistance. I hope that was how it worked out. The detainees should have everything they need for this evening, overnight, and tomorrow morning.

Natalia Voznesenskaya and I had planned to go to the 28th Police Precinct, but all the detainees there had been released.

We went instead to the 7th Precinct. The internet told us it was near the Kirovsky Zavod subway station. We wandered for a long time amidst the nice little houses built after the war, supposedly by German POWs. We arrived at the police station only to find that its number had recently changed. It was no longer the 7th Precinct, but the 31st Precinct.

We went to the real 7th Precinct, on Balkanskaya Street. Elena Grigoryeva, Dmitry Dorokhin, and two other men were detained there. (One of the men had been taken away by ambulance.) Unexpectedly, the 7th Precinct was a decent place. It was no comparison with the 76th and 78th Precincts, in the Central District. The police officers on duty there accepted our food packages and spoke politely with us.

We ran into Alexander Khmelyov at the station. Wielding a power of attorney as a social defender, he had come to see what kind of mattresses and linens had been issued to the detainees. There were no bedbugs. What was more, the police officers brought the detainees supper from a nearby cafe. They were obliged to do it, but their colleagues at other precincts never do it, and detainees usually don’t even get breakfast.

So, now the stomachs of the detainees were full, and they could take the food we had brought with them to court. Court hearings can last eight hours or more, although it happens that fifteen minutes is all the time a judge needs. There is usually no difference. The court’s rulings have been written in advance.

Before leaving the house to go the protest in support of the suspects in the New Greatness and Network cases, I listened to a program on Echo of Moscow about the case of Elena Kerenskaya, sister of Alexander Kerensky, chair of the Provisional Government in 1917. Kerenskaya was executed by the NKVD in Orenburg on February 2, 1938.

I don’t want to blow things out of proportion, but it has become easier and easier to under how the trials of the 1930s happened the way they did.

* Article 20.2 of the Russian Federal Administrative Offenses Code covers “violation[s] of the established procedure for organizing and holding meetings, rallies, demonstrations, marches, and pickets.” Part 2 stipulates punishments for people who organize or hold rallies without notifying the authorities in advance. They can be jailed for up to ten days or fined up to 30,000 rubles (400 euros).