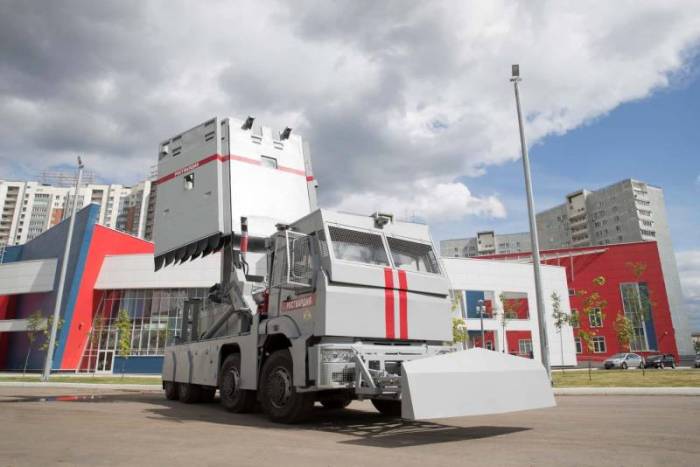 The Wall, one of the Russian National Guard’s new toys for crushing popular unrest. Photo courtesy of Voennoe obozrenie

Gutting the State
“They are crazy!” we wail as we gaze at the regime’s latest stunts.

“What stupidity!” the commentators exclaim in horror as they compile the Kremlin’s list of shame: raising the retirement age; a high-ranking silovik threatening to kill Navalny in a duel; the fiasco of the so-called Salisbury tourists; vote rigging in the Maritime Territory; the Russian fighter plane shot down by the Syrians with our own rocket; the hole in our spaceship, patched up with epoxy; threats to ban use of the US dollar in Russia; more lies about Malaysian Airlines Flight 17; and Navalny’s latest arrest.

The regime’s attempts to rectify its blunders only exacerbate the circumstances, turning them into farces. Did annulling the election in Vladivostok restore people’s faith in elections? Were the elections in Vladimir Region and Khabarovsk Territory not turned into farces when the winners did their level best not to win? And what about the televised interview with the Salisbury tourists? What should we make of attempts to blame Israel for downing the Russian warplane, and the Americans for punching a hole in the Soyuz capsule? The latest act of shooting ourselves in the foot was supplying the Syrians with a S-300 surface-to-air missile system, which is a threat to Israel and, of course, the US. (The Israelis will most certainly respond.)

If we regard all these topsy-turvy achievements as the outcomes of stupidity, the hope emerges that we can fix the stupidity by purging the ranks of officialdom, which is exactly what the Kremlin, in fact, sunk its teeth into today. Actually, what we regard as failure and stupidity have long become the new normal. What we see are the outcomes of a monopoly on political power, which has turned its own replication into an end in itself, and of a negative selection of members of the political elite based on the loyalty principle. In short, a duelist in charge of the Russian National Guard, and poisoners disguised as tourists are the new Russian normal. They are logical and inevitable consequences.

The wailing about a crisis at the top is, therefore, groundless. Russia skipped over the crisis stage. A crisis is a natural turn of events that compels society to look for new solutions and new people to implement them. When this does not happen, society and its superstructures rot. This stinky viscous goo is our current location. Decay prevents collapse: what is rotting cannot collapse. But decay also prevents our country from finding the strength to change.

The ruling class can seemingly take it easy, for the system somehow hobbles along. There are no large-scale protests, and the protests that do occur can either be ignored or quashed, especially since the National Guard has special new crowd-control armored vehicles at its disposal like the Shield, the Storm, the Wall, and so on.

In reality, things have taken a serious turn for Russia. By seeking to ensure its endlessness, the regime has been destroying the Russian state. That is a whole other ballgame. We have reached the point at which the ruling class has been rocking the pillars of statehood, destroying its own guarantee of survival in the bargain.

By outsourcing violence to volunteer oprichniki, the regime has deprived the state of one of its vital attributes: a monopoly on violence. By making Russia a global scarecrow, the regime has undermined the country’s international status and the external habitat in which it dwells. By rejecting strategic planning in favor of tactical maneuvers, the regime has stripped the country of the capacity for progress. By making the Russian state a tool of clan domination, the regime has destabilized the country, since society has been forced to defend its own interests by protesting on the streets.

Finally, by destroying institutions and making the rules of the game relative (there is more than one way to “get things done: in Russia), the regime has plunged the country into a state of lawlessness. When lawlessness ensues, no one is safe from it.

Do the guys in the Kremlin not realize how things will end? Apparently, they do understand, but they are incapable of stopping.

The autocracy survived in 1991 by scrapping the Soviet state. The autocracy has now been trying to survive by turning the post-Soviet Russian state into a lip-synched song about superpowerdom.

Lilia Shevtsova is a well-known Russian political scientist. Translated by the Russian Reader 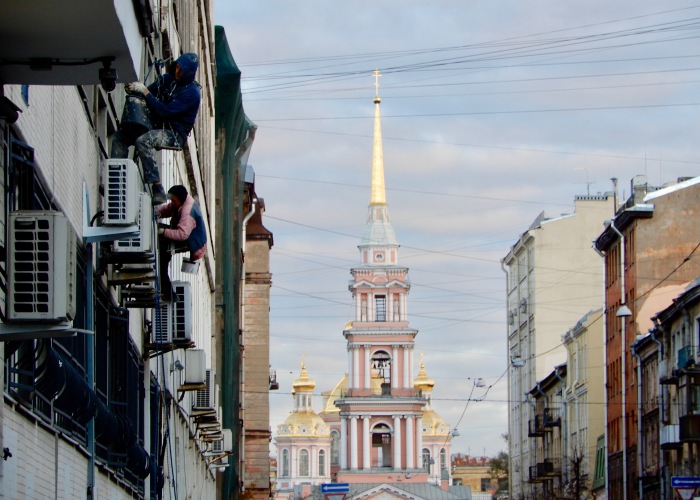 Saints Cyrill and Methodius Church on Ligovsky Avenue in Petersburg, as seen from the end of Tyushin Street, 27 October 2018. Photo by the Russian Reader

How do you become a “Russia expert” on Facebook in a matter of weeks?

Method No. 1: Claim “the Russians” are behind literally everything untoward that happens in the world, from attempted piped bombings in the United States to typhoons in the South Pacific.

How does this method work?

First, never provide any hard evidence of this alleged “Russian” influence. Refer vaguely but insistently to allegedly irrefutable research—done by someone else, of course—on how social networks can be used to disseminate fake news and crackpot theories.

Second, don’t learn Russian or spend any time in Russia.

In fact, it helps a lot if you know as little as possible about Russians and Russia, because knowing something would needlessly complicate your ambition to have yourself deemed a “Russia expert” on Facebook.

Finally and most important, if someone calls you on the carpet for your glaring lack of evidence and knowledge, and the spurious logic of your arguments, accuse the person of being “rude and aggressive” and immediately unfriend them. You can’t afford to have someone who actually knows something about Russia and Russians or can even just ask a decent question that throws a less than glowing light on your dicey arguments and made-up facts hanging round bothering you and your devoted virtual fans, for you have a higher calling.