“Down with death.” Photo by the Russian Reader

No longer mourn for me when I am dead
Then you shall hear the surly sullen bell
Give warning to the world that I am fled
From this vile world, with vilest worms to dwell:
Nay, if you read this line, remember not
The hand that writ it; for I love you so
That I in your sweet thoughts would be forgot
If thinking on me then should make you woe.
O, if, I say, you look upon this verse
When I perhaps compounded am with clay,
Do not so much as my poor name rehearse.
But let your love even with my life decay,
Lest the wise world should look into your moan
And mock you with me after I am gone.

Dmitry Medvedev, then President of Russia, and Varsonofius, then Metropolitan of Saransk, during National Unity Day in 2011. Photo courtesy of Wikimedia Commons

Petersburg city hall [aka the Smolny] has allocated two land plots for church construction in the Primorsky and Petrograd distrists. According to documents published on the Smolny’s website, the land will be provided free of charge. It was reported previously that the Russian Orthodox Church (ROC) had announced plans to build a Sunday school on Heroes Avenue and a church on Konstantinovsky Avenue.

The St. Petersburg Diocese of the Moscow Patriarchate will receive a land plot on Krestovsky Island. The total area is 2,000 square meters. A ten-year lease will be signed within a month.

The proposal to transfer the land to the ROC was made by Petersburg Deputy Governor Igor Albin at a meeting of the city government.

The estimated cadastral value of the land is ₽15 million. According to Anna Sigalova, deputy director for investments at Colliers International in Petersburg, the plot could be sold for around ₽300 million [approx. €4 million]. The analyst added the price could change if the plot were rezoned for residentialhousing construction.

In addition, the ROC will receive a land plot in the Krasnoye Selo District for free. This is the previously mentioned plot on Heroes Avenue. The total area of the site is 2,200 square meters.

The ROC plans to build a two-storey Orthodox school with its own church on the site. The work will be done by the congregation of the All Saints Church in southwest Petersburg. The term of the free lease is ten years. Petersburg Governor Georgy Poltavchenko signed the documents ceding the land to the ROC.

On July 18, we reported the Petersburg and Leningrad Region Arbitrage Court had agreed to hear a lawsuit filed by the city’s Property Relations Committee (KIO) against the congregration of the Intercession of the Blessed Virgin Church (St. Petersburg Diocese, ROC) concerning the ownership rights to the church, which was built on the former grounds of South Primorsky Park, opposite the house at 24 Valor Street. 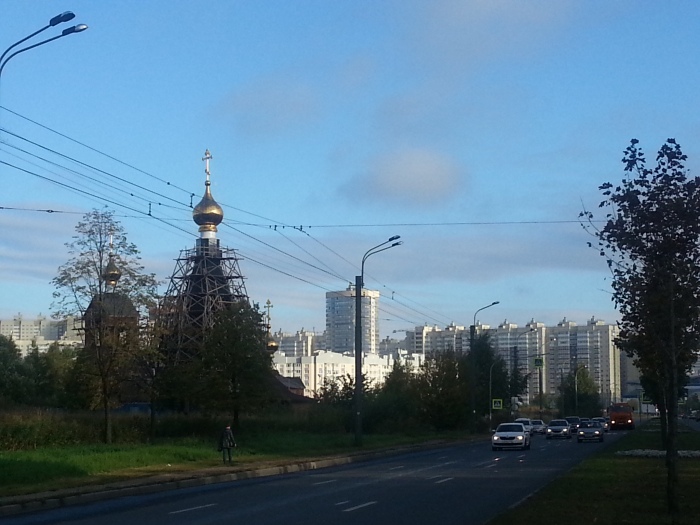 Intercession of the Blessed Virgin Church while still under construction in September 2015. Photo courtesy of the church’s website

The 16,600 square meter plot had earlier been rezoned for construction of religious buildings and handed over to the ROC. The church building itself, however, was constructed. without the necessary permits. The first hearing of the lawsuit, which claims the city’s right of ownership to the church in the park, has been scheduled for September.

In July 2017, the Smolny transfered a nearly 5,000 square meter plot of land in the elite [sic] village of Komarovo to the ROC. The media wrote at the time the summer cottage of Varsonofius, Metropolitan of St. Petersburg and Ladoga, could be built on the site. At the same time, Petersburg Legislative Assembly member Boris Vishnevsky drew attention to the fact that a nearly half-hectare land plot was transferred to the Petersburg Diocese only due to the house on it.

In 2013, the ROC leased the land until 2062. The plot’s value was estimated at ₽30 million. Later, officials explained why they had decided to transfer it to the ROC.

“The plot contains a piece of real estate, a house whose cadastral number is 78:38:0022359:29, and whose rightful owner is a religious organization [i.e., the ROC],” said Petersburg Deputy Governor Mikhail Mokretsov.

According to Mokretsov, an inspection established the plot was used for religious purposes. The Smolny leased the plot to the St. Petersburg Diocese on July 25, 2017.