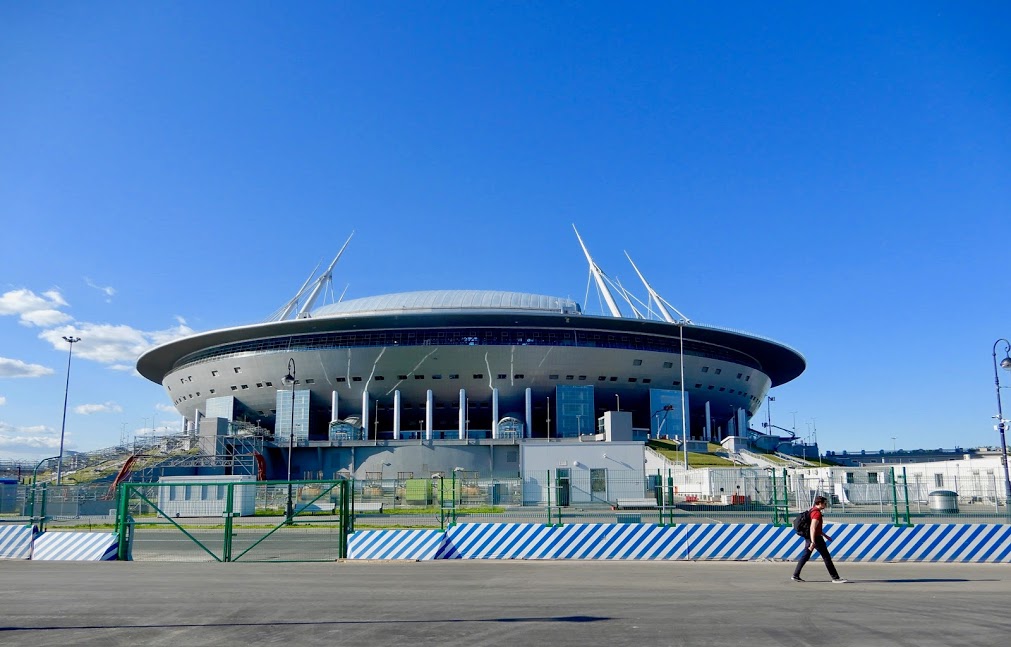 The members of the wholly mythical terrorist organization the Network have been accused by the FSB of planning to disrupt the March presidential elections and this summer’s World Cup in order to foment rebellion among the hoi polloi. These accusations would be hilarious if they were not served up with heavy helpings of torture, intimidation, and incarceration. Photo of Krestovsky Stadium in Petersburg, a World Cup venue, by the Russian Reader

Mikhail Kulkov and Maxim Ivankin, two suspects in the so-called Network Case, have been detained and placed in police custody, OVD Info has learned from Yelena Bogatova, the mother of Ilya Shakursky, another suspect in the case.

The Lenin District Court in Penza has remanded Kulkov and Ivankin in custody until September.

Bogatova had been waiting for a lawyer outside the Penza Remand Prison when Ivankin and Kulkov were brought there. According to her, their parents learned of their arrests on July 4. Their custody hearings took place at 2 p.m. on July 5.

Alexei Kulkov, Mikhail Kulkov’s father, told OVD Info the young men had been detained in Moscow without IDs. Penza’s Lenin District Court has remanded them in custody until September 18. Mr. Kulkov reported that his son and Maxim Kulkin have been charged with organizing a “terrorist community.”  He said he saw the two young men for several minutes in the courthouse as they were escorted down the hallway. He noticed they had black eyes and bruises on their bodies.

Previously, Ivankin and Kulkov were detained in Penza in March 2017 along with antifascist Alexei Poltavets. They were initially charged with drugs possession. According to Poltavets, after they were detained, Russian Federal Security Service (FSB) officers tortured and beat them, demanding they testify against their friends in the antifascist scene. Poltavets later left Russia and had not seen Ivankin and Kulkov since then.

In June 2018, it transpired that Ivankin and Kulkov’s case had been combined with the investigation of the so-called Network, an organization that FSB investigators claim is a terrorist group. Ivankin and Kulkov have been charged with planning to produce or sell drugs in large quantities (Russian Criminal Code Article 228.1 Part 4 Paragraph G and Article 30 Part 3).

In the criminal case files, Ivankin, Kulkov, and Poltavets are identified both by their real names and the pseudonyms Redhead, Ilya, and Boris.

It transpired on July 4 that another suspect in the Network Case, Dmitry Pchelintsev, had been transferred from Penza Remand Prison No. 1, most likely to St. Petersburg.

On May 23, a friend of the accused, Victoria Frolova, was detained at the Russian-Ukrainian border. She was forced to testify against her Penza friends, including Ivankin and Kulkov. In her signed statement, Ivankin and Kulkov are identified as members of the 5.11 (“November Fifth”) cell of the Network. According to FSB investigators, all members of the Network trained with sticks in the woods, practice orienteering and first aid, and learned to set traps.

In the autumn of 2017, five young men were arrested in Penza: Yegor Zorin, Ilya Shakursky, Dmitry Pchelintsev, Vasily Kuksov, and Andrei Chernov. Arman Sagynbayev was detained in St. Petersburg and extradited to Penza. All of them were charged with involvement in a “terrorist” community. The FSB claimed the young young were involved in a terrorist organization known as the Network, whose cells, allegedly, existed in Moscow, Petersburg, Penza, and Belarus. The accused men gave accounts of mental coercion, electrical shock torture, and being hung upside down by FSB officers, as well as their planting weapons in the men’s cars and flats.

Later, several of the suspects renounced their confessions, saying they had been given under torture.

Besides the six suspects jailed in Penza, there are three more young men who have been charged with involvedment in the Network who have been remanded in custody in Petersburg. They are Viktor Filinkov and Igor Shishkin, on whose bodies human rights activists found physical traces of their having been tortured, and Yuli Boyarshinov, originally accused of illegal possession of explosive substances. Later, investigators tried to force him to testifying against the men accused in the Network Case and charged him with the same offenses.

If you have not been following the Penza-Petersburg “terrorism” case and other recent cases involving frame-ups, torture, and violent intimidation by the Russian Federal Security Service (FSB) and other arms of the Russian police state, read and republish the recent articles the Russian Reader has posted on these subjects.