David Frenkel, a Mediazona correspondent, has informed us that bailiffs at Petersburg’s Dzerzhinsky District Court have cited him for violating Article 17.3 of the Administrative Code (“failure to comply with the orders of a judge or court bailiff”).

Frenkel attended the custody extension hearing of Penza-Petersburg “terrorism” case suspect Viktor Filinkov. Journalists and the public were not admitted to the courtroom during the hearing and the judge’s ruling. When the hearing was over, and Filinkov was escorted from the courtroom, the public, around forty people, applauded him.

It was then that court clerk Yelena Krasotkina, outraged the public supported the prisoner, ordered the bailiffs to detain Frenkel, who at the time was standing in the corridor and not applauding.

Yekaterina Kosarevskya, a member of the Petersburg Public Monitoring Commission, said she heard Krasotkina say to the bailiffs, “Write somebody up for something.”

One of the bailiffs suggested detaining Frenkel. Ten minutes later, another bailiff threatened to detain Kosarevskaya.

When the bailiffs detained Frenkel, they broke his glasses. They claimed he screamed.

The bailiffs cited him Frenkel for violating Adminstrative Code Article 17.3 Part 2 (“Failure to obey the lawful request of a court bailiff for establishing order in the court and stopping actions violating court rules”).

Frenkel sent a photo of the citation to his Mediazona colleagues: he was unable to read it, since a bailiff, surnamed Vikulov, had broken his glasses. The citation claimed Frenkel “made noise, clapped, shouted, and urged the crowd to take illegal actions.”

Frenkel was then taken to the 78th Police Precinct. The policemen swore when they found out why Frenkel had been brought to the police station. He was released after approximately fifteen minutes. 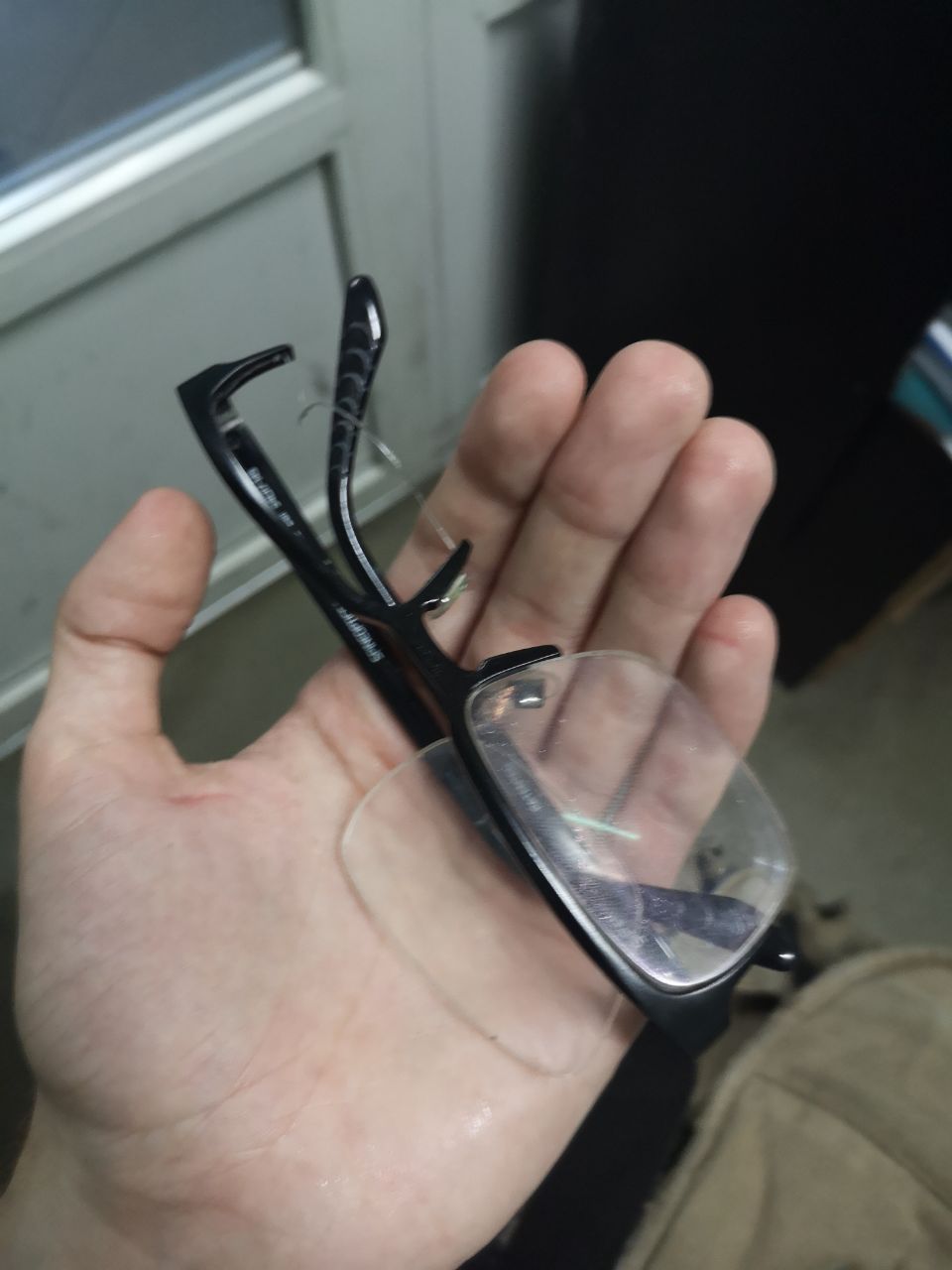 When Frenkel was escorted from the corridor, it transpired the bailiffs had run out of blank arrest sheets.

Around forty people had gathered before the hearing in the second-floor corridor of the courthouse. They included the parents of Yuli Boyarshinov, another suspect in the Penza-Petersburg “terrorism” case, whose remand to police custody was extended later in the day. No member of the public was able to attend the hearing. Before escorting Filinkov from the holding cell, the guards and bailiffs ordered the public to go down to the first floor. They claimed their request had to do with “safely escorting” their prisoner.

The members of the public were reluctant to leave the second floor. Court clerk Yelena Krasotkina emerged from the office of the Dzerzhinsky District Court’s presiding judge. Krasotkina announced the decision to hold both hearings in closed chambers had been made earlier and ordered the public to leave the courthouse. 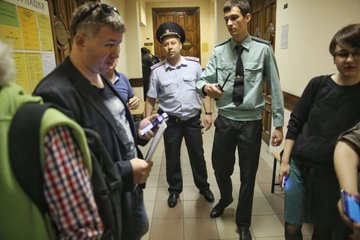 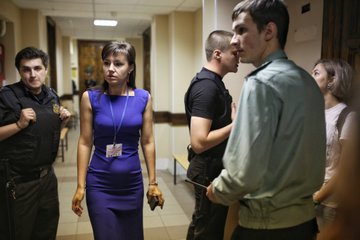 David Frenkel (@merr1k): “I get the sense the brass has taken the Dzerzhinsky District Court to task, and so they are avoiding the use of force. They are swearing and getting mad, but they’re putting up with us. 11: 12 a.m., July 19, 2018.”

The bailiffs placed a bench at the entrance of the corridor to courtroom, forbidding members of the public from going around the bench. Krasotkina reprimanded the bailiffs, complaining , “They’re all still here,” meaning the members of the public. Armed guards in masks escorted Filinkov into the courtroom as this was happening. 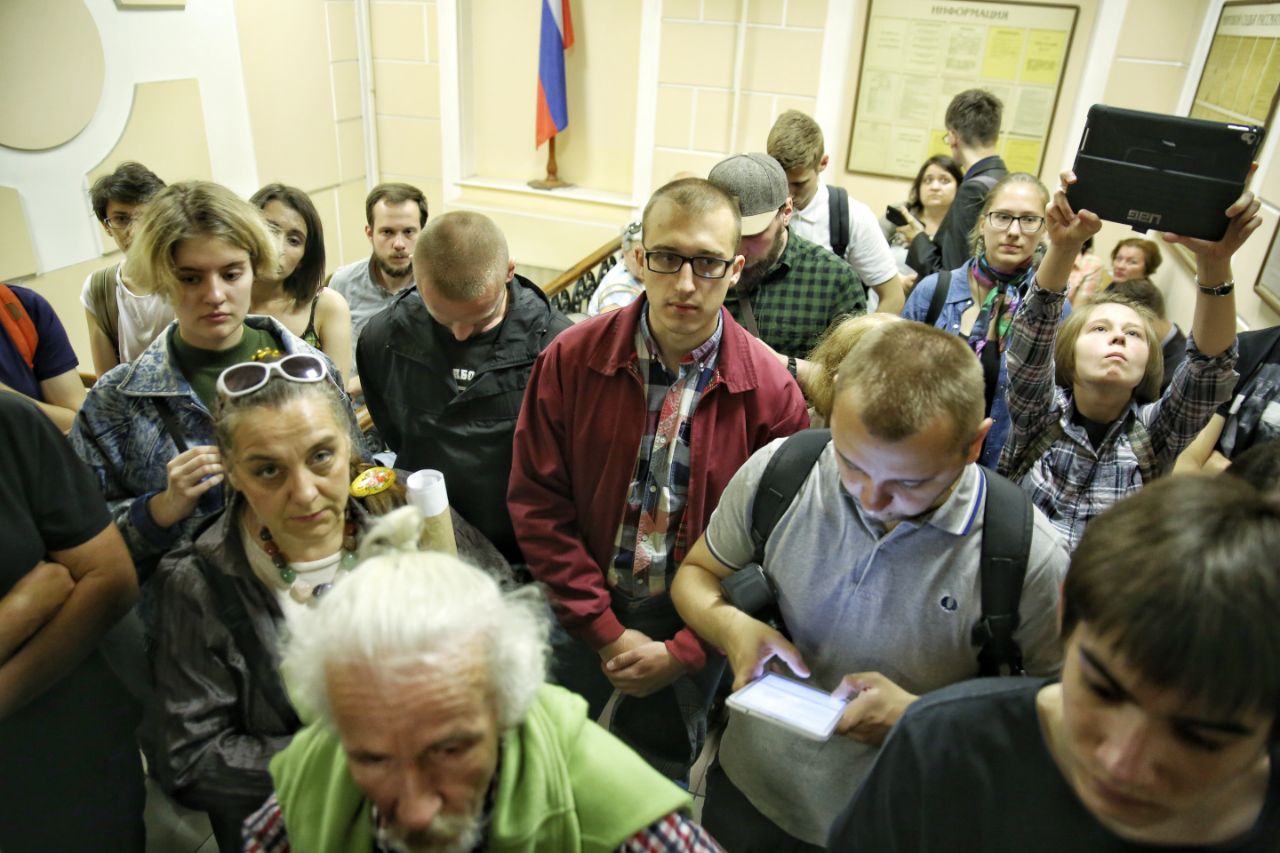 Inside the Dzerzhinsky District Court, June 19, 2018. Photo by David Frenkel. Courtesy of Mediazona

Members of the public and the bailiffs argued with each other. A man who was possibly in charge of the armed guard joined them. He warned the public they would not be admitted to the courtroom to hear the judge’s ruling in the cases of Filinkov and Boyarshinov.

“How is that?” asked a member of the public.

“Well, if the judge permits it, the public gets in. If the judge doesn’t, they don’t,” replied the man.

“How do we find that out?” asked perplexed members of the public.

“When the hearing is over, they’ll come out and tell you,” he concluded.

Krasotkina periodically emerged from the presiding judge’s office, taking a photograph of the members of the public on one such occasion.

Filinkov’s defense counsel, Vitaly Cherkasov, a lawyer with the Agora International Human Rights Group, then emerged from the courtroom, telling the crowd the defense had asked the judge to transfer Filinkov to house arrest.

Finally, after the court had rendered its ruling, Frenkel was detained by the bailiffs. 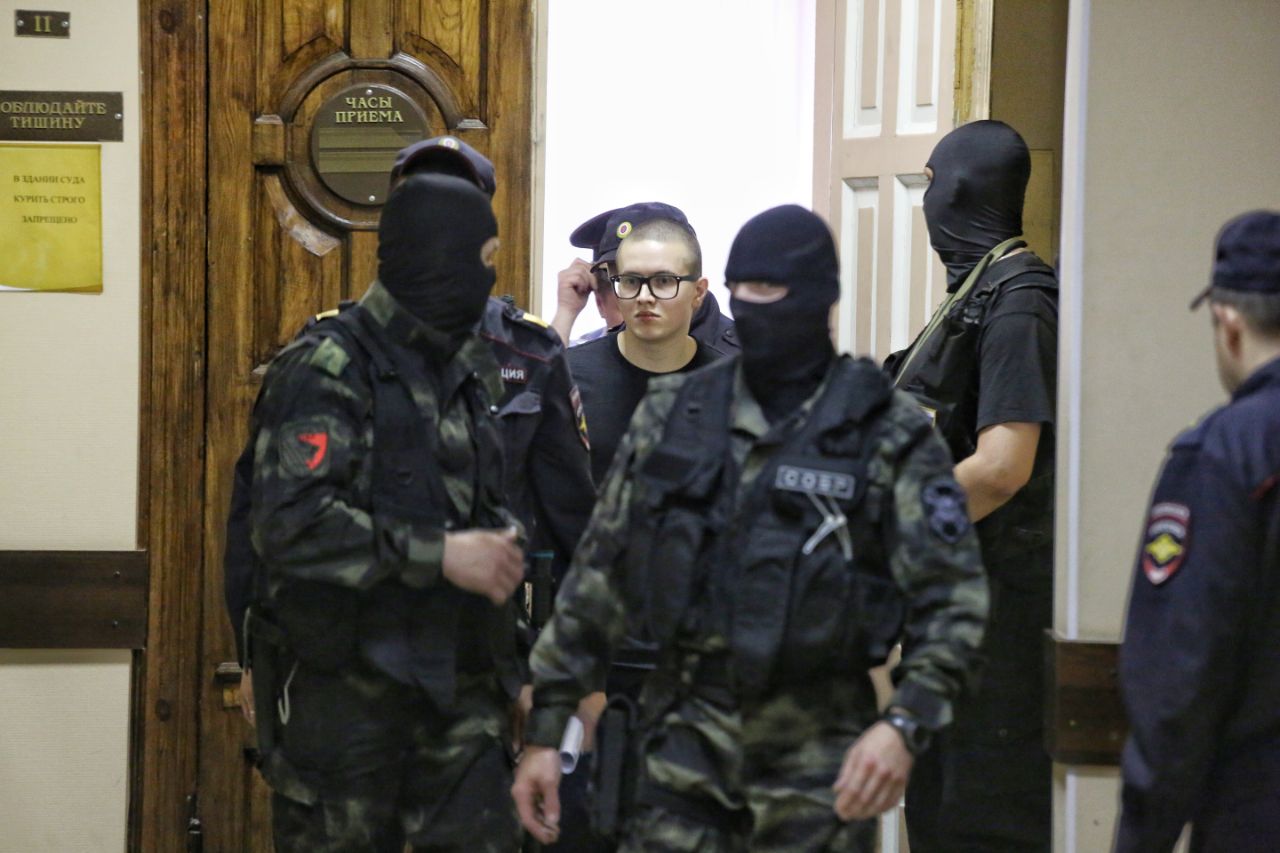 This was not the first time a member of the press has been cited for violating Article 17.3 at the Dzerzhinsky District Court. On March 22, 2018, bailiff Ivan Lozovsky cited journalist Sasha Bogino for violating the administrative law. He ordered her to stop “live streaming,” although the Mediazona correspondent was sitting in the courtroom with her laptop open and not filming anything. In late May, a court ordered Bogino to pay a fine of 500 rubles.

Filinkov and Boyarshinov have been in police custody since January of this year. On June 18, 2018, the Dzherzhinsky District court extended the term in custody of the third Petersburg suspect in the Penza-Petersburg “terrorism” case, Igor Shishkin. Another six young men are in police custody in Penza as suspects in the same case.

According to the Russian Federal Security Service (FSB), the members of the alleged “terrorist community” known as “The Network” had planned “to stir up the popular masses in order to destabilize the political circumstances” in Russia on the eve of March’s presidential election and the 2018 FIFA World Cup, which is currently underway. In addition, on June 15, 2018, it transpired that three new charges had been added to the case.

Three of the suspects, who have been charged with violating Article 205.4 of the Russian Criminal Code (“involvement in a terrorist community”), Viktor Filinkov, Ilya Shakursky, and Dmitry Pchelintsev, have claimed they were tortured into confessing after they were detained by FSB field officers. In addition, Alexei Poltavets, an acquaintance of the suspects, has claimed he was tortured into testifying against them.

The Russian Investigative Committee has so far refused to refuse to file abuse of authority charges against any FSB officers. In the case of Ilya Kapustin, who was tortured during his interrogation by the FSB as a witness, the Investigative Committee decided Kapustin’s taser burns were “consistent with injuries caused by skin diseases or insect bites.”

The suspects’ loved ones have formed a Parents Network. In April 2018, the group held a press conference in Moscow.

*This text is not an objective reflection of the “hearing.” Rather, I see its value as therapeutic in the light of what happened today.

This was my second time at a remand extension hearing for Viktor Filinkov.

There were more people, and their voices were louder. But I still left feeling as if I had been hit with a shovel, which was no surprise.

This time round, the court bailiffs immediately herded everyone down to the first floor, but they were unable to drive anyone completely out of the courthouse.

People stood near the stairway.

Our way down the long corridor was blocked by three beefy bailiffs, who were the centerpiece of a genuine commedia dell’arte.

At first, they used a bench to block the way into the corridor. Folks sat down on the bench. Then they decided to remove the bench. One young woman, however, refused to get up, and the three muscleheads threatened to drag her forcibly from the bench. They left the bench where it was, but turned it around. I managed to squeeze through and sit down on it.

Folks were pushing from one side, as during rush hour in the subway, while on the other side an amphitheater opened up. Knights in bulletproof vests outfitted with tons of pockets stood in this amphitheater. They were nearly motionless, like the best sitters during life drawing classes at the Academy of Arts.

I tried to make a stupid joke that snuggling up against young women like that, not letting them walk down the corridor, was the only joy in their dull jobs. A tall, thin bailiff (I had sketched him at the previous hearing) kept running back and forth, trying to cuddle up to T., pushing his more broad-shouldered colleague away from her.

The broad-shouldered bailiff, who bore a resemblance to Ramzan Kadyrov, smiled reservedly when I joked, while the other bailiff (I memorized his name: Anton) went so far as to say it was not their choice to wear the bulletproof vests, but they were under orders to wear them. He kept pulling at the neck of his t-shirt, as if he wanted to tear off his entie sweaty get-up.

But my jokes and attempts to see something human about them collapsed when all of them went after reporter David Frenkel, elbowing their way through the crowd. We tried to squeeze past them, but they had the right to employ violence. I sensed the tension in their elbows. But if someone like me had tensed their elbows like that, they would have been charged with “disobeying” officers of the law. It was scary.

Amid the stuffiness of the corridor, a ball consisting of the swearing gorillas and skinny David rolled down the stairway. (It transpired later the brave young men broke David’s glasses.)

The crowd seethed with despair and resentment.

“Look at yourselves! How you behave! You are violating the right of citizens to exercise their right to . . . ,” a female court clerk in a blue dress kept repeating at us.

“I have every grounds!”

The bits of bureaucratese clawed at each other. Words stumbled and snapped, turning into feckless curses.

“What grounds do you have for kicking us out?”

“I have every grounds!”

“Whose locum? What’s your name?”

“I’ve already told you everything!”

This had all happened somewhere before, either in a story by Kafka or during my schooldays.

Ultimately, I really resent the fact I cannot draw Viktor or Yuli Boyarshinov or the lively crowd, constantly in motion, but am forced to draw the faces of the bailiffs, frozen in the stupid frenzy of their work. Violence is such a habitual part of their work they have ceased noticing it.

I would rather not have the opportunity to draw them. I would rather this hearing had not taken place. I would like to have magical powers and make it all go away. I would snap my fingers and, instead of a court bailiff, a marvelous violinist would be standing there or a waste recycling engineer who was a feminist and vegan to boot.

But, alas, the bailiffs pushed us back by another ten centimeters, and Ninja Turtles in balaclavas escorted Viktor into the courtroom. Our only magical powers were yelling and clapping as loudly as we could.

Like last time, I could not take it anymore. I left before the hearing was over. Where can I find the strength to endure this?

Drawings by Anna Tereshkina. I thank Ms. Tereshkina  for her kind permission to reproduce them here as well as publish a translation of the accompanying text.  All images © Anna Tereshkina, 2018. Translated by the Russian Reader.