Sure, babies are cute, but when they are born in Russia they have every chance of growing up to be “terrorists” and “extremists.” At least, that is how they are regarded by the Kremlin and its fascist guard dogs at the Russian Federal Security Service (FSB). Photo courtesy of New Kids Center

It’s amusing (actually, it’s disgusting) how much the former Soviet socialist republic known as the Russian Federation has been overtaken by bourgeois baby madness, while at the very same time conditions for raising children in a decent, safe place have been deteriorating by the minute in Russia.

Why would anyone in their right mind want to have a kid in a country where the country’s top law enforcement agency, the Federal Security Service (FSB) reserves the right to destroy a young person’s life because its officers are stupid thugs incapable of distinguishing actual terrorists from gifted young chemists?

This brings me to another, related point that has bothered me for a long time.

Former FSB officer Alexander Litvinenko, who was executed by Russian dictator Vladimir Putin in the most excruciating way possible for his alleged “treason,” is invariably referred to as a “spy” by the remarkably gullible Anglophone press. But Litvinenko was never a spy. He was an FSB officer whose bailiwick was combating organized crime. When he realized, in the late 1990s, that his own law enforcement agency had become as criminal and corrupt as the gangsters it was supposedly combating, he first tried to bring it to the Russian public’s attention.

Do you remember the heavily covered press conference where he spoke about these problems (including the fact he had been ordered to assassinate Boris Berezovsky), his face masked by a balaclava, along with several of his FSB colleagues?

When Litvinenko realized, however, that nothing would come of his campaign, and his life was in danger, he defected to Great Britain.

God knows that Mr. Litvinenko was probably a naïve man albeit a brave and honest one. I wish the same could be said of most of his fellow countrymen, who are crazy about babies but won’t rub two fingers together to make their country a place where young people are regarded as anything other than potential “terrorists” and “extremists.”

You don’t believe me? Then read this little horrorshow for good measure. // TRR

Petersburg’s Krasnoye Selo District Court has extended the arrest of Yuli Boyarshinov, a 26-year-old industrial climber charged with involvement in The Network, an alleged “terrorist community.” The accused’s parents, who took the stand as witnesses during the court hearing, were grilled about their son’s vices, job, and hobbies. After listening to their account of a loving son whose health has suffered while he had been imprisoned in Remand Prison No. 6 in Gorelovo, the court remanded Boyarshinov in custody for another two months, until June 22.

Open and Closed
Boyarshinov’s custody hearing was held in open chambers for ten minutes or so, before the court granted the police investigator’s motion to hear the case in closed chambers. Two reporters and a member of the Human Rights Council, who had been admitted into the courtroom, had to go back out into the corridor, where the other thirty people who had attempted to attend the hearing and had not been admitted to the courtroom were writing complaints about their not having been admitted. 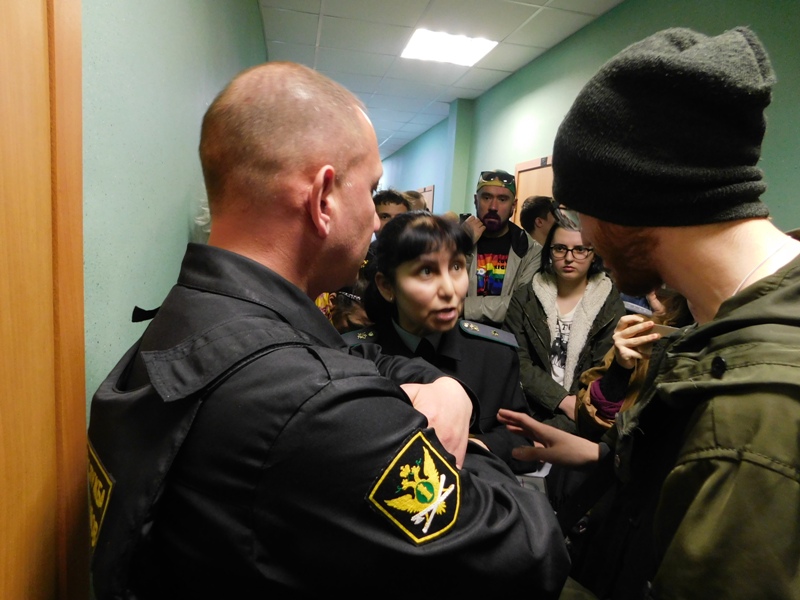 Court bailiffs stood in front of the closed courtroom door, apparently defending it from attack by the indignant crowd. When asked by reporters why they were not being allowed in the courtroom, their only replies were “No comment” and “Don’t provoke us.”

However, even the reporters admitted into the courtroom found it hard to sit down. For the latest hearing in the high-profile “case of the antifascists” the authorities chose a tiny room with a single bench for the public that, in fact, could accommodate no more than three people.

Soon after the hearing was closed to the public and reporters, the accused man’s father and mother, Nikolai Boyarshinov and Tatyana Kopylova, were summoned one after the other into the courtroom to give testimony.

When he exited the courtroom, Boyarshinov’s father, barely holding back his tears, talked to reporters.

“I told the court I knew my son well and was certain not only he had not done anything bad but also had not planned to do anything bad. There were questions about his vices. I said he had never drunk or smoked. There were questions about his job. I said Yuli had a steady job, and thanks to it we made ends meet. My wife and I are artists, and lately we have had hardly any commissions. He took care of us,” said Nikolai Boyashinov. 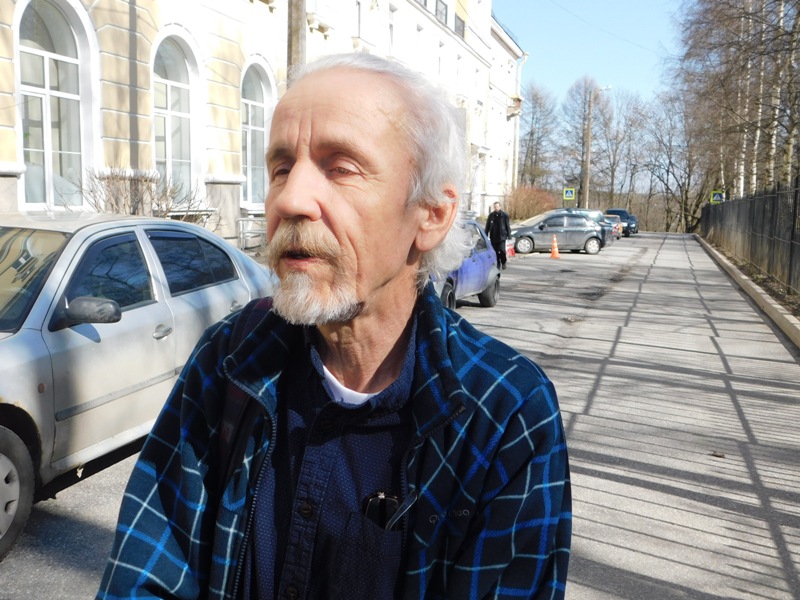 After reporters finished talking with him, two friends of his son approached Nikolai Boyarshinov.

“We are really glad to meet you. Hang in there. Everything will be fine,” they told Boyarshinov’s father.

“You know, I’m now often asked about Yuli’s friends, but I’m sure he wouldn’t bother handing out with bad people. If he is friends with people, they’re good people,” Nikolai Boyarshinov said to them.

When she exited the courtroom, Tatyana Kopylova reported that she had been asked similar questions.

“I was asked about his hobbies. I said he enjoyed traveling and reading. I was asked about his job. I said he was an industrial climber and he had been helping us out a lot. I also said my mother’s heart could not stand this worry. The press has informed me that some guys named Kostik, Dima, and Gennady Belyayev had been visiting him and threatening him. [Ms. Kopylova means an article in Novaya Gazeta in which it had been reported Boyarshinov had been visited by FSB officers who threatened him—Editor.] When I go to sleep I think about how Yuli’s night will pass. Why have these people been intimidating Yuli? As it is, the remand prison in Gorelovo is a torture chamber and a cesspool, where all the regulations are violated,” said Tatyana Kopylova.

According to her, Boyarshinov was being deliberately held in poor conditions to extort him into testifying. She also added the cells in Remand Prison No. 6 were so overcrowded her son had had to sleep on the floor, and when he had caught cold he did not receive proper medical treatment.

New Charges
Yuli Boyarshinov was apprehended on January 21, 2018, several days earlier than the other two Petersburgers accused of involvement in The Network, Viktor Filinkov and Igor Shishkin. However, Boyarshinov was initially charged only with illegal possession of explosives (Article 222.1 Part 1 of the Russian Federal Criminal Code): police found 400 grams of smoke powder, ordinarily employed in the production of fireworks, in the young man’s backpack during a random ID check. He was charged with involvement in a terrorist community (Article 205.4 Part 2 of the Russian Federal Criminal Code) only on April 11, 2018.

The particulars of the new charge are unknown: Boyarshinov’s defense attorney, Olga Krivonos, has signed a nondisclosure agreement regarding the preliminary investigation. The other young men caught up in the case, including Filinkov and witness Ilya Kapustin, have alleged they were tortured into testifying. Members of the Public Monitoring Commission also reported bruises, a fracture, and burns on Igor Shishkin’s body.

Shoot to Kill
After the court issued its ruling, Boyarshinov was escorted into the corridor, where Ms. Kopylova turned to the court bailiff maintaining order there.

“I haven’t seen my son or heard his voice for three months. Could I go up to him and give him a quick hug?” she asked.

The bailiff did not bother with procedural subtleties.

“We’ll open fire and shoot to kill,” he replied.

Twenty minutes later, the prisoner escort guards made the exact same threats to the accused’s friends, who had gathered in the yard of the courthouse to see their comrade one more time. A police escort guard officer did not like the fact some of the young people had cameras. On several occasions he announced either that everyone was too close to the police truck or he could see the people who had gathered were hiding next to the courtroom’s porch. For these offenses, he claimed he was willing to resort to the harshest measures, but push did not come to shove.

His friends greeted Yuli Boyarshinov with a round of applause. He was able to flash them a smile before he was put into the paddy wagon for the trip back to the remand prison. 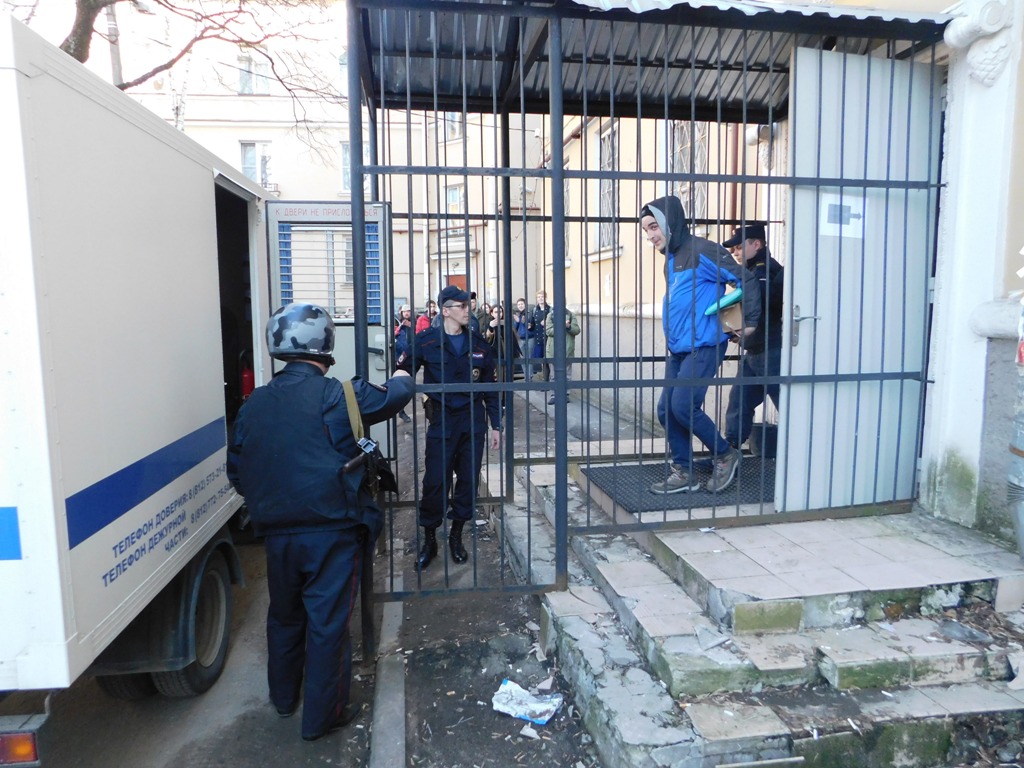 P.S. As Boyarshinov’s custody extension hearing was underway in Krasnoye Selo, police were searching the flat once occupied by Ilya Kapustin in the city’s Central District. Interrogated as a witness in The Network case, Kapustin alleged he had been tortured and applied for political asylum in Finland.

All photos by Sergei Yeremeyev. Thanks to Nastia Nek for the heads-up. Translated by the Russian Reader