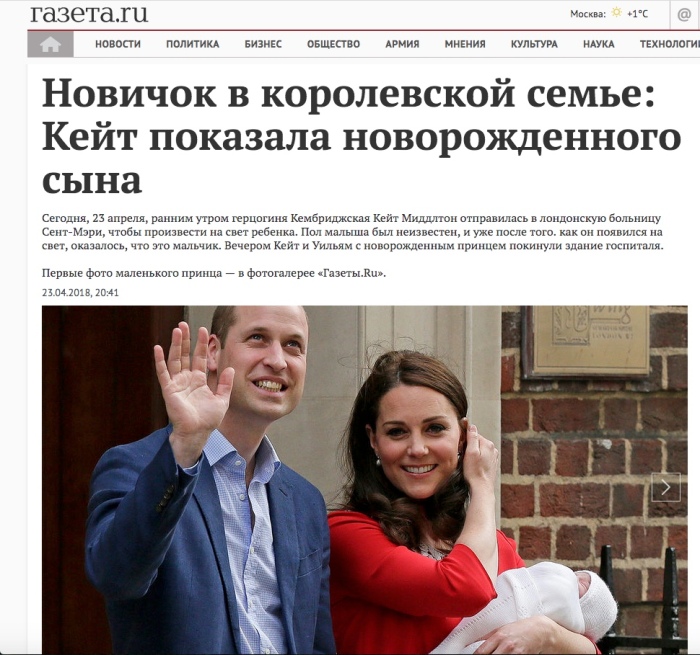 The headline in Gazeta.Ru, once upon a time a thoroughly respectable, pioneering Russian online newspaper, reads, “Novice [novichok] in the royal family: Kate shows off newborn son.” Per his commentary, below, Crimean Tatar journalist Adyer Muzhdabaev is surely right that Gazeta.ru‘s headline writer was clearly referring to the Novichok nerve agent, recently used to poison Russian defector Sergei Skripal and his daughter Yulia, because newborn babies are not generally identified as “novices” [novichki] in Russian. Screen shoot from Gazeta.ru taken by the Russian Reader.

The killers are having a laugh. The inhabitants of the Russian Reich think like criminals. They are hardcore reprobates and utterly degraded. Reporters head this pack of Homo erectus. I stopped being surprised a long time ago, and this does not surprise me at all. It makes sense. The Reich must be impeccable. Nearly everyone in it ceases to be a human being sooner or later, and this process has almost been consummated in the Russian Reich.

While I would disagree vigorously with Mr. Muzhdabaev’s sweeping conclusions about the “inhabitants of the Russian Reich” (nearly the entirely purpose of this website is to reveal the existence of an anti-Putinist Russia and non-Putinist Russia to the outside world and prove these other Russias are far larger than the pro-regime Russian and western media would lead you think) and remind him that, under international law, there is no such thing as collective guilt (and, thus, collective punishment has been deemed illegal), it is quite true the Putin regime and its running dogs in the mainstream Russian media have been working overtime these past eighteen years to muddle, “nazify,” and render utterly cynical the minds of Russia’s media consumers, who are in no way seen as “citizens” with free wills and their own, perhaps dissenting viewpoints by the Kremlin and its media lackeys, but precisely as mindless consumers of disinformation, agitprop, and unfiltered hate speech who will believe anything you tell them, even if the thing you tell them today directly gainsays what you told them yesterday.

For example, anyone on the ground here in Russia would have been hard pressed not to notice the sheer amount of schoolyard racism directed at President Obama by the Russian press, certain Russian politicians, and grassroots enthusiasts of the regime and its methods for degrading the Russian mind.

Yet, during nearly his entire eight years in office, Obama and the country he led were invariably identified as “our partners” by President Putin, other leading Russian politicians, news presenters, and the emcees of political TV talk shows. It was another thing that this phrase, “our partners,” was almost always uttered with a knowing, cynical wink or slight, sinister smile, a signal to the home viewers that meant, “You and I, dear viewers, are not so stupid to really imagine they are really our partners. We know we hate them (or should hate them) with a burning passion, but we have to keep our cards hidden from those louts until it is too late for them to do anything about it.” // TRR