An artist is defined by the context in which people find him interesting and appreciate his work. This is not a new idea, but it is no less true for all that.

A native of the Belarusian shtetl Beshenkovichi, Leningrad graphic artist Solomon Yudovin (1892–1954) has not been forgotten, exactly, but nor is he widely known, and all because his oeure occupies several nonoverlapping contexts. 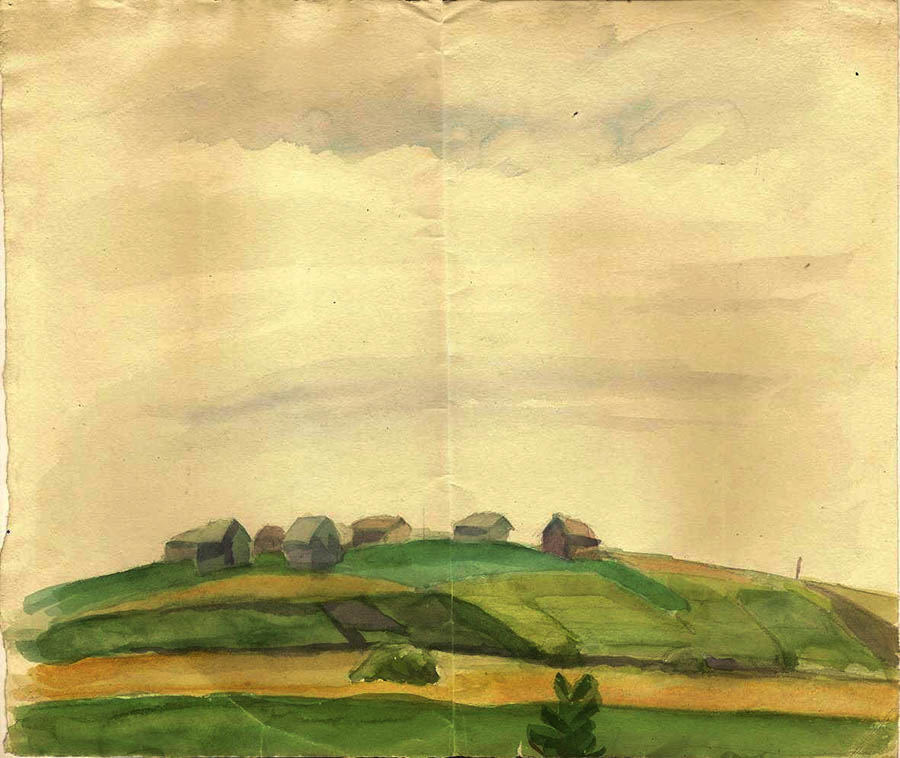 One of the most successful Soviet graphic artists, an acknowledged master of woodcuts and linocuts, and illustrator of editions of works by numerous Jewish writers, Yudovin showed his work nearly annually and was the subject of two monographs during his lifetime. After he died, he was exhibited and mentioned, but less often. The last major show of Yudovin’s work took place in 1956 in Leningrad.

Then he was remembered anew.

He was primarily recalled in Israel and, later, in Russia, in connection with his relative and mentor S. An-sky (Shloyme Rappoport), a writer and the father of Jewish ethnography. Yudovin was involved, as a photographer and artist, in An-sky’s renowned Jewish folk ethnography expeditions of 1912–1914, and they defined his artistic career over the next quarter century. Yudov’s engravings turned up again in various periodicals and books dealing with Eastern European Jews.  Yudovin was rightly seen as one of the principal artists of the old shetls, as an artist who had depicted their synagogues, old people, artisans, and, most important, the lush decorations on carved tombstones in their cemeteries. Yudovin was essentially the neoacademic alternative to the non-realist expressionist Marc Chagall, regarded as post-Soviet Russia’s primary Jewish artist. Yudovin and Chagall, who had been at loggerheads in Vitebsk during their lifetimes, were once again competitors, so to speak. Yudovin has even stole the limelight from Chagall (a seemingly impossible task) in terms of reproductions and collages on the covers of Jewish-themed books. 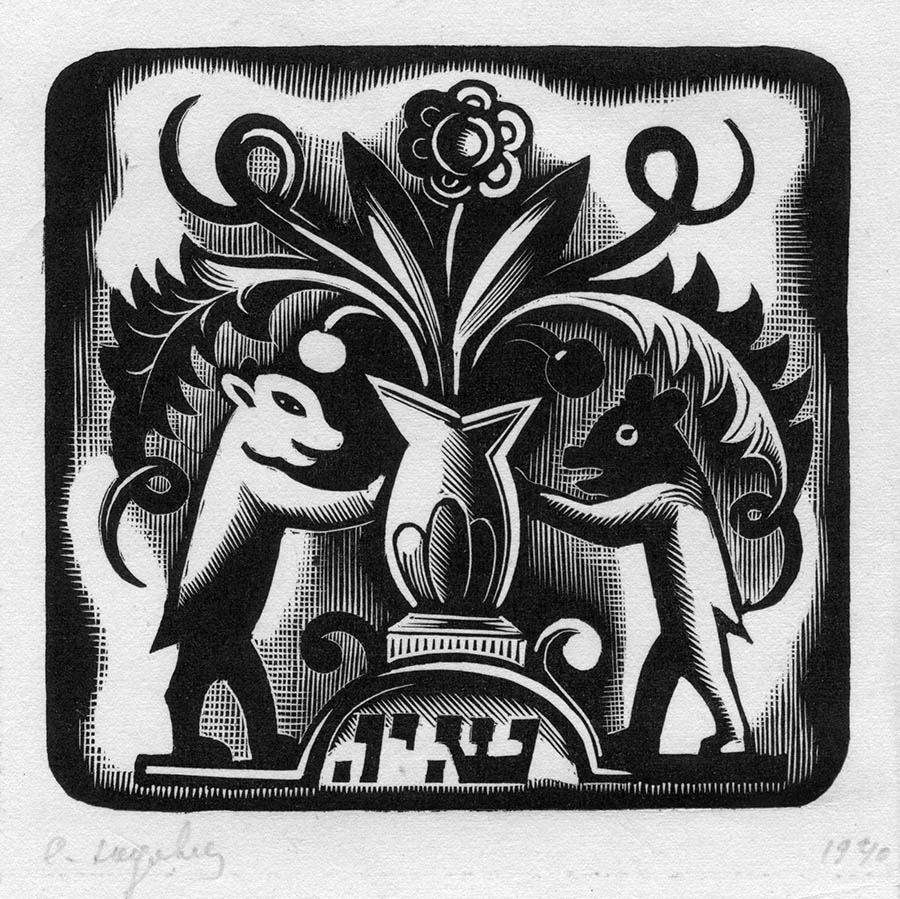 From the series Jewish Popular Ornamental Design, 1940. Courtesy of the Petersburg Judaica Center

Regardless of the so-called Jewish revival, Yudovin is remembered by those who write about the Nazi Siege of Leningrad or curate show dealing with the subject. Thanks to the series of linocuts Leningrad during the Great Fatherland War, Yudovin has come to be regarded as one of the most important Siege artists. His black-and-white, intolerably contrasty works from the war years and first postwar years produce a fascinating image of the dead city, whose horrifying beauty was so often described in diaries by people who witnessed the Siege firsthand. Yudovin’s self-portrait—of an artist doggedly laboring in an unheated studio—has become a primary visual symbol of the Siege.

Those who remember the Jewish Yudovin rarely remember the Siege Yudovin, and vice versa, despite the fact they had a lot in common. We could argue that Yudovin, with his skill in producing moribund, balanced compositions, and his powers of concentration, which was at odds with the empirical commotion of impressionism, was best equipped to deal with the topic of death. His famous engraving Burial in a Shtetl anticipated his images of Leningraders, carrying their dead on sledges.

In recent years, yet another, previously unknown aspect of Yudovin’s talent has been discovered. Due to the efforts of the Petersburg Judaica Center (where I have the honor to work), hundreds of photographs taken by Yudovin during the An-sky expeditions have been unearthed and published. These photographs have proven not only highly informative works, but also and primarily works of high art. Solomon Yudovin the pictoriailist has taken an honorary place alongside Alter Kacyzne and Roman Vishnyak, the principal photo portraitists of the vanished world of Eastern European Jewry.  Our only regret is that Yudovin, who produced brilliant photographs in his youth, never again took up a camera. Perhaps he deemed his work as a graphic artist superior to the craft of the photographer. Maybe Yudovin was brought up short by the fact that pictorialism, so attractive to him in his youth, had gone out of fashion and, moreover, was persecuted in the 1920s. Whatever the case, photography was a brief albeit vivid episode in his artistic career. Now, however, the photographs have also occupied a prominent place in numerous Jewish publications of recent years.

Having become a graphic artist, Yudovin ceased being a photographer. However, the photographs he took in the early twentieth century were to play a hidden but significant role in the history of Jewish art. They were a source of motifs and compositions for the graphic works of Yudovin himself (until he gave up Jewish subjects), and then were the basis of illustrations of the works of Sholom Aleichem by the much more famous artist Nathan Altman.

Solomon Yudovin is remembered in his guises as Jewish artist, Siege artist, and art photographer. It turns out, however, that Yudovin had a fourth guise, a most unexpected on.

One of the last Jewish institutions in prewar Leningrad was the Yakov Sverdlov Jewish House of Education (Yevdomprosvet), which survived until 1938 along with similar institutions for other ethnic minorities in the building at 10 Nekrasov Street, the current home of the city’s Bolshoi Puppet Theater. The Yevdomprosvet operated a theater studio in which amateur actors, guided by professional director Lev Mursky, staged plays in Yiddish. Yudovin was the stage and costume designer for two productions by this group: Draftees (1934) and The Call-Up (1936), based on the play by Mendele Mocher Sforim. Mursky’s papers, stored in the archives of the St. Petersburg Jewish Community Center, yielded a set of costume and scenery sketches done by Yudovin. This new, seemingly unrecognizable Yudovin is cheerful, quite lively and, most surprisingly, polychromatic, and there is a touch of the grotesque and satirical in his work. In a word, this is a fourth, hitherto unknown Yudovin.

These four incarnations of Solomon Yudovin are on diplay at the exhibition From Beshenkovichi to Leningrad, which opened on the 125th anniversary of the artist’s birth at the St. Petersburg Jewish Community Center at 3 Rubinstein Street. The Petersburg Judaica Center loaned photographs from the An-sky expeditions and woodcuts from the series Jewish Popular Ornamental Design. Petersburg collector Boris Faizullin supplied drawings and engravings from different periods, including the Siege, while the St. Petersburg Jewish Community Center has exhibited the works for the theater. The show has necessarily taken the shape of a sketch of sorts, but at the same time it is representative. All four Yudovins have finally met. Perhaps someday the Russian Museum, the Tretyakov Gallery or one of Moscow’s Jewish museums will remember the work of the classic Soviet graphic artist, but until that happens, hurry over to Rubinstein Street. From Beshenkovichi to Leningrad runs until mid January.

P.S. If you liked this article and found it informative and thought provoking, please share it with friends and colleagues on social networks. Robust readership numbers are the only feedback I get for a job I do in my spare time for free.