Dynamo Stadium Builders Getting the Round Around
MPRA
February 6, 2017

Workers at StroyProf, Ltd. (aka SMP, Ltd.) have been on strike since January 9. The firm has done electrical work in the Moscow subway, Dynamo Stadium, and other facilities. StroyProf is yet another example of the fraud thriving in the Moscow construction industry.

Like workers at other construction companies such as SMU-77, Ingeocom, and Horizon, workers at StroyProf have been hoodwinked. Instead of the 30,000 to 40,000 rubles a month they were promised, they have been issued 500 to 2,500 rubles from time to time for food and travel expenses. This has been going on since November 8, 2016. In early January, StroyProf owed different workers between 30,000 and 60,000 rubles.

“One day, the foreman tried to restrict our lunch break to ten minutes. We replied we wouldn’t be eating lunch for an hour. It wouldn’t be ten minutes, either, but as long as we needed. […] On November 14, we went to work at Dynamo Stadium. We were installing ducts. On the first day, we expected the uniforms and shoes required for safety. We were only offered the uniforms and shoes of workers who had the day off. We turned them down, since that doesn’t meet sanitary requirements,” the workers recalled.

In addition, management attempted to force the electricians to work alone on jobs that, according to work safety rules, can be done only by two workers.

On January 9, the workforce downed tools. The strikers contacted the MPRA trade union that had already been coordinating the campaign mounted by workers at SMU-77 and Horizon. On February 9, Horizon and StroyProf workers plan to pay a collective visit to the Moscow office of the Investigative Committee.

The Investigative Committee has become actively involved in the search for Anzor Khubuluri, head of SMU-77, which owes back wages to subway construction workers. Criminal charges have been filed.

The situation with Horizon’s workers, who had been working without contracts, is not as hopeful. The company has officially claimed the workers demanding back pay did not work for them, but off the record they have offered to pay back part of their debt, using the Tajik Migrant Workers movement as mediators.

StroyProf management has also been trying to avoid accountability for their actions. They have threatened workers they will be charged with extortion for demanding payment of wages. However, the example of the subway construction workers, who with MPRA’s help have achieved an appropriate response from law enforcement agencies, has given hope to other groups of hoodwinked workers.

Based on reporting from MPRA Moscow and Moscow Region

Translated by the Russian Reader. Thanks again to Comrade Ivan Ovsyannikov for the heads-up. MPRA is the Interregional Trade Union Workers Association. MPRA is affiliated with the IndustriALL Global Union.

Religion is one of the forms of spiritual oppression, lying everywhere on the masses of the people, who are oppressed by eternal work for others, need and isolation. The helplessness of the exploited classes in their struggle with the exploiters just as inevitably generates faith in a better life beyond the grave as the helplessness of the savage in his struggle with nature produces faith in gods, devils, miracles, etc. To him who works and is poor all his life religion teaches passivity and patience in earthly life, consoling him with the hope of a heavenly reward. To those who live on the labor of others religion teaches benevolence in earthly life, offering them a very cheap justification for all their exploiting existence and selling tickets to heavenly happiness at a reduced price. Religion is opium for the people.

The ninety-ninth anniversary of the 1918 Bolshevik decree separating church and state was marked by a small group of ardent leftists protesting the current clericalization of the Russian state and Russian society. On February 5, over a hundred people attended a picket on Chernyshevsky Square in southern Petersburg. For two hours, they fiercely criticized both the Russian Orthodox Church (ROC) and the relationship that has been built between the ROC and the Putin regime.

Members of various low-profile leftist movements gathered at the monument to Russian philosopher and revolutionary Nikolai Chernyshevsky. The protesters held the flags of the Rot Front, the United Communist Party, the Workers Revolutionary Communist Party, and Communists of Russia. Even truckers from the Association of Russian Carriers (OPR) came to condemn the ROC’s increasing appetite for property. Members of the Communist Party of the Russian Federation, which holds seats in the municipal, regional and national parliaments, ignored the event, for which they were roundly condemned by their non-systemic counterparts on the podium. 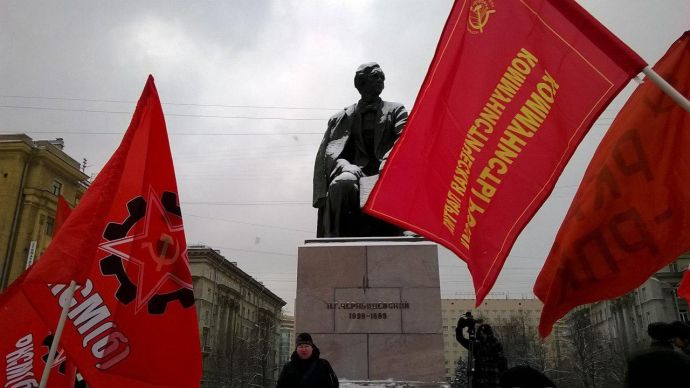 Unlike liberal opponents of plans to transfer ownership of St. Isaac’s Cathedral Museum to the ROC, the protesters made no attempt to be diplomatic and did not mince their words. Some speakers declared the ROC “satanic” and compared it to Islamic State, an organization that has been banned in Russia.

For ten minutes, Ivan Lokh, leader of the Witnesses of Foucault’s Pendulum, an atheist community, fiercely and emotionally denounced the ROC’s desire to exterminate science and culture. He then quoted Chernyshevsky, whose monument was the focal point of the entire rally.

“Religion’s purpose is to inure the unfortunate and hungry to the notion they must perpetually be hungry and rejoice in their plight. That’s what religion is!” proclaimed the activist.

ROC leaders are themselves not inclined to the asceticism they popularize among the oppressed classes, and this can only indicate that the highest ranks of ROC clergymen do not believe in God, said Lokh.

“We see the indecent luxury in which ROC hierarchs live. They do not fear their own God. They don’t fear Him, because they know for certain He doesn’t exist. This is the most obvious proof He really doesn’t exist!” the activist shouted to the applause of the crowd. 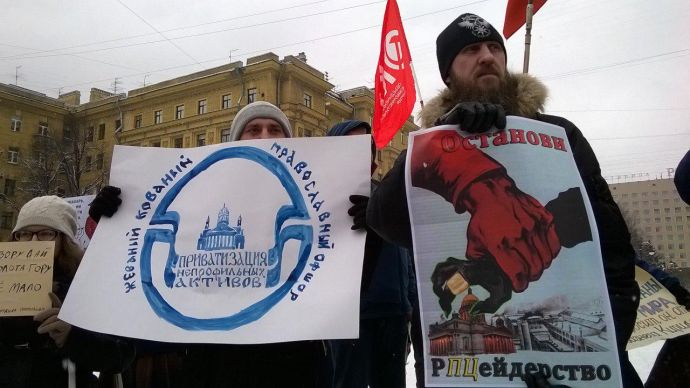 During breaks between speakers, the rally’s organizers asked protesters to carefully observe those in attendance in order to weed out provocateurs. The event’s moderator explained to ZakS.Ru that anti-clerical rallies have frequently been visited by people wanting to disrupt them. In addition, MP Vitaly Milonov’s public promise to interfere with the picket had forced protesters to be vigilant.

Semyon Borzenko, a member of the city committee of the unregistered United Communist Party’s regional branch, thrilled the crowd when he called for abolishing the federal law on transferring property to the ROC, which has led to the destruction of numerous museums. Borzenko also said atheists should campaign for the adoption of two law bills, drafted by local municipal deputy Irina Komolova during the previous sitting of the St. Petersburg Legislative Assembly. The first would protect the feelings of atheists, while the second would strip the ROC of its “totally unjustified tax breaks.” According to Borzenko, the “indecent luxury” mentioned by Ivan Lokh was a consequence of the fact the ROC did not pay taxes, unlike every other organization.

Nikolai Perov, leader of the regional branch of the Communists of Russia, focused his criticism on the “Zyuganovites,” who had welcomed the possible transfer of St. Isaac’s Cathedral to the ROC. 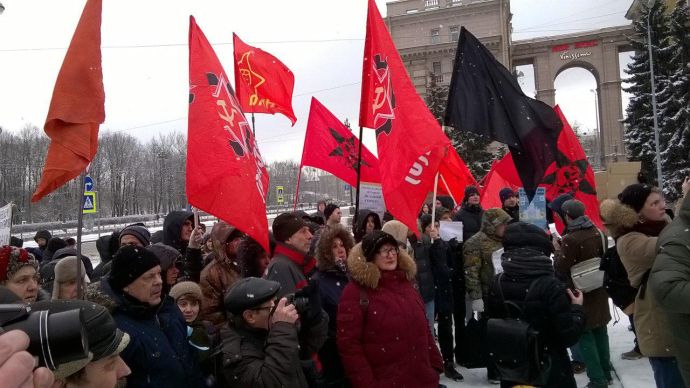 “It’s a crying shame that certain members of the communist movement, who sit in parliament, have retreated from the [Bolshevik] decree and Leninist principles. Shame on Zyuganov! Shame on [CPRF Petersburg Legislative Assembly member] Alexander Rassudov! Shame on [State Duma member and filmmaker] Vladimir Bortko! There’s not a single scientifically minded person left in the CPRF!” stated Perov.

Despite the concerns of organizers, the rally came off without any provocations or crackdowns on the part of law enforcement. Towards the end of the rally, human rights activist Dinar Idrisov (recently denounced by “soldier of Christ” and city parliament speaker Vyacheslav Makarov for insulting the feelings of believers) handed out pamphlets entitled “The Museum Belongs to the City.” Like a week ago, opponents of transferring St. Isaac’s to the ROC had their pictures taken, placards in hand, this time standing next to the monument to Nikolai Chernyshevsky.

Translated by the Russian Reader. Photos courtesy of ZakS.Ru

P.S. Thank God for the truly militant godless, Russian society’s only real bulwark against the militant godless masquerading as god-fearing soldiers of Christ for the tax breaks, luxurious lifestyle, and other perks that come from collaborating with the regime to befuddle and disempower ordinary people. The other bulwark against the maskers is the fact, of course, that the vast majority of Russians are de facto godless, whatever they might say about themselves when surveyed by FOM or some other all-seeing blind eye of the de facto atheist pollocracy. TRR