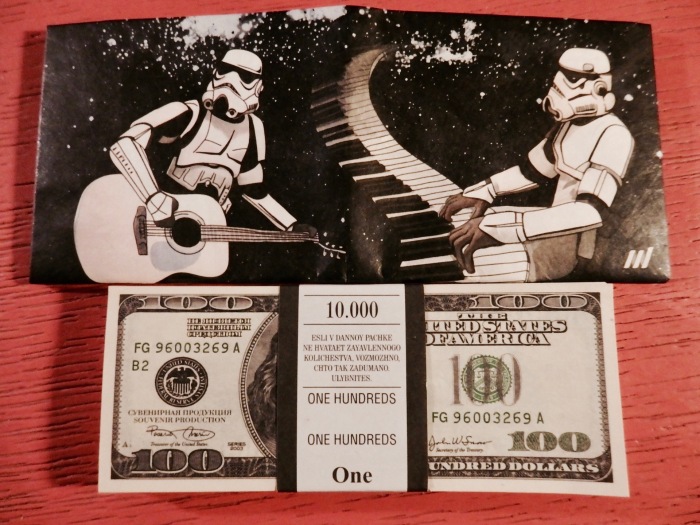 It’s embarrassing to brag about what a good day I’ve been having when I’m supposed to be all bummed out about the Fascist Pig-Elect’s taking the oath to become the plain old Fascist Pig in the Poke, but it’s true.

I don’t quite get it, but things have been going my way all day.

For example, I lucked out while shopping this afternoon at our neighborhood Auchan hypermarket. They were having a sale on $10,000 packs of hundred dollar bills: 67 rubles 39 kopecks a pop!

I guess Auchan knows something the rest of us don’t know about what’s going to happen to the mighty US dollar when the Fascist Pig in the Poke starts implementing his “economic policies.”

So Auchan decided to unload the wads of US cash they had lying round the store while they were still worth something, even if it was only 67.39 rubles.

Good on them, as the Aussies say.

By sheer coincidence, when my true love came home from work he presented me with a new, totally recyclable wallet, made from a synthetic material called Tyvek. It weighs next to nothing, but now I’ll have somewhere to keep my nearly worthless $10,000 safe.

And it’s embossed with images of Imperial stormtroopers!

If you’ve seen the terrific new Star Wars movie, Rogue One, the best Star Wars movie in 39 years, you’ll know it’s a very timely tale about what happens when ordinary people resist an emergent fascist government: they all get killed.

Like I said, it’s been a terrific day. TRR