The question was addressed to my dog, not to me.

And indeed there was something to drink (or rather, lick up) because huge puddles of pungent alcohol had been splashed on the pavement all round the morning’s tragic heroes.

The particular genre scene had been made possible and has become more frequent due to the fact that the neighborhood outlet of the mighty Dixie supermarket chain, opposite where the drunks were hunched, had recently begun operating round the clock, and several months earlier, a 24-hour RosAl chain liquor shop had opened just round the corner too.

In Petersburg, retail, over-the-counter sale of liquor is illegal after ten o’clock in the evening. So in the wee hours, RosAl transforms itself into an impromptu dive, a poorly concealed ryumochnaya, the name for the humbly appointed but essential proletarian after-work bars that used to exist in abundance in Leningrad and early post-perestroika Petersburg.

But RosAl utterly lacks the charm possessed by the legendary Little Twenty bar, a proper Soviet ryumochnaya, which had the stuff in spades. The Little Twenty was disappeared several years ago by the new proprietors of the large commercial premises on the corner, which had housed both the bar and the Soviet style Loaf grocery story. The Loaf had been a hundred times more human, humane, and convenient than the wretched Dixie chain supermarket that usurped it.

The Little Twenty had been lively and colorful and, sometimes, scary. Most of all, it was dripping with a specific kind of post-war Leningrad and 1990s-era Petersburg history. As more and more such joints disappear, it will be harder to retell this history in a way that would make sense to listeners. The new urban environment will simply not incline them to believe what you tell them.

How can you explain to the decent, clean-cut Russian kids of today or newly arrived foreigners that the neighborhood was a lot nicer and cozier when you had to get your groceries not by grabbing them off the shelf and dashing to the checkout, but by asking for them from not always friendly female store clerks on the other side of the dairy counter, the bread counter, the meat counter, the produce counter, the newspapers and magazines counter, the coffee, tea, and sugar counter, and so on?

The flip side was that once these microlocally powerful grocery matrons and maidens finally recognized you as a local, if not by name, then at least visually, they would treat you much more warmly and “loyally,” as they say nowadays. How do you explain to these rosy-cheeked Russian kids and eager tourists, who are either used to the new consumerist order or relieved to find it firmly in place in the former Evil Empire, that next door to this inconvenient grocery store was an outwardly nondescript saloon, where fights broke out much too often, and more than a few times you saw its patrons carried out feet first (because for whatever reason they were no longer able to walk out on their own two), and all this apparent awfulness and backwardness made the neighborhood a better, literally more democratic place to live?

The picture gets worse if you are a nominal old-timer. In the spot where the cynical filling station for binge drinkers known as RosAl now does its land office business between the hours of one and six o’clock in the morning, not long ago there was a flagrantly old-fashioned and utterly unfashionable but incredibly handy and inexpensive clothing and notions shop. Among other things the shop housed a clothing repair workshop.

The calm and quiet queen of this workshop was a seamstress in her sixties, who could handle whatever darning, hemming or other repair job you set her gracefully and quickly. She was probably the reason the people of our neighborhood looked more or less decent sartorially.

I have no clue where this wonderful seamstress has now ended up. Instead of her, this morning the night staff of the RosAl dive greeted us, so to speak, or rather, sniggered at the sight of a large, middle-aged man and a tiny dog out walking so early. They are probably nice young folks, but their only visible life skills are selling liter bottles of vodka and plastic cups to clinical alcoholics, like the sad duo slowly slipping into total incoherence on the corner.

A little further down the same alley as RosAl, dog and man happened upon a newish police van, parked right next to the so-called Orchid spa-salon (i.e., a brothel). Out of the corner of my eye I saw sleeping bodies in the back seat. It had been a tough watch, I suppose.

At the other end of our block, the well-known and seemingly beloved Technical Books bookstore has been closed and empty for several years now. One would imagine the spot would be a gold mine (right on the corner of the Nevsky, the city’s main main street), but the windows of its former premises have been boarded up long ago, and just to be safe, apparently, now they have been walled up too. It produces a scary and sad impression nor does it make any sense. 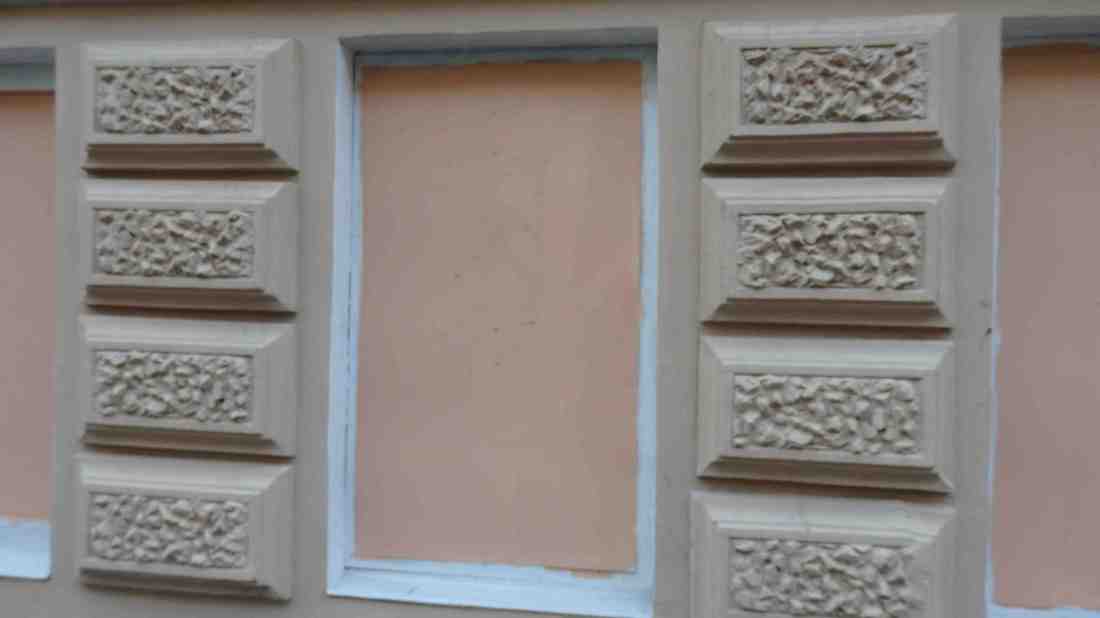 On the same side of the street as Technical Books, but much closer to the former Loaf grocery shop and current Dixie supermarket is another mysteriously long-abandoned commercial space, the former grocery shop Fairy Tale. (That was its name if memory serves me.) Since it opened round the same time as the Dixiecrats were savagely killing off my dearly beloved Loaf shop and the Little Twenty bar, I stubbornly patronized this ridiculous, badly managed grocer’s to the point they issued me a discount card.

I was not particularly sorry to see it go, but its premises have also stood empty for many years, although in the last month or so there have been vague signs of life as though something were on the verge of opening in the place, god knows what. By the way things have been going, it will probably be another Dixie. They have been breeding unaccountably in our district like mushrooms, quietly pushing all other forms of commercial life closer to oblivion.

When I started this story, I just wanted to sketch a quick genre scene, but in the writing it has turned into a full-fledged albeit half-assed socio-economic portrait of our block.

Having read it, who would dare say the invisible hand of the market has managed the immovable objects and animated beings on our little street for the best? I wouldn’t.

Translation and photos by the Russian Reader