The exhibition {NE MIR} (NO PEACE), a sequel to and an elaboration on the itinerant exhibition/performance that recently took place in Petersburg, opens today in Riga. I sent my photographs of Antiwar Weekend, a walk around the city made by Ekaterina Nenasheva. She strolled around Petersburg in a blood-stained, camouflage uniform. We looked for places in one way or another connected with war, aggression, the army or the memory of them. Actually, we didn’t have to love for them: they were everywhere. Our city is traumatized. Aggression and the memory of wars are offered to tourists as souvenirs, and I see this as an attempt not only at self-assertion but also at conveying this feeling to everyone. As we walked round the city, passersby paid no special attention to the young woman in camouflage. She had become yet another military artifact, a customary sight here. Thirteen photographs, Petersburg, a sunny day in 2015. 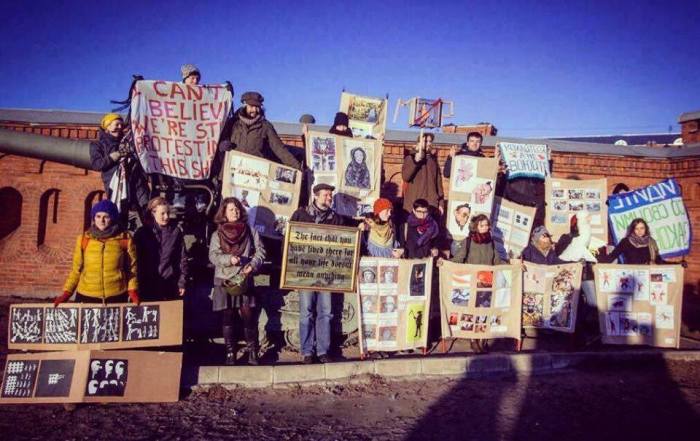 {NE MIR} is a series of antiwar street exhibitions launched by a group of artists from Moscow and Petersburg. The project’s objective is to discuss war in its different forms, make a collective artistic statement on the relationship between the individual and the state, and investigate the borders of street art in today’s Russia.

In Russia, there is a law prohibiting marches and rallies (in fact, any political or public gathering of more than two people) without obtaining permission from the authorities ten days beforehand. Moreover, these rallies can be held only in specific places, which are usually situated on the outskirts of cities or are difficult for the public to access. The Russian authorities have the right to prohibit any rally, and in that case it will be considered illegal.

Since their request was turned down three times by local authorities, the artists who launched {NE MIR} had no other choice than to make mobile banners and wander the city under the watchful eye of regular police and riot police.

The urban environment, which dictated the form of protest (wandering round the city), thus functioned as the exhibition’s curator.

This interactive format raised many questions both in terms of art and civic involvement.

How should Russian artists act in the current situation when any statement is deemed disorderly conduct or even a crime? What is the visual code used by police and random passersby, and what are the circumstances under which dialogue is possible? How are absolutely defenseless artists regarded by viewers when they display their artworks in such an aggressive environment?

We intend to look for answers to these questions both inside and outside Russia.

{NE MIR}: Dialogues is a series of itinerant exhibitions and discussions held outside Russia in free art spaces and galleries. It is an attempt to promote dialogue among citizens, artists, and activists, and spark cultural and social interaction between people from different societies and countries.

The exhibition of the {NE MIR} project in Riga will include paintings, graphic art, installations, photographs, and video works by artists from Russia, Ukraine, Denmark, and Chile.

A discussion entitled “The Image of War: The Mass Image and the Private Image” will be held at 7 p.m. on February 21 at Bolderāja Bookshop and Cafe (Avotu 29, Riga), with the exhibition opening to follow at 8 p.m.

The court has sentenced the woman to 320 hours of compulsory community service and ordered her laptop, which served as physical evidence in the case, destroyed.

As Grani.ru explains, the court based its verdict on the conclusion reached by a forensic linguist that Vologzheninova had incited “ethnic [sic] hatred and enmity towards volunteers from Russia” who were involved in the armed conflict in eastern Ukraine, as well as towards public officials.

Criminal charges were filed against Vologzheninova after she [re]posted Anatoly Marushkevich’s poem “Katsaps,” along with an image of a young Ukrainian woman and the caption “Death to the Moscow Occupiers,” and a caricature featuring a man resembling Vladimir Putin leaning over the Donbass holding a knife. The last post was later excluded from the evidence.

Translated by the Russian Reader. Photo courtesy of Nasha Gazeta. See my previous post on this case: “The Case of Ekaterina Vologzheninova: What What You ‘Like’,” October 21, 2015