A Letter from Socrates

You can imprison us but you can never break us. We are not neo-Nazis who when they find themselves in prison try to slash their wrists, hang themselves, and swallow razor blades right off the bat. And who in the camps  quickly join the “goats” (kozlyatnya), the prison household work brigades. We can be part of the general prison population. We don’t have to fear that our fingers will be beaten off with a hammer or we will be whacked upside the head with a slipper, because we haven’t done anything “gross.” We don’t judge people by ethnicity, color, and creed. Here in prison we are all “wogs” and “bandits” in the eyes of the law, because we valued honor and truth  more than liberty. We are not Moscow chumps who imagined they were Aryan Vikings, but who as soon they went into the system realized they were not fascists but were like everyone else here. No, in Russia there will never be an Aryan Brotherhood like in the US. In our prisons there is a friendship of peoples.

Moscow Babylon has seduced, hoodwinked, and punished all the poor fellows from all over the Soviet Union. Now we all hate those greasy pushers in suits flashing IDs, the stupid cops who have involuntarily become polizei, and we laugh at each other when we tell the stories of how we ended up here. Now, as in the years of the Soviet-era Great Terror, there are entire social groups getting run through the system for the same crimes. This is no fight against crime. It is a war with competitors and against their own (potential) poverty. The law enforcement agencies are doing business when they jail businessmen and officials for fraud (Article 159 of the Criminal Code). They nick their businesses from them and get rid of competitors who got caught with their hands in the till and did not cut them in on the action. Since the entire Russian business world is built on financial scams and fraudulent schemes, there is no shortage of new criminal cases.

The same is true in drugs trafficking. The terrible Criminal Code Article 228, Parts 3 and 4 (drug dealing), introduced by the president, has made it possible to populate the prisons and camps with Central Asian nationals, which has done nothing at all to disrupt the well-regulated flow of drugs, but justifies the work of the Russian Federal Drug Control Service and the entire Russian Federal Penitentiary Service. And such a time-honored crime among  prisoners as theft (Article 158) gives police investigators wide berth for padding solved cases stats and packing the penitentiaries with mobs of working stiffs and poor folk, who bust their humps in the prison colonies, thus directly lining the pockets of the wardens.

Our entire penitentiary system is a post-Soviet Gulag that has not fully embarked on the capitalist path. Formally, all the system’s rules and regulations have remained as they were in Soviet times, but the current Federal Penitentiary Service employees has no clue how to rehabilitate us. On the other hand, they have learned how to make money off us, from embezzling allocated funds to the personal deals made by criminal investigators at the local level. Russia now has commercial prisons. If you have money, you can forget about the unwritten “understandings” that once reigned. Watch TV and tuck into groceries ordered from the cops’ online store at inflated prices. Almost anything can be bought.  Just don’t rock the system.

Prison is a mirror of our society. But the atomization of the individual is not as forceful as it is on the outside. It is harder to survive alone. That is why it is better to live in “families” than to go crazy alone between four walls. For a long time there has been no doubt that the regime plans to combat and jail us anarchists and anti-fascists. For the time being they are only jailing us. Though now we are not such a big threat to the state, we justifiy the existence of the Center for Extremism Prevention (Center “E”), which does everything it can to defend its beloved regime. Although in most cases this amounts to combating seditious posts on the Internet. 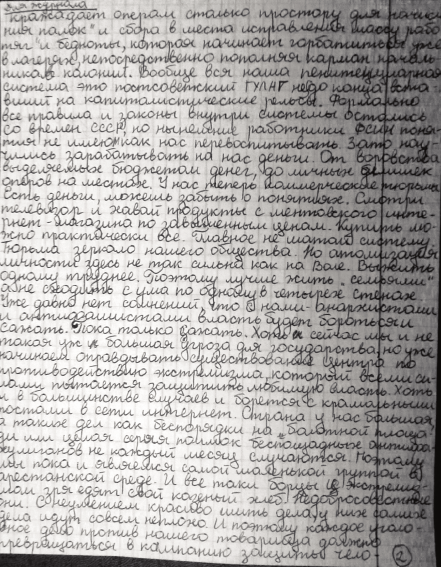 Our country is big, and things like the riots on Bolotnaya Square or the capture of ruthless antifa hooligan do not happen every months. So for the time we are the smallest group in the prison community. And yet the anti-extremism police eat their government-issued bread for nothing. They are unscrupulous. Although they are clumsy at fabricating cases,  they are doing quite well for themselves. And so every criminal case against a comrade of ours must be turned into a campaign to defend the individual from the state’s power over him or her. All the punitive institutions of the state should be subjected to attack. We and the people are on one side, and this leviathan with legs and dressed in a uniform is on the other.

This letter was originally written as an article, entitled “Alexei Sutuga’s Letter from Behind Bars,” and published on July 19, 2015, in Avtonom 36 (2015).

Images, above, courtesy of Autonomous Action

Thanks to Vladimir Akimenkov for the heads-up. If you follow this last link you will find information, in Russian, about Sutuga’s address at the prison colony in Angarsk where he is currently serving his sentence, where and how to send letters to him, and how you can help him and his family financially.

Alexei Sutuga is an anti-fascist and member of the Autonomous Action anarchist movement. In April 2012, he was arrested on suspicion that on December 4, 2011, he and a group of anti-fascists had assaulted a group of young nationalists, and that on December 17, 2011, he and his friend the anti-fascist Alexei Olesinov had assaulted security guards at the Vozdukh Club in Moscow. The accused and people who had been attending a concert at the club testified that the security guards had themselves provoked the fight and used weapons. In 2013, police investigators admitted that Sutuga had had nothing to do with the incident on December 4, 2011. In  the summer of 2013, he was released on bail from remand prison, and in January 2014 the case against him was closed as part of an amnesty. Afterwards, according to Sutuga, Center “E” officers threatened him with “problems.”

In April 2014, Sutuga was detained  by Center “E” operatives after an anti-fascist concert in Moscow’s Izmailovo district. According to a report by the For Human Rights Movement, ten other people were detained besides Sutuga. The pretext was a crime committed by a person unknown in the vicinity of the concert, but according to the human rights activists, there were no grounds for suspecting the anti-fascists. Sutuga was asked about a trip to Maidan as he was being detained. All the other detainees were soon released, but a disorderly conduct report was filed against Sutuga and he was kept at the police station.  He was later charged with having delivered multiple blows with a chair, his feet, and an improvised hammer to several people during a fight at a Sbarro chain restaurant outlet on January 2, 2014. Sutuga himself claimed that he had been trying to separate the people involved in the fight, which, according to him, had taken place between a group of right-wing youth and another group of young people, and that in the process of pulling them apart he had struck someone once. On October 1, 2014, Sutuga was sentenced to three years and one month in a medium-security penal colony. On December  17, 2014, an appeals court upheld the judgment.

In April of this year, Antti Rautiainen reported the following to Infoshop News (which I have summarized).

Sutuga has been transferred to the Irkutsk Region. He has refused to do household work in prison (which could reduce his sentence), unlike neo-Nazis Maxim Martsinkevich and Roman Zheleznov, as this form of collaborating with prison wardens is impossible for an anarchist.

Sutuga is twenty-nine years old. His sentence will end in May 2017.

On March 17, Sutuga went on hunger strike, demanding that his confiscated letters and books be returned to him and that he be transferred from the remand prison in Irkutsk, where he was incarcerated, to a prison colony.

On March 22, Sutuga was transferred to Prison Colony No.14 in Angarsk.

Sutuga has a wife and child who live in Ukraine. His spouse is studying for a PhD and raising their child.

The cost of a two-way flight to Angarsk for his wife and son is about 60,000 rubles (approx. 1,200 euros). Only one long-term conjugal/family visit is permitted every three months. Alexei’s family needs money for sending parcels of food and other necessities to the prison colony.