“The residents of new buildings are forced to look at the windows of neighboring buildings and not see the light of day”
Olga Trakhanova and Olga Shamina
July 6, 2015
Bolshoi Gorod

Recently, residents of several new areas of Moscow and satellite cities have been protesting against excessively dense development. Residents of Krasnogorsk, Khimki, and Reutov, among other suburbs, are dissatisfied. The complaints are one and the same. High-rise residential buildings are built too close to each other, the necessary infrastructure is not constructed, and roads and public transport cannot withstand the rapid population growth. More and more often the word “ghetto” is invoked. According to experts, this is the likely future of these areas.

We asked residents of Moscow suburbs who are unhappy with excessively dense development to tell us why they do not like living in their towns. Here, for example, you can see how houses are being built in Reutov. Here are photos of dense development in the Pavshino Floodplain.

Yevgeny Sosedov, Resident of Krasnogorsk, chairman of the Moscow branch of the All-Russia Society for the Protection of Historical and Cultural Landmarks (VOOPIK)

I live in the Krasnogorsk District of Moscow Region. I was born and raised in the village of Arkhangelskoye, but for the last fourteen years I have lived in Krasnogorsk.

I am dissatisfied with the town planning policies of the regional and municipal authorities, which have a negative effect on the quality of life. Practically speaking, in the last few years we have had to live on a giant construction site. The city and the district are being thoughtlessly built over with high-rises (up to forty-five storeys high). All town-planning standards have been violated; green spaces, forests, parks, cultural heritage protection zones, and nature reserves have been destroyed. Just next to my house, two gigantic shopping centers have been built, and several hectares of a historic park were cut down to make way for them. A third shopping center has been built literally ten meters from my windows, blocking the entire view and depriving the residents of our building of sleep during the five years it was being built. To top it off, intolerable conditions for navigating the city have been created: pedestrian paths have been cut off or dug up, parks are cluttered, and there are no sidewalks along highways and roads.

Infrastructural problems have been snowballing. There is no transportation infrastructure. The existing roads cannot cope with the flow of vehicles. There are traffic jams nearly round the clock in the district. To get to work on weekdays, residents have to leave at five or six in the morning.

During rush hour it is almost impossible to get onto commuter trains. People jam into them at a run. These problems are not being solved, they are only getting worse. For example, the Mortongrad Ilinskoye-Usovo development project, approved by the governor, presupposes delivering another fifty thousand people to the already overburdened Krasnogorskaya train platform.

High-rises are being built in the most problematic traffic spots without obliging investors to reconstruct roads and build interchanges. For example, the Moscow Region Urban Planning Committee, chaired by the governor, has approved the construction of the nine 32-storey towers of the Tetris residential complex in Pavshino at the most problematic spot in terms of traffic. This is in addition to the already-existing Youth residential complex, being built by the same firm, and the 45-storey towers of the Krost complex, which was built without any permits at all. (The development plan still has not been submitted.)

The situation is identical with all other infrastructure. Moscow Region is the leader in terms of families waiting in queues for spots in kindergartens. There are huge problems with health care facilities. There are only two functioning clinics in Krasnogorsk, one of which was built in the nineteenth century. And yet, the population increases by several tens of thousands of people annually, and this whole burden is placed on the existing infrastructure. The biggest infrastructural problem in store for us in the coming years is the drinking water supply and sewerage.

One of the main problems associated with real estate development is the rapid deterioration of the environment, which has extremely detrimental effects on the populace’s health and quality of life: the destruction and clear-cutting of thousands of hectares of forests, the shallowing of bodies of water and sources of drinking water, and the redevelopment of agricultural land and nature reserves.

Something must be said about the quality of the new construction. Moscow Region is a leader in terms of putting so-called new substandard housing on line, housing which starts to fall apart as soon as it is put into service, and huge amounts of money are subsequently spent on its maintenance.

None of these housing projects is provided with places of employment. 80–90% of the population of Moscow Region towns near Moscow travel back and forth to work in Moscow every day.

Huge estates of high-rises, built in the middle of fields according to obsolete designs and without the necessary infrastructure and places of employment, will inevitably turn into ghettoes. 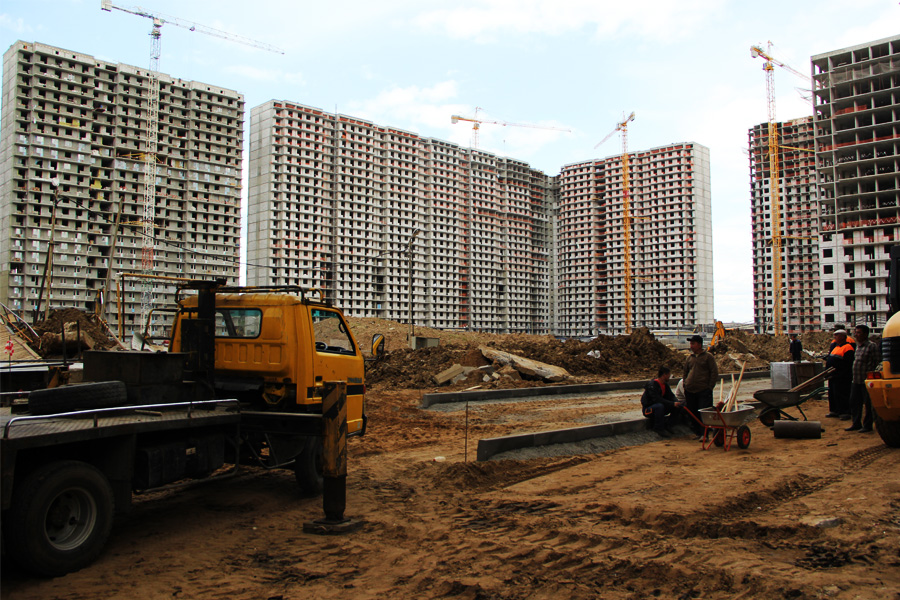 The town of Reutov is divided into South and North Reutov. There is new construction in both parts. However, North Reutov is adjacent to the subway, and so, apparently, it is being developed more recklessly.

When flats in South Reutov were being presold, the future tenants asked the developer what would be built near their home. The construction company told them there would be a square, shops, and other infrastructure. Instead, however, dozens of residential buildings were built.

A new neighborhood is being built next to us. One of the buildings there has 645 flats. If three people end up living in each flat—and there are several such buildings—what will happen to our town in the next five years? Property prices will fall, and consequently it will be harder and harder to unload a flat in such a “marvelous” place.

While not all the buildings are inhabited, the town is already overcrowded. Population density in Reutov is nearly one and a half times greater than in Singapore.

Because of the dense development, the town’s ecology is deteriorating. All trees are cut down on construction sites. Consequently, South Reutov is almost bereft of greenery. And the residents of news buildings are forced to look at the windows of neighboring buildings and not see the light of day.

We, the residents of the Novokurkino District of Khimki, are suffering from the illegal new construction of the PIK Group, a catastrophic lack of infrastructure, the corruption of the local administration, and the inaction of officials and law enforcement agencies. Our district is rapidly turning into a ghetto. We are being deprived of the right to live in humane conditions. We have been trying to put up a fight, but we have remained unheard.

For several months, the district’s residents have been trying to halt the illegal construction of multi-storey residential buildings that the PIK Group has launched on the site of planned infrastructure. Due to excess housing density, the district of Novokurkino, which has a population of 40,000 and includes three microdistricts, is experiencing a catastrophic shortage of infrastructure.

PIK Group has been developing Novokurkino for ten years. The district development plan was approved in 2005; the latest revisions for the sixth and seventh microdistricts were officially approved and went through the compulsory procedure of public hearings way back in 2011. During this time, PIK has built and settled all the residential buildings in the sixth and seventh microdistricts and has begun construction of the next microdistrict, the eighth, but the infrastructure sites stipulated by the plan have not been completed. The construction of schools, kindergartens, and medical clinics has been unacceptably slow, and residents have been unsuccessfully complaining about the situation for several years.

At this point, although 100% of the housing has been built in the sixth and seventh microdistricts, only about 60% of the kindergartens, 50% of the schools, 30% of the medical clinics, and 18% of the parking lots have been built as planned. In the seventh microdistrict, construction of a school, a clinic, a multi-storey car park, and a sports center has not even been started. Consequently, the capacity of kindergartens, schools, and clinics in Khimki and the nearest district of Moscow has been stretched to critical limits. The situation with parking remains catastrophic and continues to worsen.

Despite these circumstances, the developer, PIK Group, has begun building new high-rise residential buildings on the site of the planned infrastructure sites with the permission of local authorities. On the site where, according to the district plan, there should be have been the only sports center in the district, equipped with a parking lot, they have begun building five residential buildings. The building permits were issued on the basis of a city land development plan that was at odds with the district development plan. The Khimki prosecutor’s office confirmed the illegality of the city land development plan, and it was canceled. However, the building permits have still not been withdrawn. Taking advantage of the inaction of the authorities, the developer began construction work, violating all the building codes in the process. At present, the foundation pits of the first buildings have been dug, and piles are being driven into the ground. There is a hoarding on the site advertising that flat are for sale, and pre-booking of spots is underway.

For two and a half weeks, residents who were against the ensuing construction blocked it on their own by parking their cars opposite the driveway to the site, thus preventing construction equipment from entering. However, after almost three weeks of our blocking the construction, the PIK Group moved about twenty well-built young men into workers’ sheds who set about illegally towing away the cars, damaging two of them in the process. The total damage came to about 600,000 rubles [approx. 9,500 euros]. Moreover, the district beat cop was present. He signed the towing tickets, which is not one of his duties, not to mention the fact that the drivers of the cars had not violated any parking rules. Next, PIK fenced off the driveway onto the construction site with concrete blocks, seizing half of the road in the process, meaning they left only one lane for travel. The road is very busy, because it leads to the school. Now all residents, especially children, are also suffering substantial discomfort from this as well.

In addition, permits are being sought for residential construction on two more plots of land, which had originally been zoned for parking lots and a shopping mall with a parking lot.

All photos courtesy of tuteyshaya.livejournal.com