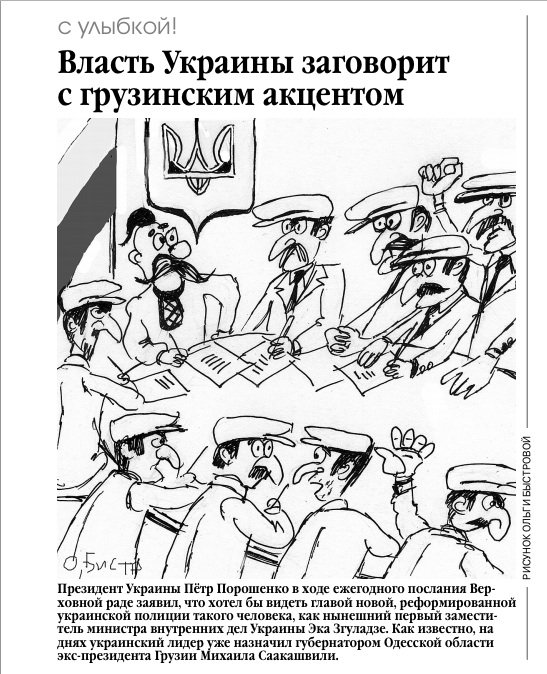 Ukrainian authorities to speak with a Georgian accent

During an annual address to the Supreme Rada, Ukrainian President Petro Poroshenko said he would like to see a person like current First Deputy Minister of Affairs Eka Zguladze as head of the new, reformed Ukrainian police. Recently the Ukrainian leader appointed ex-Georgian President Mikheil Saakashvili Governor of the Odessa Region.

For those readers unfamiliar with the iconology of post-Soviet Russian neocolonialist bigotry, I should explain that the man at the head of the table is a “typical” Ukrainian, while the fellows with long hooked noses and sporting hats are “typical” Georgians.

Thanks to Comrade VZ for the head-up.

This is Maria. She writes existential novellas.

If you find yourself on Petrograd’s Ligovsky Prospect in the next week, go to the Open Workshops (Ligovsky Prospect 99; open noon–9 p.m., Monday–Saturday) and see the wonderful collective photographic project Who Are You? or Passersby on Ligovsky Project, which is mounted right on the street.

Here is what the project’s authors have to say about it:

During the week of January 24–30, 2015, the photography course led by Dmitry Pryakhin at the Open Workshops will invite passersby to have their photograph taken and ask them who they are and how things are going. The photographs and replies will be published daily on the project website: The end result will be a large number of photos of various passersby on Petersburg’s Ligovsky Prospect and their answers to our questions.

This was my favorite picture/story combination of the ones I saw and read at the street exhibition: 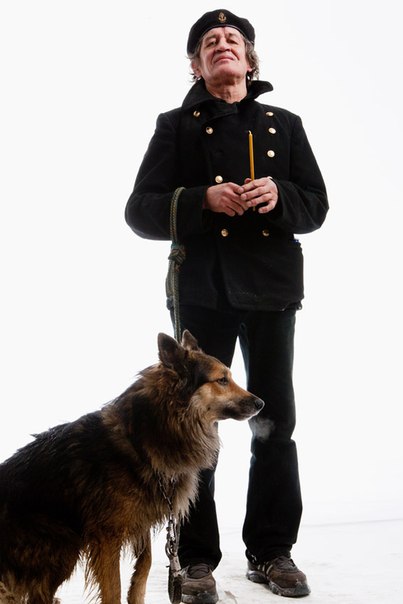 I went out at night for cigarettes, and Deng was in a sandbox howling at the moon. I invited him to come spend the night. In the morning it turned out his owners had died.

Deng is the father of China’s reforms.

Thanks to Comrade KB for the heads-up. 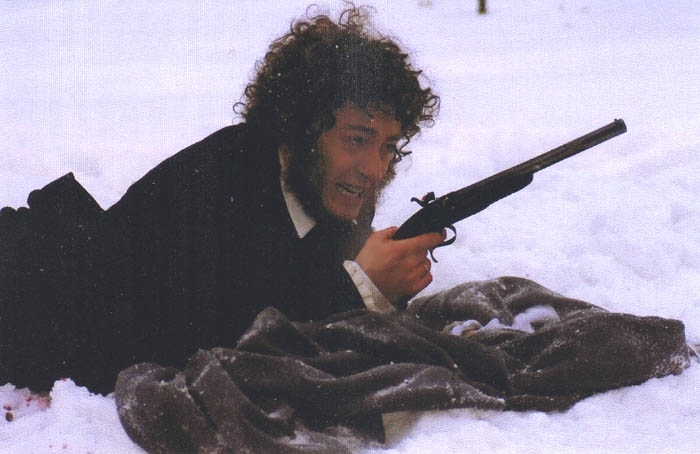 Alexander Pushkin was like the Prophet Elijah or something, and a Putinist avant la lettre, according to Sergei Nekrasov, director of the National Pushkin Museum in Petersburg, as quoted by the dubious FAN (Federal News Agency):**

[“Pushkin foresaw the constant clashes with Western Europe and the West in general. He foresaw the soulless but powerful and aggressive evolution of the United States of North America, as they were then called. He had no illusions about the United States. Everyone said, ‘Ah, a new country! Democracy!’ and so on. But in his memoirs Pushkin strongly questioned this.”] 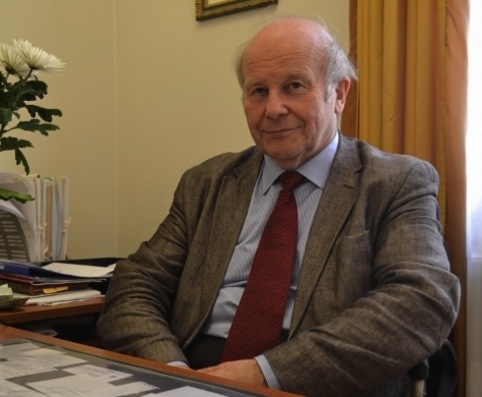 Today, June 6, is Pushkin’s birthday, by the way. If the great poet had not been gunned down by French national Georges d’Anthès in 1837 as part of a plot engineered by fifth columnists, foreign agents, and foreign-funded local NGOS, he would have been 216 today and still, no doubt, thrilling us with his poignant verses and chilling prophecies.

Maybe he would have even been a contestant on the reality TV show Битва экстрасенсов (Battle of the Psychics).

Thanks to KV, a true connoisseur of Russian language and literature, for the heads-up.

** She pointed to a board that displayed a makeshift directory of the building’s current occupants. The names were printed out on small scraps of paper, and none of them were Internet Research. But I did recognize one: “FAN,” or Federal News Agency. I had read some news articles claiming that FAN was part of a network of pro-Kremlin news sites run out of 55 Savushkina, also funded by Evgeny Prigozhin. Former Internet Research Agency employees I had spoken to said they believed FAN was another wing of the same operation, under a different name. I asked to speak to someone from FAN. To my surprise, the receptionist picked up the phone, spoke into it for a few seconds and then informed us that Evgeny Zubarev, the editor in chief of FAN, would be right out to meet us. (Adrian Chen, “The Agency,” The New York Times Magazine, June 2, 2015)