Here are a few photographs, from a longer, excellent photo reportage by David Frenkel, of pickets in Petersburg held this past Wednesday, May 6, in support of the political prisoners now serving time in prison as part of the Bolotnaya Square case.

Three years ago, on May 6, 2012, a peaceful, permitted anti-Putin demonstration in Moscow was blocked and partly kettled by police, resulting in a scuffle between some marchers and police, hundreds of arrests and, in the years after the “riot,” dozens of convictions of people who were there that day.

Some of the defendants have been recognized by prisoners of conscience by Amnesty International, and many observers have argued that the police attack on the peaceful march was Putin’s deliberate revenge on those freethinking Russians who had the temerity to protest his “electoral victory” on the eve of his re-inauguration.

Bizarrely, three years later, the investigation and the arrests continue. Less than a month ago, for example, civil rights activist Natalya Pelevina was questioned as a suspect in the case and had her apartment searched.

“Renat Fatkhutdinov was a [Kazan] policeman who threatened to rape and torture arrestees. He got a three-year suspended sentence. Denis Lutskevich was a student who was beaten by the riot police for trying to defend a young woman. He got three years and six months in prison.” 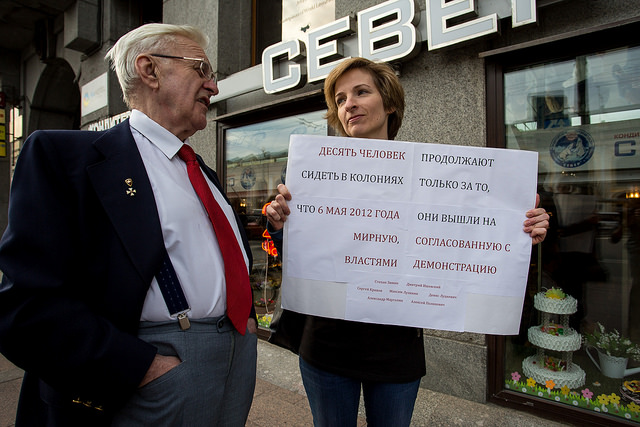 “Ten people are still serving prison terms for the fact that on May 6,  2012, they went to a peaceful demonstration that had been permitted by the authorities.”

“Anatoly Serdyukov, the defense minister, embezzled 3 billion rubles and was amnestied. Maxim Luzyanin, an businessman, scratched the enamel on a policeman’s tooth an was sentenced to four and a half years in prison. Release the Bolotnaya Square prisoners!”

“Igor Aranson, head of the local council of deputies [in the Moscow Region town of Uvarovka] [and member of the ruling United Russia party] severally beat up two men he did not know [because they had crossed in front of his car on a crosswalk], but the court declared that Aranson had been the victim of the crime. Sergei Krivov, a Ph.D. in Mathematics and Physics, grabbed a police officer’s truncheon. He was sentenced to three years and nine months in prison. Release the prisoners of May 6!”

Thanks to David Frenkel for permission to reproduce these photographs here.

2 thoughts on “The Bolotnaya Square Case: The Third Anniversary”