The More Patriotic the Patriot, the More Western-Centric He Is
Anton Mukhin
February 19, 2015
Fontanka.ru

Observing ardent Russian patriots, you come to some amazing conclusions. The West occupies a much greater place in their minds than Russia does, although the opposite should seemingly be the case.

For example, crooner and Russian MP Iosif Kobzon, a victim of the malicious West, just called for restrictions on Russophobes traveling outside the homeland. “Slander, spit on, and insult the country and public figures at home. But I wouldn’t let them go abroad,” he said. One cannot but admire the civic courage of a man willing literally to be spat upon by Russophobes by way of preventing them from denigrating Russia from outside its borders. And yet it is surprising, because logically it should be the other way round: the Russophobes should shove off to their beloved Gayropa, to NATO and the Banderites, and not prevent us honest Russophiles from happily living in Russia. But no, the real patriot’s main worry is how “they” treat us.

Now, when war is in full swing, such nuances are barely noticeable. Before the war, this amazing phenomenon was confirmed nearly every day. If an American broadcaster called the monument at the Brest Fortress “ugly,” the Russian Foreign Ministry shot off an angry diplomatic note. When the now almost epic character Jen Psaki showed her ignorance of Russian geography, the patriotic segment of the Russian Internet wrote only about this for something like a week. Foreign heads of state who did not come to Russia for the May 9 Victory Day parade were automatically placed on the list of fascist sympathizers. The only thing that could be worse was mentioning the role of the Allies in the victory over Germany, which in itself diminished our own contribution to the victory. So it was inevitable when the Polish foreign minister trolled us about the Ukrainians liberating Auschwitz. It is always lots of fun to mock touchy people.

Perhaps Russian patriots just have a great respect for their own history and don’t want to let anyone take the piss out of it? But it is not hard to imagine how those folks who suffer when Soviet monuments are moved in the Baltic countries or nationalists hold a rally in Ukraine would react to a neo-fascist march in an African country. They would react the same way they react to top Japanese officials visiting the Yasukuni Shrine, a shrine to Japanese war dead, including WWII war criminals: not at all. They are not interested, although the Japanese war criminals killed Soviet soldiers and were real allies of Hitler, unlike Stepan Bandera. Of course, Japan is far way, and Ukraine is nearby. But the US isn’t exactly round the corner, either, and look how the Russian patriots keep tabs on Psaki, hanging on her every word.

Russian patriots don’t care how Africans and the Japanese relate to them. Only the opinion of the advanced Americans and the Europeans matters to them. And it is only against them that we harbor an age-old resentment. We saved them from Napoleon, but instead of being grateful they attacked our city of Sevastopol. In the First World War we took the German blow on ourselves, but they didn’t help us fight the Bolsheviks. Then (by this time the Bolsheviks were now the good guys) we saved them again during the Second World War, and they paid us back with the Marshall Plan and the “evil empire.” We welcome them wholeheartedly, and they bomb Serbia and send our friend Milošević to the hoosegow. 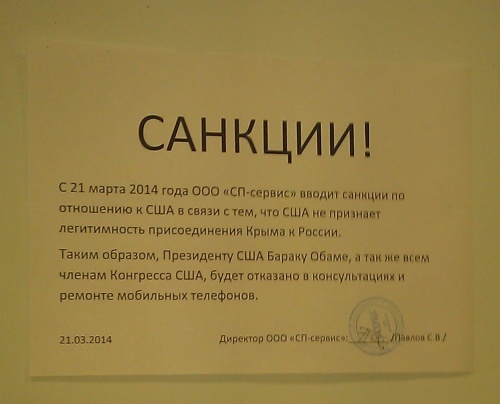 Here is the surprising conclusion: the more blatant the patriot, the more Western-centric he is. No matter how much he has daydreamed publicly about the “Chinese way” for the fatherland, his thoughts revolve only round the West. What will they say? Do they respect us? Do they fear us? Do they remember how we shed blood for them? Do they know we were first in space?

We can assume the heart of each genuine Russophile is filled with envy for happy Europeans and an unrealized desire to join the big European family, since Russia historically belongs to the European Christian civilization, and everyone living in Russia feels that there, in the West, is the center of our world, and there is no other center. In psychological terms, the experience of unrealized desire is called frustration. Frustration leads to aggression, aggression leads to alarm, alarm leads to defensive reactions. Which is what we have been seeing.

Photo by The Russian Reader. The text reads, “SANCTIONS! As of March 21, 2014, SP Service, Ltd., has introduced sanctions against the US in connection with the fact that the US does not recognize the legitimacy of Russia’s annexation of Crimea. Thus, US President Barak Obama and all members of the US Congress will be refused mobile phone consultations and repairs. March 21, 2014. S.V. Pavlov, Director, SP Service, Ltd.”