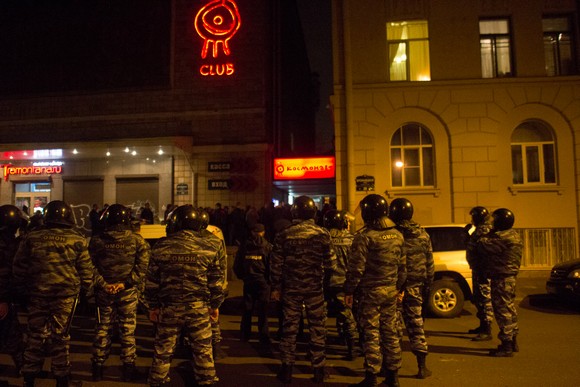 OMON police standing outside the Kosmonavt club, the venue of the canceled concert by Cannibal Corpse, on Sunday night. Photo by Sergey Chernov for The St. Petersburg Times

Eighteen music fans were detained Sunday as hundreds protested against the last-minute cancellation of a Cannibal Corpse show outside the Kosmonavt music club in St. Petersburg. The organizer, the Moscow-based agency Motley Concerts, claimed the cancellation was caused by unspecified “technical reasons,” but the fans believed it was done under pressure from the authorities.

The American death metal band’s St. Petersburg concert was set to be the last in their eight-date Russian tour in support of their 13th studio album, “A Skeletal Domain.”

Although the band’s five previous Russian tours went ahead without any problems, this year’s tour was marred by controversy caused by a massive campaign of formal complaints from Orthodox activists about alleged “Satanism” and “extremism” in Cannibal Corpse’s lyrics. Out of the eight planned concerts, the band managed to play only four.

On Oct. 11, the band’s concert in Moscow was canceled when people were already in the venue. Before that, a concert in Ufa scheduled for Oct. 5 was canceled when the venue abruptly closed “for technical reasons.” On Oct. 10, Cannibal Corpse’s concert in Nizhny Novgorod was shut down by armed masked police officers 30 minutes after it had started. A number of fans were detained and taken for compulsory drug tests. In a petition to the head of administration of Nizhny Novgorod, fans wrote that the true reason for the anti-drug operation was to stop the concert, which they believe was an act of censorship, which is prohibited by the Russian constitution.

Neither the organizer nor the venues in the four cities admitted any pressure from authorities and the band did not make any statement about the cancellations.

On Sunday, fans were not let into the venue even though it was supposed to open at least an hour before the concert’s scheduled 8 p.m. start. When asked, the guard at the doors said both the public and guests would be allowed to enter “later.”

When several hundred stood around Kosmonavt 25 minutes before the scheduled start, a young man brought a notice from the organizers and read it aloud. It said the concert had been canceled for technical reasons but ticket holders were welcome to a signing session with the band and to spend an evening in the venue.

The notice then went from one person to another until a fan set it on fire to cheers from the crowd.

Despite the invitation, the doors were still closed, leading disappointed fans to crowd around near the entrance. Soon they were chanting the band’s name as well as profane insults toward Moscow Orthodox activist Dmitry Tsorionov, also known as Enteo, and Legislative Assembly deputy Vitaly Milonov, whom they saw as responsible for the cancellation. The fans criticized the Kremlin’s current policies of isolation from the West and promotion of traditionalism.

One fan shouted an offensive anti-President Vladimir Putin slogan while another commented sarcastically about the official line of Russia “rising from its knees.”

“I would not love the Russian Orthodox Church more for this,” one fan said.

People discussed how they had been waiting for months for the concert and bought expensive tickets, while others had come from other cities and had to take days off from their jobs and find a place to stay in St. Petersburg.

Although there had only been one police vehicle parked near the venue initially, OMON riot police started to arrive at the site at 8:15 p.m. Bottles flew at the officers while people expressed their disappointment and outrage at the treatment. Cannibal Corpse’s music played loudly from one of the cars parked near the venue.

The OMON police retreated into their truck to put on helmets and take batons but did not immediately intervene, instead maneuvering in the street near the venue, blocking and unblocking it, as bottles kept coming and various fans protested in different ways. People flooded the street and passing cars had their tires pierced by broken glass.

The first arrests occurred at around 8:30 p.m., when a dozen officers rushed at two fans standing at a distance from Kosmonavt, beat them with batons and dragged them to the police vehicle. A video posted by a fan showed them apparently being beaten with a baton inside the vehicle as well. An hour later there were much fewer people in the street, with some heading home and others lining up for the signing session in the venue, which eventually started to let people enter, although very slowly after multiple checks.

According to the police, the 18 detained fans were charged either with “disorderly conduct” or with “being drunk in public,” offenses that are punishable by fines or up to 15 days in prison.