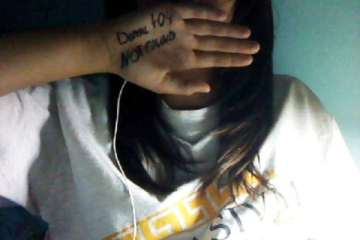 In the Fall of 2013 a Russian documentary filmmaker contacted numerous LGBTQ activists and filmmakers from Canada and the United States with whom they had worked with in previous years to screen their films.  The message they sent was a request to help fund a film that they believe desperately needs to be made: a documentary by Russian LGBTQ identified people about the impact of the recent anti-gay propaganda law on LGBTQ identified young people.  They reached out to us because this film will be impossible to make without the financial support from the international LGBTQ community since funding for such a project is not only impossible, but illegal within the Russian Federation.  So it is on behalf of our Russian colleague and their co-director that we are asking for your trust and support to help fund this vital project entitled Children 404.

Film Description from the Russian co-directors:

Currently there are about 2.5 million LGBT children and teenagers in Russia. In June of 2013 Vladimir Putin signed into law a new bill that forbids “propaganda of non-traditional sexual relations to minors”. LGBT young people are now defenseless because of this “gay propaganda” law. It is now forbidden to tell them that they are healthy and not sick, sinful, or abnormal. Psychologists, teachers, and even parents could be fined or imprisoned for supporting LGBT young people. These LGBT young people are now being bullied and harassed even worse than ever before by peers, teachers, and parents in school and out. This climate of anti-LGBT violence and harassment is permissible because of Putin’s anti-gay propaganda law.

The main character of this documentary project is eighteen-year-old Pasha, who survived much anti-LGBT harassment and intimidation at school.  After recently finishing school he became an LGBT activist. Later this year he enters a Canadian university and moves to Canada for the foreseeable future. This film will also contains anonymous interviews with young people, parents, psychologists, teachers, and priests on both sides of the issue in Russia.

All funding we gather will be transferred directly to our colleagues in Russia.  We keep nothing, nor do we act as traditional producers where we influence the content and outcome of the film.  We are simply conduits for funding since their lives would be at risk if they were to create an appeal themselves.

The simple timeline and budget shared with us by our Russian colleagues is as follows (in USD $):

As you can see, we are trying to raise a significant portion of their total budget ($10,000 USD or $10,300 CAD) while they are carefully raising funds from within their own communities to make up the difference.  Anything we raise over the goal set here will only alleviate the necessity to find funds amongst their own community in these dangerous and demoralizing times for LGBTQ people in Russia.

Directly from the mouths of our colleagues:

“This year an estimated 2.5 million LGBT children and teenagers in Russia no longer have any support. Now according to the new bill which forbids ‘propaganda of non-traditional sexual relations to minors’ supporting them and telling them that they are not abnormal is a crime.”

“The documentary project “Children 404″ is an opportunity for LGBT young people to cease being invisible by telling their stories in their own words.”

Other Ways You Can Help

Some people just can’t contribute financially, but that doesn’t mean you can’t help:

*press inquiries can be made via rconrad<at>meca<dot>edu*